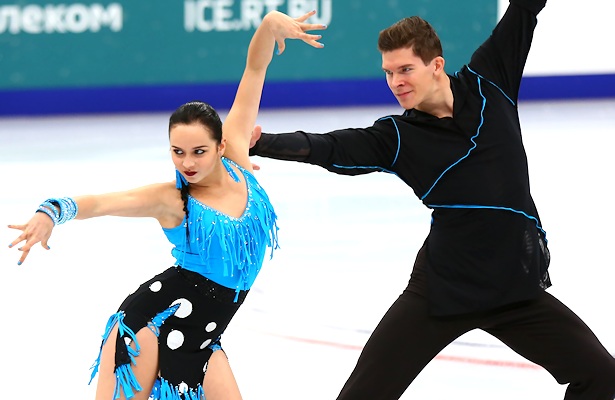 The Russian ice dance team of Betina Popova and Sergey Mozgov, who have been skating together only for two years, drew some attention last season. They are the newest of the top current Russian teams and are getting ready to make a splash this upcoming season.

While Russian ice dance may have been dominant for decades, it’s clear that the country has lost ground in the past three Olympic cycles. Tatiana Navka and Roman Kostomarov were the last Russians to win Olympic gold in 2006 in Torino, Italy. However, last year in Pyeongchang, no Russian dance teams made the podium for the first time since the sport became Olympic in 1976. With the new Olympic cycle starting and seven-time Russian Champions Ekaterina Bobrova and Dmitri Soloviev at least sitting out one season, if not retiring completely, the cards in Russian ice dance will be reshuffled.

Popova and Mozgov’s first step was to change coaches to Anjelika Krylova when the 1998 Olympic silver medalist returned to her native Russia after living and coaching in the USA for 24 years.

“When Sergei and I teamed up, we thought about going to America, but since this is so extremely expensive for ordinary Russian people, we only thought about it and that was it,” Popova shared. “We thought about different options and when we heard that Anjelika is coming to Russia, it was such great news for us. When we learned that she was interested in working with us, it was such a huge motivation for us to rush to her as fast as possible.”

Last season, the team trained under Ksenia Rumiantseva, who coached Popova for ten years. However, the skater felt that she needed a change, and as a team, more freedom.

“I’m very grateful to Ksenia Gennadievna (Rumiantseva),” said Popova, while admitting there was some strain in the relationship. “She went a long way with me, from the beginners to international master of sports, but we did with her everything that we could have done.”

On the other hand, the dancers admit that they are not easy to work with. Mozgov revealed that they were kicked out of Rumiantseva’s training group three times.

“We have explosive characters, just disgusting characters,” Popova shared. “We are terrible. We are arguing, we can fight in the dressing room. We are just very emotional, and emotions overwhelm us. We have to get them out quickly and then we can work again.”

Rumiantseva’s dance group, which was based at Khrustalnyi rink where Eteri Tutberidze and her team work very successfully with single skaters, was reduced to one hour and 15 minutes of on-ice training time, which is not enough for high-level couples. Popova and Mozgov seized the opportunity when it came and joined Krylova, who came back to Moscow in April to build a new training group together with Oleg Volkov.

“Working with Anjelika is incredibly interesting for us,” Popova said. “The vibe of Anjelika absolutely matches mine. She is very goal-oriented, but at the same time cheerful. I don’t even know how to describe it, but her vibe really suits me.”

“They are similar to each other, especially when you are watching Anjelika’s old performances,” Mozgov observed. “She was skating with the same kind of emotions.” He also likes the way Krylova coaches. “(I like) already as the minimum the fact that the coach herself is on the ice and shows everything herself and works with you that way. I can do something and Anjelika can show it together with me in the pair. This is much more comfortable than when the coach is standing behind the boards and shows you ‘do it like this’ and you think ‘how do I do it on skates?’ Working with Anjelika is much more comfortable and easier in this aspect. She has more understanding and the mentality is a bit different after all, taken from America.”

The Warsaw Cup Champions, who came in fourth in their debut at Russian Nationals last December, were excited to select their music together with Krylova.

“Before, it was like ‘here is the music and you’ll skate to this.’ Now we can suggest ourselves something and discuss,” Mozgov said. No surprise, the dance team was very happy when their new coach agreed to their choice to skate to the Russian movie soundtrack Master and Margarita by Igor Korniliuk for the free dance.

“Master and Margarita was our dream,” said Popova. “I already skated to it with Jura (Vlasenko), but we competed it twice and were told to change it. For me, this was very sad that I had to leave this program behind. I just love this character. I get into it, I live it.”

Mozgov was all for it right away. “I also wanted to skate to this for a long time, for your years already,” he revealed, “but until now, the coaching staff always said that this music has a bad vibe. There was a lot of superstition.”

Popova agrees that the dramatic, dark music is not easy to interpret. “But we’re not the kind of skaters that like lyrical stuff. We don’t want this romantic style, you suffer … that’s not us,” she said. “We’ll be like crazy and that’s us,” her partner confirmed.

The Muscovites want to put out a small spectacle on the ice, tell an interesting story in which spectators will be drawn in right away.

“We want that ice dance is like a mini show,” explained Popova. “That they are thinking about what we are skating, that the story in understandable, and that they want to understand what we want to express with this dance.”

Popova added that famous Russian coach Tatiana Tarasova approved of their choice. “She said, ‘for you, it’s perfect.’ Now we’re enjoying skating to it.”

For the Tango short dance, the team picked Alfred Schnittke’s “Tango in a Madhouse.” “So, this season, we’re carrying the subject from one program over to the other,” Popova explained. “We don’t want it to be just an abstract Tango, we want it to have a story, too.”

The dancers are excited about the rule changes that they feel will allow more freedom.

“The rules are changing now and that’s so cool, we can do new moves,” said Popova. “Everyone will now experiment. This is very interesting and we’re also looking forward to experimenting.”

“We’ll see where this leads to with these new sliding move etc. this year,” added Mozgov. “We can surprise with something. You have to set yourself apart somehow, to think of how you can do elements in an original way.”

In addition to working on their new programs, the ice dancers are also delving deeper into improving their technique.

“Anjelika teaches a completely different technique. (I feel like) I can’t skate at all and I have to learn skating from scratch,” the skater said with a laugh. “We break down the technique, but for me, this is very interesting, because you move your body in a different way. To push with the feet in a different way and I already feel it is easier and faster for me, and obviously I like it. We were all over the place, but now we keep the emotional commitment and with our body and legs, we’re trying to be calm and add softness.”

“Obviously, we sometimes freak out, feeling like we can’t do anything and nothing works, and after that, we continue and it works,” Mozgov added.

After a tough first season in 2016-17 where they struggled with injury and did not make it to Nationals, the ice dancers decided to work hard and made a lot of progress during the Olympic season.

“We decided for ourselves – either we are retiring calmly or we’re working very hard to get to the top, because we don’t like sitting somewhere in the middle,” Popova shared.

The team was very pleased with their performances and results this past season.

“Even in an Olympic season when nobody really cares about new teams, we were able to draw attention,” noted Popova. “We were more or less among the top Russian couples, skating well at international competitions, winning a Challenger and fulfilling the norm for the International Master of Sports, which is a big achievement for us. We didn’t expect that from ourselves.”

Popova and Mozgov don’t know yet which competitions they are going to attend, but they hope to receive two Grand Prix assignments and want to compete in the Challenger series and national events, as well as at the Universiade.

“At least we’ll try to consolidate our position, maybe improve it if it works out and the judges appreciate us,” Mozgov said about their goals.