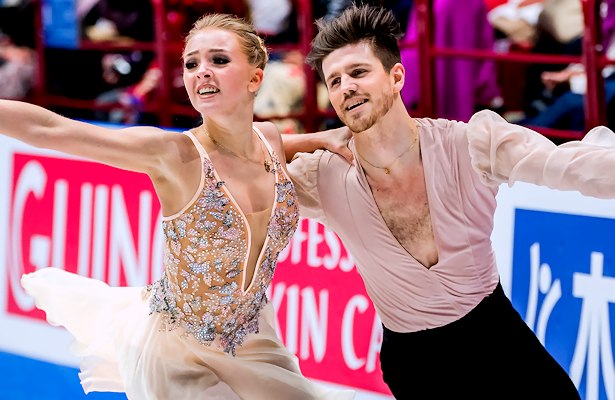 The 2018 Olympic season was a roller coaster for Russian ice dancers Alexandra Stepanova and Ivan Bukin. The Muscovites started well into the season, establishing themselves as the number two team behind fellow countrymen and multiple national champions Ekaterina Bobrova and Dmitri Soloviev. They took their second bronze medal at the 2018 ISU European Figure Skating Championships on home ice in Moscow and were selected for the Olympic team.

Then, just after Europeans, the ice dancers were told that the International Olympic Committee (IOC) did not “invite” Bukin to PyeongChang. Following the doping scandals around Russian sports, the IOC had banned the Russian Olympic Committee from the Games in South Korea, but invited athletes individually and they competed as “Olympic Athletes from Russia.”

As if this wasn’t bad enough, what made it worse was that the skaters were never given an explanation.

“Just so you know, they (anti-doping control officers) came eight times to me in the last three months before the Olympics,” said 24-year-old Bukin. “All tests were negative and they just didn’t let me go (to the Olympic Games). For what reason? Give at least an explanation. But it was just like, ‘Your’re not invited. That’s it.’ There was no way to argue.”

At the time, Bukin wrote an open letter to the IOC. In addition, Natalia Bestemianova, the 1988 Olympic Ice Dance Champion, together with Bukin’s father Andrei, collected signatures of many other Olympic Champions for another letter. However, nothing helped and the letters went unanswered.

It was a tough time for the 2013 World Junior Champions, but they kept training and prepared for the 2018 ISU World Figure Skating Championships where they finished seventh—their best result in their fourth appearance at the event.

“Even in the difficult moments, we tried to find something positive,” said Stepanova, 22. “You have to do that, otherwise you can get crazy. The positive things are that we were able to confirm our position as bronze medalists at Europeans and that we skated well at Worlds. It was very important to us, because we really wanted perform at the last competition of the season and give it our all.”

Despite the bizarre incident, the skaters did not think about retiring or parting ways when they were not admitted to the Games.

“We could have thought about that if Vania (Ivan) was 30 years old, but we’re just starting our senior career,” Stepanova pointed out. “I believe only in this past season people started looking at us as a senior team. We have still other Olympic Games, World and European Championships ahead of us, and we hope that a situation like that won’t happen again.”

After Worlds, the two-time European bronze medalists took a short break and performed in a few shows before starting to work on the Tango Romantica short dance, which will be the pattern for the Rhythm Dance in the upcoming season. In April, the dancers mounted their new free dance with choreographer Peter Tchernyshev, who already had choreographed the past few seasons for them.

The Russian silver medalists and their coaches are not ready yet to reveal the name of the music, but said they have chosen a Blues piece for the free dance. The skaters enjoyed working with Tchernyshev again.

“As for Petia (Peter), the Tango that he did for us (two years ago) and this program now are really his theme,” Stepanova said. “I think that the program is very cool. The coaches like it and Vania’s parents (former ice dancer Elena Vasiuk and 1988 Olympic Champion Andrei Bukin) and Natalia Bestemianova came to the rink to watch and they liked it as well. This program suits us really well and we have fun with it. However, it is not easy. The program is completely different and not like last year’s program at all.”

Bukin admitted that the team had trouble choosing the music at first, but then Tchernyshev suggested a piece. “When we went to practice with him and he started to show us some things and we did what he showed us, I immediately realized that this program would be great,” he said. “Petia feels the Blues very well and he tried to pass this on to us and we tried to soak up everything during this time.”

Coaches Irina Zhuk and Alexander Svinin feel that their top students look different in this new free dance and the skaters feel the same, but they don’t want to reveal too much yet. “You’ll see at the beginning of the season. In September (at the test skates), we’ll show everything and I hope you’ll see different moves and a different kind of emotion,” Bukin said.

The team also likes the Tango theme for the Rhythm Dance, but they admit that the Tango Romantica was a challenge for them at first. “This compulsory dance is kind of difficult, but very interesting and I think it works quite well for us,” Stepanova said. “I like Tango… this sharp and powerful emotion,” added her partner.

Zhuk and Svinin are very happy about the rule changes for ice dance and feel there is more freedom now, for example, in the lifts.

“The creative step sequence makes it possible to perform with more emotion,” Svinin said. “I think the changes will make ice dance more interesting for the spectators.” Zhuk likes the fact that the twizzles are now judged separately, so if one skater makes a mistake, not as many points are lost as long as the partner’s twizzles are good.

Stepanova thinks that the new rules help to integrate the technical aspects better into the programs and not just focus on individual elements. Her partner, Bukin, feels that ice dance is going to focus more on the choreography again, which he appreciates. He feels that the ISU is trying to change the balance a bit more in favor of choreography.

“This is what used to set us (ice dance) apart so that there are less technical elements, but more emotions,” he explained. “I think that is the right path, because dance was always interesting because of the ideas, the programs, the interaction between two people and not just because of difficult elements that everyone is trying to do.”

With seven-time national champions Bobrova and Soloviev not competing this season, Stepanova and Bukin look like the heirs apparent, but they don’t take it for granted that they will be the new number one in Russia.

“We don’t even think about that. We are working on improving and on trying to take the next step up,” Bukin said. “We really want to better ourselves and it’s not about beating our rivals at any costs,” Stepanova agreed. “If we skate well, if we really improve, then we’ll be where we belong.”

An important goal for next season for the young team is to be able to show their very best in competition. Currently, they feel that thus far, only their coaches have seen them skate with “full power.”

“We want to be able to show the very best versions of our programs in competition,” Stepanova pointed out, adding that she felt that nervousness and the competition atmosphere in general affected them in the past.

Stepanova and Bukin, who are scheduled for the Grand Prix events in Russia and Finland, hope to qualify for their first Grand Prix Final after being substitutes last season.

“It’s a four-year-game,” Bukin noted. “It will be an important season, the beginning of a new stage. Everyone will try to surprise, I’m sure. All these (new) rules push people for changes and that will be very good, because we (ice dance in general) were stagnating a bit.”

“We want to start the season with new energy and a clear head,” Stepanova concluded.