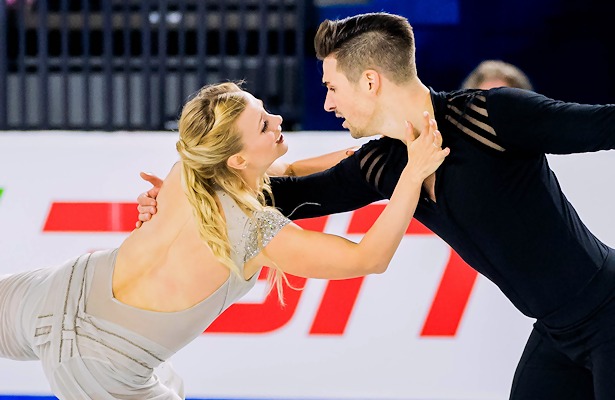 USA’s Madison Hubbell and Zachary Donohue repeated their grand prix success with another victory this week, taking gold at Skate Canada with a score of 200.76. Russians Victoria Sinitsina and Nikita Katsalapov earned the silver medal with 195.17 points. Piper Gilles and Paul Poirier of Canada redeemed themselves after a fall in the Rhythm Dance to snag the bronze medal with 186.97 points.

Hubbell and Donohue emoted every note of music in their compelling “Romeo and Juliet” free dance. The routine by the current World silver medalists was punctuated by four level four elements and the competition’s strongest program components scores.

“I think we are very pleased,” Hubbell reflected. “We wanted to challenge ourselves to become champions in difficult situations and we knew that it was going to be really challenging to do two grand prixs back to back at the beginning of the season. Certainly, we felt that, we were really tight today. It was a testament to our strength of partnership that we were able to get through it as best as we did.”

“We are definitely feeling the fatigue and looking forward to a break,” said Donohue. “But at the same time, I think we are really thrilled that we were able to stay in the moment, create our own bubble and find ourselves out there and get lost in the program the way we love to.”

Sinitsina and Katsalapov delicately presented their “Air” free dance, accenting their long lines and grace. They received level four grading in five of their elements to the soft routine which edged both the Americans and Canadians by fractions of a point.

“We are improving and we have improved,” Sinitsina said about the team’s strong return to competition.

“Our next event is the grand prix in France in one month’s time, so we will work day and night to get these key points and work on the other elements,” Katsalapov said, looking forward towards the season. “It is our goal to make the Grand Prix Final.”

Gilles and Poirier rebounded from their disappointing rhythm dance with a commanding free dance that captivated the home country audience. Skating to “Vincent (Starry, Starry Night),” the earnest team wove sparkling elements between patterns of intricate and novel footwork. The team performed five level four elements and even received a perfect 10 in program components for composition.

“This program itself is our baby, we built this from the ground up,” Gilles said, proud of the team’s achievement.

“We have created a standard for ourselves and we know what we can perform under and going out and not having that yesterday, we all felt that heaviness,” Gilles reflected. “Today we wanted to make sure we felt composed and make sure to show our training and show our confidence. It was a great moment for all of us.”
France’s Marie-Jade Lauriault and Romain Le Gac finished fourth with 180.32 points while Olivia Smart and Adria Diaz dropped from third to fifth (176.57) after the free dance.