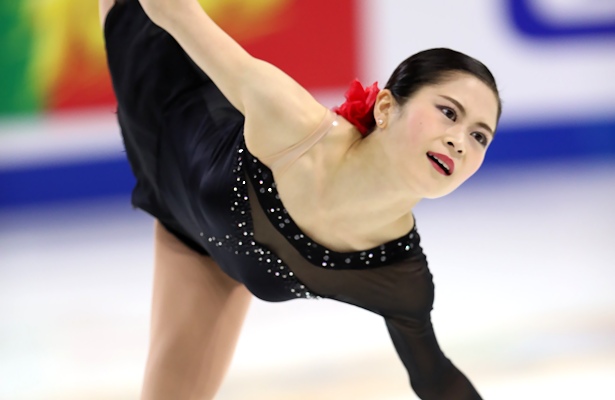 With the exception of a edge call on a triple flip, Miyahara was otherwise perfect in her tango routine to “Invierno Porteno” by Astor Piazzolla. The defending champion landed a total of seven triple jumps and showed level 4 spins throughout to finish first (142.61) in the free skate and overall (219.71).

“I am very happy to skate very clean today,” said the 20-year-old. “I was very nervous until the very end of the program, because I have jumps until the end. I hope I’ll have more confidence in my next competition.”

Sakamoto also gave a near-flawless performance to music from the The Piano soundtrack. The 2018 Four Continents Champion skated with good speed and technique, landing seven triples (edge call on a Lutz) and earned a level 4 on all spins and footwork. She was awarded 142.61 for a second-place finish in the free skate and overall (213.90).

“I am very satisfied with my performance today and I hope it will encourage me for my future competitions,” said the 2017 Japanese national silver medalist.  “I will keep working hard towards my next Grand Prix in Finland.”

Samodurova also produced seven triples (edge call on a flip) in her sassy routine to music from the Burlesque soundtrack. The 2018 Lombardia Trophy silver medalist earned a level 4 on all spins and showed strong level 3 footwork to place third with 134.29 points in the free skate and overall (198.70).

“I am very happy to skate clean,” said the skater from St. Petersburg. “I hoped that I would be in third place after the free skating today, but I think nothing changed in my approach.”

USA’s Bradie Tennell put out a technically strong performance to Prokofiev’s “Romeo and Juliet,” which featured strong level 4 spins and footwork, but the 2018 Autumn Classic champion under-rotated several jumps to come in fourth (131.17). However, with a total score of 192.89, managed to move up one spot to fourth overall.