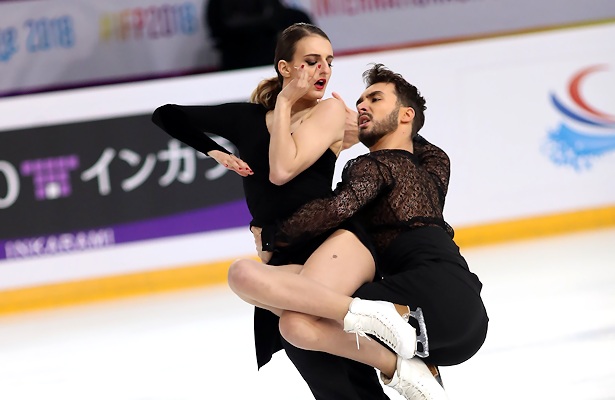 Gabriella Papadakis and Guillaume Cizeron of France are in a comfortable lead after the Rhythm Dance in Grenoble, France. Russia’s  Victoria Sinitsina and Nikita Katsalapov are currently in second followed by Canadians Piper Gilles and Paul Poirier.

The team had to withdraw from NHK Trophy earlier this month after Cizeron fell and injured his back during practice. As as result, this is their only Grand Prix event which means they cannot qualify for the Grand Prix Final.

The Olympic silver medalists showed strong level 4 twizzles which garnered mostly +4 and +5 grades of execution (GOE) from the judges in their tango to music from Astor Piazzolla. The team also met five of their eight key points in their patterns and displayed level 3 strong midline steps as well as a level 4 curve lift.

“We are very happy with our performance today, especially for our first competition,” Papadakis said. “We really love this program.”

“We don’t find it (the Tango) harder than other short dances that we’ve done,” Cizeron said, when asked about the dance. “Tango is a universal language; everybody knows what it is about. It just feels natural to our bodies.”

Sinitsina and Katsalapov also delivered a solid Rhythm Dance which featured strong level 4 twizzles and rotational lift. The 2018 Skate Canada silver medalists earned a level 3 on both patterns and scored a new season’s best of 77.91 points.

“We have worked with the best Tango ballroom dancers in the world, Dmitry Vasin and Sagdiana Hamzina, so a big thank you to them,” Katsalapov said.

“We have not yet reached our maximum and we’ll continue working on the chemistry and the relationship between us and that fire,” he added.

Gilles and Poirier sit in third place with 74.25 points after their performance in which they earned a level 2 on their twizzles and circular steps. The 2018 Nebelhorn Trophy champions otherwise showed a nice level 4 rotational lift at the end of their routine to “Angelica’s Tango” by Piernicola Di Muro.

“We really took our time and enjoyed the performance, because this is a program that both of us truly enjoy,” Gilles said. “We’re really excited to go into tomorrow and skate a great free dance. We’re really proud of this artistic program and it’s going to be great.”

USA’s Kaitlin Hawayek and Jean-Luc Baker, who won gold at NHK Trophy, are fourth, followed by Olivia Smart and Adria Diaz of Spain.