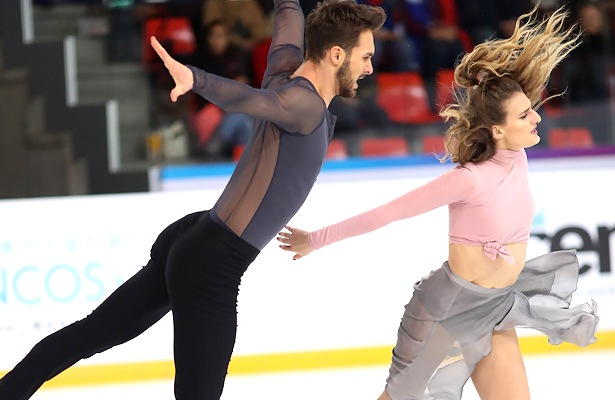 Gabriella Papadakis and Guillaume Cizeron of France maintained their overnight lead to win the gold at 2018 Internationaux de France on Saturday afternoon while setting  new Progression of Highest Scores for the Rhythm, Free Dance and Total Score at this event. Russia’s  Victoria Sinitsina and Nikita Katsalapov won the silver and a ticket to the Grand Prix Final (GPF), while  Canadians Piper Gilles and Paul Poirier earned the bronze.

Papadakis and Cizeron were flawless in their routine to “Duet” and “Sunday Afternoon” by Rachael Yamagata which featured solid level 4 twizzles and lifts, as well as rare level 4 for their diagonal steps. The Olympic silver medalists earned mostly +4 and +5 grades of execution (GOE) on all their elements and were awarded 132.65 points for first place in the Free Dance and overall (216.78).

“We are really happy with what we have done today,” Cizeron said. “We didn’t expect to have such a great score, so we’re very happy with the technical aspect of our program and we had a really good moment on the ice.”

“I feel like we shared a very good moment with the audience,” he added. “It was the first time we’ve done our free program this year, so we had a little bit of stress, but I feel the audience connected to it.”

As this was a solo Grand Prix event for the three-time and current World champions, they will not be participating at the GPF.

Sinitsina and Katsalapov bested the French team’s score on the level 4 twizzles with higher GOEs in their routine to music by Bach and Fritz Kreisler. The Skate Canada silver medalists also delivered level 4 lifts and strong level 3 serpentine steps to earn a new season’s best of 122.47 for second place in the Free dance and overall (200.38).

“We are very happy with how the season has been going for us so far,” Katsalapov said. “We really enjoyed the competition. We got a season’s best in both programs and we couldn’t be happier right now. We skated for each other.”

Gilles and Poirier were smooth in their dance to “Vincent” by Don McLean, earning a level 4 on two of their lifts and dance spin to score a new season’s best 114.49 for third place in the Free Dance and overall (188.74). They are now second alternates in the GPF line up for Ice Dance.

“Of course, we’re a little bit disappointed not to qualify for the Final in this Grand Prix season,” he added. “We had very tough events with deep fields. We need to look at the levels in our program that were very low at this event to make sure we’re ready for the Championship season.”

USA’s Kaitlin Hawayek and Jean-Luc Baker earned a level 4 on their twizzles, lifts, and dance spin, and finished in fourth place overall (181.47). Combined with their win from NHK Trophy, the Four Continents champions earned a ticket to the GPF.

Olivia Smart and Adria Diaz of Spain slipped from fifth to eighth after Diaz took an uncharacteristic fall during the midline step sequence.