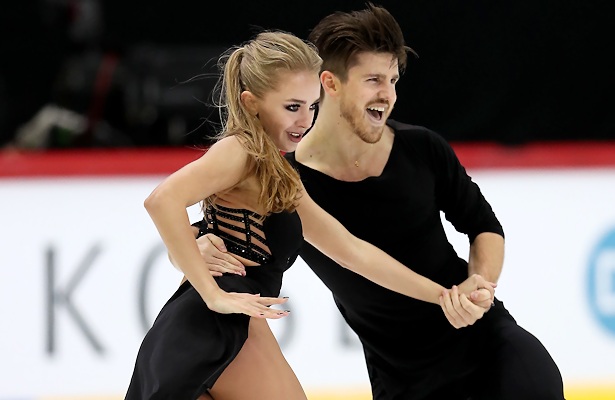 Stepanova and Bukin delivered a steamy blues routine to “Am I the One,” which featured intricate diagonal steps, difficult level 4 lifts, and strong twizzles. The two-time European bronze medalists earned a new season’s best of 121.91 points for a first-place finish in the Free Dance and overall (200.09).

“We are very happy to have taken first place in the Grand Prix for the first time,” said Stepanova. “This is a step forward for us. We hope to skate even better in our next competition.”

“We were very happy to find out the Grand Prix would be in Finland,” said Bukin. “We’re really proud of this result and we hope it will push us further. Our coaches were extremely pleased that all the work we’ve put in paid off.”

Guignard and Fabbri produced a fun program to music from La La Land which featured unique lifts and a good circular steps, however, Guignard fell on an in-between step.

The Italians still scored a season’s best of 118.93 points for a second place finish in the Free Dance and overall (196.29). This second silver medal on the circuit should be enough to get the team into their first Grand Prix Final.

“Even though we didn’t have a lot of time to work after Skate America, we still made some improvements and the segment score today proved it,” said Fabbri. “Unfortunately, there was a really stupid mistake that we were not expecting, but it was not in an element. We were close to 120 points in the Free Dance, so  we are still very happy.”

“It is a great feeling (to qualify for the Grand Prix Final for the first time),” he added. “We got our first medal at Skate America, now this second medal and the ticket to the Final. This really motivates us.”

McNamara and Carpenter were smooth in their routine to music from Yann Tiersen, however, the 2018 Ondrej Nepela Trophy lost two points for two extended lifts. They finished fourth in the Free Dance with 105.26 points, but remained in third place overall (176.66 points).

“We’re very happy,” said McNamara. “This is our first Grand Prix medal and something to be proud of,” McNamara said.

“We’re really excited to be here,” added Carpenter. “Having two Grand Prixes this season was a great opportunity for us and we’re really proud to take home the bronze from this one.”

Sara Hurtado and Kirill Khaliavin of Spain were ranked third in the Free Dance with their program to “Great Gig in the Sky” and “Sign of the Times” to move up one spot to fourth place (172.09 points). The 2018 World Junior silver medalists Christina Carreira and Anthony Ponomarenko (USA) finished fifth in their Grand Prix debut on 167.28 points.