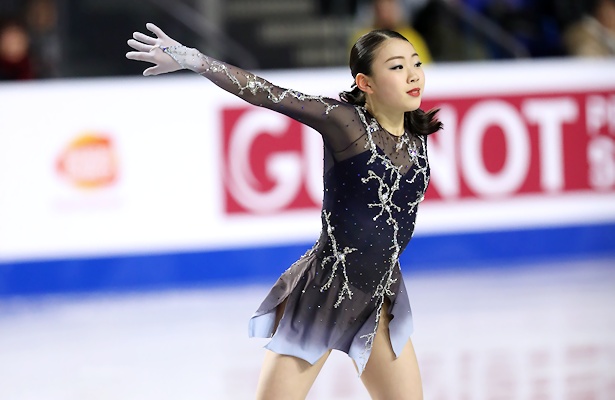 Rika Kihira of Japan performs her Free Skate at the 2018-19 Grand Prix Final of Figure Skating.

Rika Kihira of Japan continued to ride the wave of gold-medal success this season in Vancouver, Canada, clinching a victory at her first Grand Prix Final. While she botched the opening triple Axel, Kihira followed up with a precise triple Axel-double toe loop combination and six other triples in her soulful program set to “Beautiful Storm” by Jennifer Thomas. The judges rewarded her ambition and finesse with a free skate score of 150.61 for a total competition score of 233.12.

“In terms of performance, it wasn’t something that deserves the win I thought but I am so happy with my score,” said Kihira. “Right after I made a mistake on my first triple Axel, I knew I had to jump all the other ones after properly as this is the Grand Prix Final and I have no other choice but to land successfully. I told myself after the mistake that this is a challenge I need to overcome.”

Alina Zagitova of Russia had to settle for silver with her dynamic “Carmen” program that featured six triple jumps and all level four spins. The 2018 Olympic Champion put only a single toe loop on her planned triple Lutz-triple loop combination which helped to hand Kihira the top step of the podium. She finished the night with a score of 148.60 in the free skate and 226.53 overall.

“Obviously, you always want to be first, but this is not going to happen every time,” said the former Grand Prix Final Champion. “I want to skate well throughout the rest of the season. I am not to happy about my performance, because my goal is to skate clean. I also felt that I was tense, but I am glad that I was able to skate the rest of the program clean.”

“I seem to do everything fine at practices,” said the pupil of Eteri Tutberitze. “But here, I don’t know, maybe I need to make changes in my mental preparation. I need to skate like I do at practice and not to think about anything else.”

Teammate Elizaveta Tuktamysheva continued her post-Olympic comeback campaign by winning the bronze medal in Vancouver with her playful free skate set to “You Don’t Love Me” and “Petite Fleur.” The effort, which featured a triple Axel that had a three-turn landing and seven other triple jumps including a triple Lutz-triple toe loop combination, earned 144.67 points from the judges to finish the competition with 215.32 points.

“My Axel showed me that I am in good form because it turned out to be very strong and high, but because of that, it was a bit harder coming out of it,” said the pupil of Alexei Mishin of the big trick. “The rest of the program, however, went very smoothly and I was able to implement the changes in the program. I will now be more confident at the Russian Nationals.”

Kaori Sakamoto performed elegantly to “The Piano” but fell on her three-jump combination to finish fourth with 141.54 points in the free skate and 211.68 points overall.

“While I made a mistake, the fact that I got such a score is very good,” said the 2018 Four Continents Champion. “If I put a little more into it, I know now that I would have received a better score. I was really happy that I managed to get through the skate while being in such a nerve-wracking state. My body went sideways on the combination, but I thought I would have landed it. I have always been able to make up for that in practice. It might have been a little low today, so I couldn’t. I went into the first flip and toe loop with as much enthusiasm I had, so it was landed really cleanly.”

In her Grand Prix Final debut, Sofia Samodurova of Russia gave a rousing performance to “Burlesque” that featured seven triple jumps and all level four spins. The judges rewarded the spunky teenager with 136.09 points in the free skate to finish the event with a total combined score of 204.33.

“I don’t know if my tears were the happiest, but they were sincere,” she said after her skate. “My achievements are the result of my coaches’ help and the work that we have done after the previous competitions in this Grand Prix season, as well as during the summer. I was a little nervous during the warm-up since I fell and hurt my hip, so I am happy I was able to collect myself during the performance.”

“Of course, I was hoping to achieve it,” the Rostelecom Cup silver medalist said of her personal best score. “This is what I was working towards. Achieving the season’s best was great. I believe that today I did everything to the maximum.”

Satoko Miyahara of Japan was stunned to find herself in last place in Vancouver after a strong season start in the Grand Prix Series. Three under-rotation calls in her triple Lutz attempts and the triple flip prevented her return to the Grand Prix Final podium. Her tender performance to the tango “Invierno Porteno” helped bolster her score of 133.79 points. She finished the competition with a total score of 201.31.

“Compared to the short, there were parts that weren’t the best,” said the 2018 World bronze medalist. “But I think I did well in recovering after the mistake. There were also better jumps, but overall it was so-so. After yesterday’s mistakes in the short, I was able to make it up in the free. I don’t want my standing at the moment to get any lower and it’s not like it can be lower than sixth place. But I’m the only one who can do this, so I need to do it properly. I need to focus on what I can do, so all I can do is put my everything into doing my best, is what I was thinking. It was a frustrating competition, but I think it will be helpful for the future. I’m still in the middle of the season right now, so I will reorganize myself and hopefully grow a little more.”