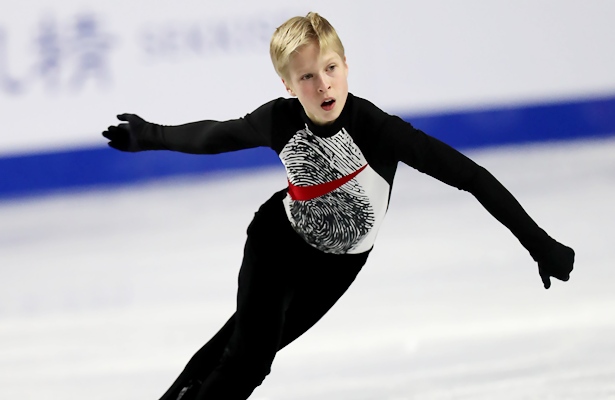 Canada’s Stephen Gogolev, who was an alternate for the Junior Men’s event, managed to capture gold at the 2018-19 Junior Grand Prix (JGP) Final in his first season on the circuit. With nearly 15 points to spare. Petr Gumennik of Russia moved up from third to take silver, while Japan’s Koshiro Shimada earned the bronze.

Gogolev under-rotated and fell on his opening quad Lutz and later under-rotated a quad Salchow (in combination with a double toe), but managed to land a solo quad toe in his energetic routine to music from the Sherlock Holmes soundtrack. The13-year-old, who is coached by Lee Barkell, also managed two triple Axels and showed level 4 spins and strong level 3 footwork to earn a new season’s best of 154.76 for a first place finish in the free skate. With a combined total of 233.58 points, the JGP Bratislava champion rose from second to capture the gold in his JGP Final debut.

“I don’t even feel like I’m here,” said the youngest competitor at the event. “It just feels like it’s another competition for me. I was a bit nervous, but it was ‘normal’ nervous like any other competitions.  I practiced three quads- quad Lutz, quad Salchow and quad toe everyday.”

Gumennik opened his “Romeo and Juliet” routine with a solid quad Salchow, followed by a triple Axel-double toe-double loop. The skater also landed another triple Axel, but later under-rotated and stepped out of the back end of a triple Lutz-triple toe. The JGP Richmond champion displayed flexibility in his spins , two of which were graded a level 4, and finished second in the free skate and overall (142.59 / 218.75).

“Yes, I think I was expecting a medal,” said the 16-year-old. “Here,  everyone is a competitor. “We are all at the same level, and you can end up being the first and the sixth. Any medal is great, but of course the first place is the best.”

The skater has worked hard this season and feels that his confidence is growing.

Shimada showed good speed and power throughout his routine to “Winter in Buenos Aires” by Astor Piazzolla. The JGP Linz silver medalist pulled off a quad toe and triple Axel. He also put a hand down on the back end of a double Axel-triple toe and later fell on triple flip, but stayed in character and smiled throughout his routine. He finished fourth in the free skate (140.41) and third overall (214.38).

“I was able to enjoy the performance today despite the fact I was more nervous than yesterday,” admitted the 17-year-old. “I was doing well in the morning practice, so I was able to do a quad toe loop. ”

The skater said he lost focus during the first half as he was too focused on the quad.

“I could feel the improvement in my performance and that was the happiest part,” he said. “When I was about to jump the triple Axel, I lost the balance, so I left out another jump because all I could think about was about the combination.”

“My coach pointed out my flip right after the performance so that remains as my challenge,” the JGP Austria silver medalist concluded. “This competition made me realize I have a chance to win a competition,  so that made me want to face challenges. Even though I was aiming for 150, I think the score I got today reflected my performance today.”

Adam Siao Him Fa of France gave an inspiring routine to “Take Me to Church,” showing his best performance of the season and scoring a season’s best of 140.56 for a third-place finish in the free skate. The JGP Armenian champion landed two quad toes, one in combination with a double toe, as well as two triple Axels. The skater had an under-rotation in a triple combo jump, but otherwise showed two level 4 spins. Unfortunately he received a one-point deduction for a time violation. Nevertheless, the skater still scored a new season’s best total of 207.04 to move up to fourth place overall.

Fa was very happy with how his free program went, taking lessons from yesterday in that he was able to control himself and his adrenaline better. His next event is the French nationals and his hopes are to qualify for Europeans.

“I (also) want to go to World Juniors where I am aiming for a top three finish,” said the 17-year-old who has been training with Brian Joubert for two seasons.

“In this short time I have made a lot of progress,” Fa said of his results working with Joubert. “He has lots of experience in figure skating, so I am learning a lot from him, especially in terms of controlling myself for competitions and so on. I am really happy that he took me on, and I feel lucky to be working with him.”

USA’s Tomoki Hiwatashi under-rotated four jumps in his dramatic routine to “Fate of the God” by Steven Reineke to finish fifth (128.32) in the free skate and sixth overall (190.80).

The 2016 World junior bronze medalist was relieved after the event as he also felt disappointed after the short program.

Nevertheless, the JGP Canada silver medalist is happy to have qualified for the Final for the first time.

“I was able to meet my seniors and talk to them a little, ” said the skater who trains in Colorado Springs, Colo. “Being able to do things like that makes (skating) really fun. There’s only the party left, so I will enjoy it.”

Teammate Camden Pulkinen also struggled with jumps throughout his “Westside Story” routine, falling on three. The overnight leader finished sixth (117.37) in the free skate and slipped to fifth  overall (197.68).

The skater was clearly very disappointed in what he put out on the ice.

“I think it was a learning lesson for me because I trained the short program so well in so many consistent run-throughs, and the long (program) hasn’t been there in training as much as I would have wanted it to be,” said the JGP Czech Skate silver medalist. “This is a reminder for me to really put importance on both programs. I think skating after Stephen (Gogolev), if I had trained a little better and had more clean repetitions, I would have had a better outcome here, so I just learned from it today.”