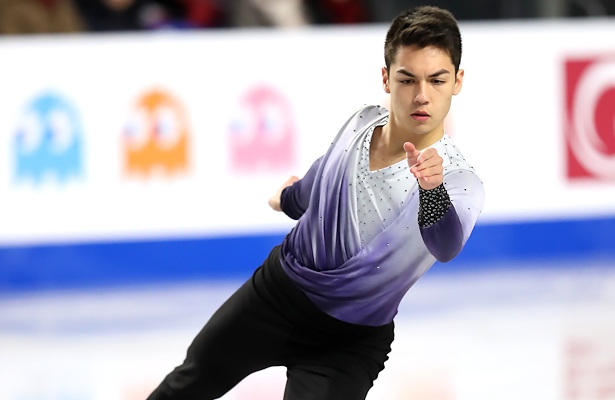 USA’s Camden Pulkinen currently sits in first place after the Junior Men’s Short Program at the 218-19 Junior Grand Prix Final. Stephen Gogolev of Canada, who is coming into the event as an alternate, is in second followed by Russia’s Petr Gumennik.

Pulkinen gave a solid routine to “Oblivion,” which featured a strong triple Lutz-triple toe and triple Axel, however, the 18-year-old had to fight for the landing of triple flip. The skater from Colorado Springs, Colo., also showed strong level 3 footwork and earned a level 4 on two of his spins to score 80.31 points.

Camden was second at this event last year, and his goal this year is the same: to put out complete performances.

“I think that takes care of the outcome goals,” said the JGP Linz champion. “I think every event is different.  This is a little bit different than last year in Japan, especially with the travel, it was a lot further. So this was a five-hour flight here, so not a lot of jetlag, pretty comfortable with Vancouver. It is a very nice city here, so just happy to be here.”

Gogolev was focused in his routine to “Run Boy Run,” which featured a solid triple Lutz-triple toe, triple flip, and triple Axel. The skater, who is coached by Lee Barkell, earned a level 4 on all spins and scored a new season’s best of 78.82.

“It feels good to have a season’s best at the Grand Prix Final and it’s my first (Junior) Grand Prix season,” said the Canadian.

“I was really happy, but not because someone pulled out, but because I was the one going,” he added regarding being an alternate and having the opportunity to compete. “And I was really excited. I am ready for tomorrow.

Gumennik, who has shown much improvement since his JGP events in Ljubljana and Richmond, landed a triple Axel, triple flip, and triple Lutz-triple loop. The 16-year-old from St. Petersburg  earned 76.16 points for his routine to “Czardas” by Vittorio Monti.

“I think the only way to get a higher score would be getting quad toeloop,” said the JGP Richmond champion. “To be honest, I do not think about the scores, I think about the performance, that is the most important part for me.”

“Overall, I completed almost all of my elements,” noted Gumennik. “There were a few shortcomings, which only I noticed.

“This competition is so important that being a part of this is an achievement,” he said of his JGP Final debut. “It is not very scary. Overall, I was very good with my nerves. It is a different atmosphere, the crowd is bigger and the competition is more official. I was warming up and preparing for the performance as usual, not very different from other competitions.”

Koshiro Shimada of Japan was engaged and committed to the choreography in his routine to “Adios” by Benjamin Clementine. The skater, coached by Stephane Lambiel, stepped out of a triple Axel, but showed a good triple Luz-triple toe and triple flip as well as two level 4 spins. He sits in fourth with 73.97 points.

“I was able to perform today without getting too nervous,” said the JGP Linz silver medalist. “I made a mistake on my triple Axel, however, I was able to continue my performance and finished it well. Tomorrow I would like to show everyone my skating skills and all what I have as a skater.”

“It will take a long time for me to reach to my coach’s level and to even mention his name seems too out of reach for me at the moment,” he responded when asked about being coached by two-time World Champion Stephane Lambiel.

France’s Adam Siao Him Fa showed passion in his routine to music from Two Steps from Hell in which he earned a level 4 on footwork, but the 17-year-old struggled on his jumps to finish fifth with 66.48 points.

“I am very happy to participate,” said the skater on being the first French male participating a Grand Prix Final in a long time. “It’s a ‘top’ event and I was even maybe overexcited to be here.”

“It (performance) did not go super well,” said the student of Brian Joubert and Cornelia Paquier. “I still have a little bit of work to do on my mental performance because I was overexcited. I have to settle down [in order to get ready for tomorrow].

USA’s Tomoki Hiwatashi popped a triple Axel and struggled with the landing of a triple Lutz-double toe and is currently in sixth (62.48).

“I mean I was back a few months ago for the Junior Grand Prix for the fourth one (season),” said the 18-year-old. “This time I was a little nervous, a little bit anxious. I am not too excited about this, what I did, but I will try my best on tomorrow, and see how it goes.”

I have never actually competed against these top skaters in Juniors, and it is also my first time in the Final so that might have gotten to me,” confessed the skater who trains in Colorado Springs, Colo., under Christine Krall and Damon Allen. “That might have made me feel a little bit anxious, but I mean it is not an excuse.”