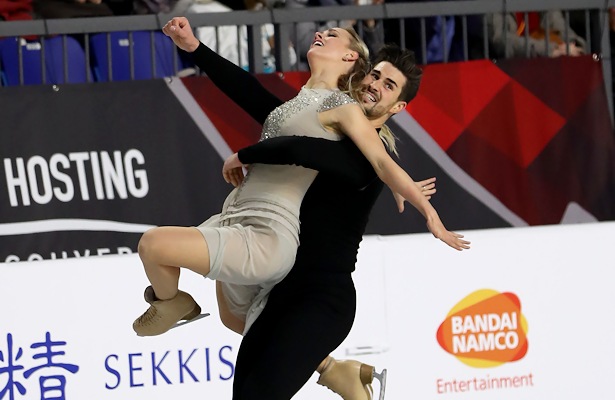 USA’s Madison Hubbell and Zachary Donohue vindicated three years of consecutive medal losses at the Grand Prix Final to win the event in Vancouver with a passionate free dance and season’s best scores.

The Americans powered across the ice in their re-worked “Romeo and Juliet” free dance which featured dramatic lifts, level 4 twizzles, strong level 3 diagonal steps, and the night’s best program component scores. Judges rewarded them with a personal best free dance score of 124.82 and total event score of 205.35. The 2018 U.S. National Champions made extensive changes to the free dance following Skate Canada.

“I think we achieved what we wanted to which was to pull out the performance,” Hubbell said. “We finished not knowing exactly what the score would be because, a little bit like yesterday, we went fully into the character of the program, and being so new, there were plenty of little bobbles and places to lose points. The protocol isn’t completely clean yet, but we were able to really pull up the GOE and pull up the PCS in order to give us a season’s best, so we are very proud.”

“This character, if we really dive into it, it’s obvious to feel the emotion,” said Donohue about his noticeably expressive skating. “We are sharing between the two of us and we do have such a strong connection that it’s hard to fake it. It’s very genuine and real for us. It’s a mix of ‘Holy bleep, my Juliet is dead!’ and ‘Holy bleep, I’m dying!’ because you know it’s the first time, so there was a little bit of that pressure behind it.”

“To reach for the highest level and to reach for that World Championship title, we had to stop being afraid of mistakes and just start going for it when it counts,” said Hubbell of the team’s mindset, moving on from past competition mistakes. “It’s a whole new era for us, so as much as we can, we want to go for the gold at every single competition. We had great examples with Gabriella (Papadakis)  and Guillaume (Cizeron) and Tessa (Virtue) and Scott (Moir) over the last few years of how exactly to step into that energy of perfection and excellence over and over again, and we feel like we have really allowed ourselves the freedom to step into that energy. We are very excited for what the future holds. We were silver last year, why wouldn’t we reach a little bit more and go for gold?”

Russians Victoria Sinitsina and Nikita Katsalapov clenched the silver medal with a smooth and dramatic performance to Bach’s “Suite in D Air” highlighted by multi-position level four rotational lift, level 4 twizzles  that garnered many +4s and +5 GOES, and strong level 3 serpentine steps. The team earned a personal best free dance score of 124.04 to finish the competition with 201.37 points.

“I was not nervous this time performing, and that is a new state of mind for me when I don’t feel nervous before the program, and I think that’s a really good thing,” reflected Sinitsina, a pupil of Alexander Zhulin. “This competition was actual bliss for us, and we really enjoyed it.”

“Personal best, it feels good,” added Katsalapov, a member of the 2014 Olympic gold medial winning team. “This is amazing to skate here. We believe that we had a strong start of the season, so we’re looking forward to continuing that trend. Russian Nationals is coming up, and we have one more week of training before the Nationals, so we’ll keep fighting. We want to prove that we’re number one in the country.”

Italians Charlene Guignard and Marco Fabbri maintained the momentum sparked by their second-place finish in the rhythm dance to win the bronze medal during their expressive performance to “La La Land.” Their free dance featured six level four elements, including a stunning stationary lift, to earn 120.35 points. The duo finished the competition with 198.65 points.

“We’re feeling great, we just wanted, as we said yesterday, to perform our best, and I think that we succeeded, so we’re very, very happy,” said Fabbri. “It wasn’t easy to skate last today, even it’s a small group, just because of the pressure on ourselves, not because of the results of others. But we’re very happy and proud of how we manage our first important competition. We’re really excited and looking forward to the next event. The goal is to continue improving and to continue showing that we are really there. We’re one of the top competing couples showing it. We showed it at the Grand Prix qualifying competitions, we’re showing it at the Final, so we’ll continue to follow the pattern.”

Alexandra Stepanova and Ivan Bukin of Russia settled for fourth place with their sultry performance to “Am I the One” by Beth Hart. The routine included five level four elements as well their signature low-positioned choreographed twizzle element to conclude the program. The rising team was dissatisfied with the free dance score of 119.52 due, in part, to problems in the twizzle sequence. Their final competition score was 196.72.

“We don’t understand by ourselves what happened,” Stepanova said of the scores. “Everyone is trying their best, not just us. It means we have to skate much better than everyone, so nobody has any doubts, nor spectators, nor judges. I think yes, we hoped to be a few steps higher, however the Rhythm Dance was pretty good. The level of skating was fairly high. Such a small mistake shouldn’t have affected the scores, so we are still trying to understand. We will review the skate and make conclusions.”

“Yes, there was a little mishap on the twizzles,” added Bukin. “They were not parallel. Otherwise, everything else we tried to do on one hundred percent, just like we practiced. Sure, the score is low, it just means we need to work harder.”

Teammates Tiffani Zagorski and Jonathan Guerreiro impressed with their sassy free dance to “Blues for Klook” by Eddie Louis to finish fifth with a free dance score of 111.39 and total competition score of 184.37.

“Today when I was skating, I did a few little mistakes because I was not able to practice the free dance program due to the fact that I was sick,” said Zagorski. “This time, I was nervous and I’m still a little shaken from the performance, but we skated well and we’re not the last couple in the competition, so we’re happy about that.”

Americans Kaitlin Hawayek and Jean-Luc Baker rounded out the group with their soulful free dance to “Trampoline Theme” by the Irrepressibles. The team earned 112.71 points in the free dance to obtain a combined score of 184.04.

“I think every time we perform this program, it’s getting stronger and stronger,” said Hawayek. “I think being our first time at the Grand Prix Final, we were just really looking to put on a performance that we felt like we represented our deserving-ness of being here and I think we did that tonight. And I think that the scores and the levels and everything will come as the season goes on. I think we’ve proven to ourselves and proven to our federation that we’ve consistently competed well this season. On top of being here, that’s also a big statement. I think we’re both very optimistic heading into Nationals.”