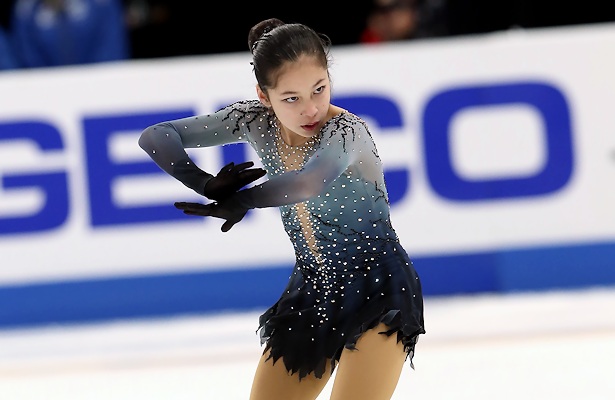 In her debut on the senior level, Alysa Liu from Oakland, Calif., became the youngest U.S. Ladies Champion in history on Friday night, edging out defending champion Bradie Tennell for the gold at the 2019 Geico U.S. National Figure Skating Championships. Mariah Bell slipped to third for her second bronze, and was followed by debutant Hanna Harrell.

Liu impressed when she landed two triple Axels in her routine, one in combination with a double toe. The only flaw in her routine was an edge call on a triple flip. Otherwise, the diminutive 13-year-old landed a total of seven solid triple jumps. She also earned level 4s on all other elements, and finished first in the free skate and overall (143.62 / 217.51). The teen also landed a triple Axel in the short, becoming the first U.S. lady to land three triple Axels in one competition.

“I did want to win like everyone else did,” said the 2018 U.S. junior champion, “and I wanted to do my best once I got here. I thought it wasn’t over when my score came out. I was happy that I beat my personal record and had a clean program.”

Due to her age, Liu is ineligible for senior international competitions, such as the World Championships, but she said she looks forward to learning from the Russian skaters once she is eligible. She also mentioned she enjoys riding her bike, playing video games, and playing tag in the park in her free time.

Bell finished second in the free skate (142.10) but still stayed in third place with a total score of 212.40. The 22-year-old fell on a triple Lutz and received an edge call on another, but was otherwise solid in her expressive routine to music from The Piano and “Experience.” She earned high grades of execution (GOE) for all other elements, as well as level 4s on her spins.

“Looking at the future, we are showing a strong field of ladies both with experience and up-and-coming,” said the 2018 Golden Spin bronze medalist. “So I think the U.S. is set. There are some obvious places that need to be better. I need to focus on the best skater and version of me I can be.”

Ting Cui, who was 12th after short program, put out a third-place free skate (139.66) which featured six clean triple jumps along with level 4 spins. The only flaw was an underrotation on the Euler of a triple flip-Euler-triple Salchow. Her final score of 194.30 boosted her up to fifth overall.

“Going into the long program tonight, I was so focused on making those landings,” said the 16-year-old. “It felt amazing, and the audience was so different from juniors. I could feel the energy from the crowd, and I was just so happy, and people were on their feet too, which was really amazing.”

Tennell left points on the table when she stepped out on the back end of a triple Lutz-triple loop and later fell on an underrotated triple Lutz that was intended to be a combination. The 2018 Internationaux de France bronze medalist showed level 4 spins and footwork with high GOEs throughout her program and earned the second highest Program Component score of the event, but her fourth-place finish (136.99) in the free skate was not enough to defend her crown. Her total score was 213.59.

“It wasn’t my best skate,” admitted the 20-year-old, who was ninth in the PyeongChang Olympics. “I am disappointed, but there is always something to be learned from things like this. I want to get home and fix mistakes I need to work on.”

“I was focused on me, and things did not go as planned, but that is life, you take away what you can,” Tennell added. “I want to go back home and work on not tripping going into my jumps. That has never happened before. I want to work on every detail and strive for perfection. It’s always important to strive to be better, and that’s my goal.”

Harrell put out a respectable and solid routine to “La Cumparsita” and “Adios Nonino” in her debut on the senior level. Her program featured six triple jumps, including a triple Lutz-triple toe which earned +4s and +5s GOEs across the board, and she finished in fourth place overall fourth place (134.95 / 203.11).

“This is my first year in seniors,” noted the 15-year-old, “and I thought it would be similar since it’s in the same arena. But to me, this was completely different. It was a great experience, but I felt nervous at first. The crowd was really supportive, and I felt confident in myself because I have been working really hard, and I just knew I could do my job. I just need to focus on myself.”

As Liu is not yet age-eligible for senior level international competitions, Tennell, Bell, and Cui were named to the Four Continents. Tennell and Bell will also be competing at the World Figure Skating Championships.