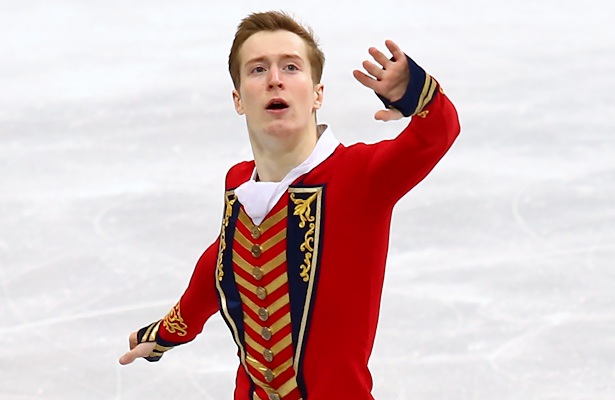 The 20-year-old put out his best performances this season so far at Europeans to win his first medal at the event with personal best scores after coming eighth in 2017 and sixth in 2018.

“I am happy with how everything turned out,” he said. “Basically, it was what we had hoped for and worked for. Not everything was perfect, so I will continue to train. There were quite a few mistakes in the short program and I lost many points.”

The Muscovite wanted to try a quad flip in the Short Program for the first time in competition, but he tripled it and stumbled.

“I don’t think that I went in vain for the quad flip,” he said. “Some people said it wasn’t worth trying it, but my coach [Svetlana Sokolovskaia] and I don’t think so. We think that we did everything the right way. When if not now, to try something new? I went for it, and at least in my head, I understood how to approach it and I’ll be ready for it at my next competition.”

Including a new element in competition for the first time is a big step for any skater.

“Each new jump in competition is a different feeling,” Samarin pointed out. “I did it in practice consistently and in the six minutes warm up, but when you compete, there are some nerves, obviously. You want to show the best attempt and that distracts a bit. At least in my head I went for it, but in the last moment I hesitated. It was an experience that will help me in the future. I’m ready for doing the quad Lutz and flip.”

Samarin has been doing the quad Lutz since the past season, but the flip is new, and the skater surprised himself with how fast he learned it.

“I did the quad flip just before New Year’s Eve,” he offered. “I made myself a present. Actually we wanted to learn another jump, but I came to my coach myself and said, ‘maybe it’s better to try this one’ and I went for it and landed it on my second attempt. I guess it’s the fastest I’ve ever learned a jump. I’ve tried different quads, but [until then] I never went for the flip. Now I have to do it in competition. The Lutz and flip will be a good claim.”

While Samarin was very pleased to have won his first senior-level ISU Championship medal, he knows how close he came to winning the title.

“I know now how close it was and where I could have taken these missing points. But all these “ifs” I think are empty talk,” the 20-year-old pointed out. “We saw my mistakes and we’ll fix them not to lose points.”

At the same time, however, he was also pleased for Fernandez, to whom he has always looked up to.

“I am a bit upset,” admitted Samarin regarding those missing points. “I was just lacking a little bit and I could have been in first place, but on the other hand it is my first medal and it is a starting point for more. Javier is a seven-time European Champion and he gave it all.”

Samarin is mostly known for his jumping ability and has often been criticized for lacking in the components department. He and coach Svetlana Sokolovskaia have taken that criticism to heart. The 2017 World Junior bronze medalist has started to work with former ice dancer Vitali Butikov to improve his skating skills, and since the fall, has been working on the floor with dancer Ramil Mekhdiev from Igor Moiseev’s famous Russian dance ensemble.

“He has a huge experience and knowledge that he tries to instill in me,” said Samarin. “Almost every day we’re working for several hours. This is hard, but I know that I need that. I lose a lot of points and now I’m trying actively to catch up.”

“I am learning something new each time,” he noted. “It is easier now, but to realize how much I can’t do what he can do [is hard]. But it pushes me forward, develops me further and makes me better. On the ice, a lot of things are easier to do, there is a kind of liberation of the body and I start to feel the music better, hearing the accents.”

It was Samarin’s coach Sokolovskaia who brought in the dancer, who used to work with the Alexei Mishin’s skaters. Mekhdiev even travelled to Minsk to support his new student.

“He was pleased, but he saw a lot of new things we still need to work on and indeed there is a lot left to improve and there is no time to relax,” Samarin noted.

Samarin himself selected the music for both his short and long program this season (“Cold Blood” by Dave Not Dave and music from The Greatest Showman soundtrack).

“There was no problem with the music choice for the long program,” Samarin said of The Greatest Showman. “I went to see the movie and realized that I want to skate to this music, because I loved the movie and the whole soundtrack is great.”

The skater felt that the short program was his style and hopes the audience is enjoying it, admitting that the lyrics are a “bit daring.”

“The text is a bit provocative indeed, but I really like that song and have fun skating to it,” he said. “I don’t emphasize the lyrics. I know the translation of the lyrics, but it’s not about that, we’re just expressing the character. I didn’t get any comments from judges about it.”

While the Muscovite is now enjoying the biggest success of his career so far, like others, he has had his shares of ups and downs. The Olympic season was a struggle. Samarin battled injuries and eventually missed out on qualifying for the Olympic Games.

“From the very beginning of last season, I had problems with my skating boots and it all accumulated and the whole season turned out to be difficult and painful,” Samarin recalled. “As it was an Olympic season, we thought we’ll make it through, but after skating at the Russian Cup Final [in February 2018], I realized that I can’t do it anymore. We started to heal my injuries and I want to say thank you to our federation. They saved me and found great experts and gave me the chance to enjoy figure skating without pain.”

The skater underwent knee surgery last May, was back on the ice in July, and started jumping again towards the end of August.

“I am glad that I finally can enjoy skating without thinking about having pain somewhere,” said the Russian bronze medalist said. “I just can enjoy my favorite thing.”

Samarin has a philosophical take on everything he has had to overcome.

“I think all these experiences and the setbacks I went through are making me stronger,” he said. “This is my path that I have to follow. There were upsetting moments, but I am not regretting that I had to go through them. It is meant to be that way and sometimes you have to fall in order to rise.”

“I am not looking into the future and what will happen next,” he summed up. “I’m trying to live in the present and what happened earlier, stays in the past, but I’m taking some notes for myself.”

The European silver medalist is now preparing for the Winter Universiade in Krasnoiarsk, Russia, in early March, which should be another stepping stone towards his debut at the ISU World Figure Skating Championships in Saitama, Japan.