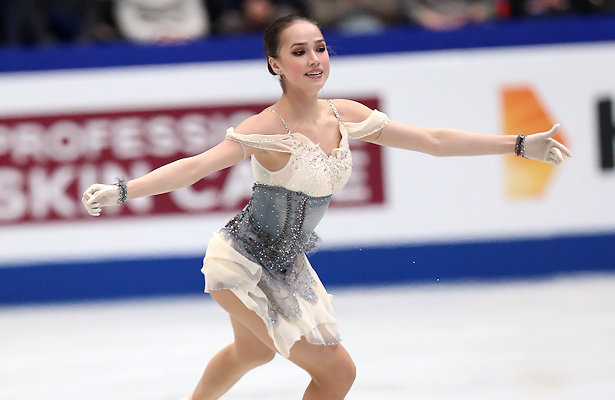 Russia’s Alina Zagitova took a comfortable lead in the Ladies’ event at the 2019 World Figure Skating Championships on Wednesday. Kaori Sakamoto is currently in second, followed closely by Elizabet Tursynbaeva of Kazakhstan.

Zagitova racked up huge grades of execution (GOE) on all elements in her elegant routine to The Phantom of the Opera. The 2018 Olympic champion landed a triple Lutz-triple loop, double Axel, and triple flip while earning level 4 on all spins and footwork for a new season’s best of 82.08.

“The audience really helped me today,” said the European silver medalist. “It was a good performance. I didn’t always skate so well in the short program this season. There were some underrotations or other little errors. Here, I skated with joy, I didn’t have to hold back. The audience was great, I love to skate here. I know there are also Russian fans here and I heard their support and it helped me. I was calm. After my score, I was happy for a moment, but now I’m focusing on the free skating.”

The 16-year-old said she was going into the Free Skate with a “fighting mood.”

Sakamoto was solid, landing a triple flip-triple toe, double Axel, and triple loop. The 2018 Skate America silver medalist also earned high GOEs and level 4 on all elements in her polished routine to “From My First Moment,” scoring a new season’s best of 76.86.

The 18-year-old was upset with her fourth place finish at 2019 Four Continents two months ago, so she trained hard for this event.

“Because of my hard training, which was harder than my training prior to Olympics last year, I gained a lot of confidence in my program, and that helped a lot,” said the Japanese champion. “I wanted to make sure to skate at my best as a result of my training. Yes, I felt some nervousness, but it was at a good level, so I was pretty satisfied with my program.”

“The triple-triple in today’s short program was exactly like how I jump during the practice,” Sakamoto added. “Given this is my first experience at Worlds and in Japan, I thought I would be much more nervous, but I didn’t. It was a good experience overall. Having the points above 75 at the short program in international competition was the first time for me, so I was very pleased with it.”

Tursynbaeva opened her delicate, but strong routine to “Moonlight Sonata” with a solid triple Lutz and followed up with double Axel and triple Salchow-triple toe. The 2019 Four Continents silver medalist was also awarded a level 4 and positive GOEs for all elements for a new season’s best of 75.96.

“I felt really good while skating,” said the 2019 Winter Universiade silver medalist. “I was doing pretty well at practices and I’m glad I could show at the competition what I have been practicing. When I was standing right before the program, I heard someone screaming and supporting me and that was really amazing.”

“I love the ice here and I love skating in Japan and it helped me reach my season’s best,” added the 19-year-old. “In the free skating, I want to skate with the same energy and I just have to be confident and calm and show the same thing as practice.”

Tursynbaeva is planning on attempting the quadruple Salchow in her free skate.

“It was going pretty well in practice this year and landing them in every practice,” she said.

Russia’s Evgenia Medvedeva underrotated the back end of a triple flip-triple toe, but was otherwise solid in her expressive short program to Tosca, landing a double Axel and triple loop. The 2018 Olympic silver medalist was awarded a level 4 and high GOEs on all elements to score 74.23 points—a new season’s best—for fourth place.

The two-time World champion was clearly not satisfied with the combination jump.

“I should have jumped it brilliantly like I did during the training session,” she said. “But I started to practice jumps with my arm up just two weeks before. As for other elements, I am pretty satisfied with them, especially, the double Axel.”

The 19-year-old is hoping she will get better scores on her free program.

“As for the support from the tribunes, I felt at home,” said Medvedeva. “I heard a lot of voices, even the Russian ones. Usually I don’t really like it when people scream out to me when I’m taking the starting pose, but this time it was funny. Tomorrow I will have a little day off. The competitions start late the day after tomorrow, so I have a plenty of time to relax and to give my body a rest. When I go back to the hotel this night, I am going to do some necessary care for me, and then sleep well till the next day’s practice.”

Eunsoo Lim of South Korea also scored a new personal best of 72.91 for fifth place after her performance to music from Somewhere In Time. The 2018 Rostelecom Cup bronze medalist landed a triple Lutz-triple toe, triple flip, and double Axel, earning a level 4 on all elements except for the footwork which was a level 3.

“I feel really happy after my perfect short program,” said the 16-year-old debutante. “I am very satisfied with my clean performance. It was a little bit weird because I didn’t feel nervous today.”

The South Korean national silver medalist has been working on being more consistent during her training prior to Worlds.

“My experience with the first World Championship is fantastic, because there is a lot of audience and I try to enjoy,” she said. “I don’t think about some ranks or scores, but I just want to have a clean free program, because this upcoming free program will be the last time to show my “Chicago” (routine) to everybody.”

USA’s Mariah Bell had a slightly wobbling landing on her triple Lutz-triple toe, but landed a solid double Axel and triple flip. The 2018 Golden Spin of Zagreb bronze medalist earned a level 4 on all elements and finished sixth with a new season’s best of 71.26.

“I am so proud of that skate!” said the 2019 U.S. bronze medalist. “Obviously this is the most important competition of the season, so you have some extra nerves, but I am so proud of how I was able to work through those nerves and still put out a strong skate.”

“I am learning more and more about myself as I go, and I am really proud of that,” added the 22-year-old. “It is incredible to skate in front of so many Japanese fans, I am so lucky to come here as often as I do. There is nothing like a Japanese crowd. I think I have done really solid programs with little mistakes, so just to be able to hold things together a little bit stronger and just kind of build off of this great moment that I had with this short program.”

Japan’s Rika Kihira finished seventh after popping an attempted triple Axel in her debut at this event. The 2019 Four Continents champion still landed a triple flip-triple toe and triple Lutz, earning level 4s on all elements, for a score of 70.90.

The 2018-19 Grand Prix Final champion claims she did not have enough speed going into the triple Axel.

“I was prepared mentally and was emotionally ready, but I lost the feeling or image of the jump in the program,” explained the Japanese silver medalist. “In the practice sessions tomorrow, I would like to make sure that I get that feeling back for my triple Axel.”

“For the free skate, I am determined to stay focused to land those two triple Axels as I have been working really hard,” the 16-year-old summed up. “It is also my goal to beat my personal best here. In the past, I used the mistake in the short program as something to bounce off of, but it is different this time since I was so determined to skate clean in the short program here at the World Championships.”

Teammate Satoko Miyahara is close behind  in eighth with 70.60 points. The defending bronze medalist underrotated the back-end of her triple Lutz-triple toe, but landed a double Axel and triple loop.

“Since I was doing very well in my practices, I feel a little bit disappointed about today’s short program,” the 2018 Skate America champion confessed. “However, it’s done, so I will forget about it and try to move on to focus on tomorrow. I was nervous today as usual, but I don’t want to be too nervous tomorrow.”

Russia’s Sofia Samodurova was clean, landing a triple flip-triple toe, triple loop, and double Axel in her program to “Nyah” from the Mission: Impossible 2 soundtrack. The 2019 European champion sits in ninth with 70.42 points.

“The scores are way lower than at the European Championships, and I was upset because of it,” admitted the 2018 Rostelecom Cup silver medalist. “I did not feel something special because I am now European Champion, I am just doing my job. I focused at showing my best. My aim for the free program is to skate clean as always.”

USA’s Bradie Tennell rounds out the top 10 with a score of 69.50. The 2018 Internationaux de France bronze medalist landed a double Axel and triple flip, but underrotated the back end of a triple Lutz-triple toe.

“I just hit on a bubble on my first jump,” the 2018 Autumn Classic and Golden Spin champion explained. “I am a little disappointed with my performance, that first jump I have been hitting it every time all week. I think everything else went pretty well. I am here to put it all out there, everything I have got. As long as I do that, I will be happy at the free.”