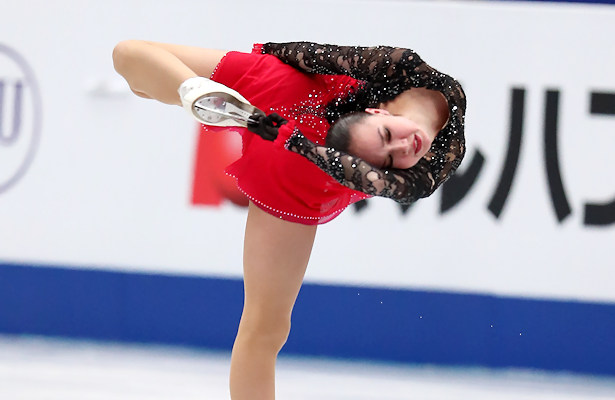 Alina Zagitova of Russia pounced on the gold medal in the Ladies’ event at the 2019 World Figure Skating Championships on Friday night in Saitama, Japan with nearly 13 points to spare. Elizabet Tursynbaeva of Kazakhstan took the silver, becoming the first lady from Kazakhstan to win a world medal, while Russia’s Evgenia Medvedeva pocketed a redeeming bronze after what had been a rough season.

Coming off a rough free skate at 2019 Europeans where she won silver, Zagitova rebounded in Saitama, attacking and landing seven triple jumps—including two triple Lutzes—in her “Carmen” routine. The 2018 Olympic Champion earned a level 4 on all spins and footwork to score 155.42 for first place finish in the free skate and overall (237.50). The 16-year-old had nearly 13 points to spare when all was said and done.

“My first thought at the very end of the performance was, ‘Yes, I did it!'” said the 2018-19 Grand Prix Final silver medalist. “Through hardships to the stars. I realized that I needed a clean skate and I went into each jump determined landing it. I was very nervous, but I think the experience from the Olympic Games helped me somehow. I felt like at the Olympics, even worse probably. I was very nervous, because this season didn’t go so smoothly.”

“I want to thank my coaches and everyone who helped me and I want to thank the spectators that came to support me,” said Zagitova. “I knew that the audience is very welcoming and supportive and that helps me to jump.”

Tursynbaeva became the first lady to land a quad Salchow in a senior international competition, which she opened with in her free skate to “Otono Porteno.” The 2019 Four Continents silver medalist stepped out of a double Axel, but that was the only error in another otherwise solid performance that featured six triple jumps and level 4 spins and footwork. She scored a new season’s best of 148.80, placing fourth in the free skate and second overall (224.76).

“I still cannot believe that I have won the silver!” said the 2019 Winter Universiade silver medalist. “To tell the truth, during the practice session I was feeling weird. I am glad that after all I managed, [I was able] to focus on my performance. I am pleased that I landed the quadruple Salchow. I will remember this championship for a long time as it is my first medal at the World championships. I managed to skate two clean programs, which is a rare thing to me.”

“This is my last competition this season,” said the 19-year-old, “and now I will have the time to work on other elements. I am planning to try different jumps as well, for example, a triple Axel, as everyone needs it now.”

Medvedeva gave a redeeming free skate after an unsatisfactory season which ended in a “there-you-go!” fist pump. The Olympic silver medalist only had one error in which she underroated a double Axel. Elsewise, she landed all seven triple jumps cleanly in her tango routine to music by Astor Piazzolla, including a a triple Lutz and triple flip-double toe-double toe. All spins and footwork were graded a level 4 and she earned a season’s best of 149.57 to finish third in the free skate and overall (223.80).

The two-time world champion said that “weakness” was the main source of energy.

“My hip really hurts now, and everyone could have noticed the tapes and the way I have spent the six minutes practice before the performance,” Medvedva explained. “This weakness made me angry and gave me the energy to skate. It hurt so much that it turned into angriness.”

“I have got many plans for the next season and a lot of elements I would like to try,” shared the 19-year-old. “As for my new free program, I am going to announce it one of these days, so keep up with the news. You will see strong and beautiful Medvedeva next season. Wait for it.”

Japan’s Rika Kihira, who stood in seventh after the short, nailed her opening triple Axel-triple toe, but fell on the next triple Axel solo attempt. The 2019 Four Continents champion went on to land five more triples in her gutsy routine to “Beautiful Storm.” The 16-year-old earned a level 4 on all elements and finished second (152.59) in the free skate and moved up to  fourth overall (223.49) in her debut at this event.

“I was anxious about this free program after missing the triple Axel in my short program and I was thinking that I just have to do it,” said the 2018-19 Grand Prix Final champion. “Although I did not land my second triple Axel and am a little bit disappointed about it. Honestly, I was not landing it as much as usual,and struggling with it during practice, so I am happy that I landed the first one and was able to rotate the second one and landed all the other jumps. This is why I was relieved and said ‘Yokatta!’ (was good) right when I finished my program.”

Japan’s Kaori Sakamoto, who stood in second after the short, finished fifth in the free skate with a new season’s best of 145.97. The 2018 Skate America silver medalist popped a triple flip in the last half of her routine to The Piano, but was otherwise solid, landing a total of six triple jumps. All spins and footwork were graded a level 4, however, her total score of 222.83 was not enough to maintain second and she slipped to fifth overall.

“Although I was in a situation where one mistake can really be fatal, I did make a mistake and I am disappointed,” admitted the Japanese champion. “I tried to do everything I could and make the best out of it because this competition would probably be my last performance this season.”

Moving forward, the 18-year-old from Kobe plans to practice harder and build more confidence so she can come back.

“I still cannot figure out why I always cannot perform a perfect program, a performance without any mistakes,” said Sakamoto. “This time, my mental state was same as always, so I think I somehow went off balance a little. At the Four Continents, I could not fully focus on myself because I thought too much about other skaters, so this time, I wanted to avoid that and I tried to remember what I did when I was performing well to improve that part. I think there would be more fierce competition next year because more junior skaters that are capable of quad jumps are coming, so I need to step it up.”

Teammate Satoko Miyahara, who stood in eighth after the short, finished sixth in the free skate (145.35) and 215.95 overall. The defending bronze medalist stepped out of the final jump on a triple flip-double toe-double loop, but that was the only major error in her fearless routine to “Invierno Porteno,,” which also featured a total of seven triple jumps.

“The short program was a disappointment for myself, so I feel I made a comeback, [although] I still had some mistakes during free program,” said the 2018 Skate America champion. “I feel I did everything I could have done for this World Championship.”

“This season was mentally one of the toughest seasons, and I feel I had more disappointing competitions over good ones, but I wanted to make sure my finale was a good one,” said the  Japanese bronze medalist. “While I don’t have any concrete ideas in my mind right not, I always like to challenge myself every year, and [want to] try something new for next year.”

USA’s Bradie Tennell immersed in herself in her “Romeo and Juliet” routine, landing seven triple jumps after a disappointing free skate at 2019 Four Continents that left her in fifth place. The 2018 Internationaux de France bronze medalist earned a season’s best of 143.97 for a seventh-place finish in the free skate and moved up from 10th to seventh overall (213.47).

“I have put definitely a lot of work in, focusing on the details and perfecting every second of the program,” said the U.S. silver medalist. “The key for tonight was just letting myself enjoy the moment, and really just breathing and taking it all in. The short program could have been better obviously, but this free skate, I am so happy with. It is what I have been striving for all season, and to do it here in Japan, in front of such an amazing crowd in this awesome arena is everything I could have hoped for.”

Russia’s Sofia Samodurova gave an entertaining and sassy routine to music from Burlesque, all seven triple jumps were cleanly executed with one arm raised overhead. The only error came when she received an singled the final jump of a planned double Axel-double toe-double loop. The 2019 European Champion scored 138.16 to finish eighth in the free skate and eighth overall (208.58) in her debut at this event.

“I feel only happiness,” said the 2018 Rostelecom Cup silver medalist. “There was a little disappointing mistake on a combination jump. I have had it three times in a row already, but now I do not pay any attention to this. I am glad that I managed to hold my spirits together. It is the last competition this season and I wanted to show my best.”

“This season I got a lot of confidence,” added the 16-year-old, who plans to learn the triple Axel. “I was skating better and better with every competition. The most important thing is that the coaches were pleased with me and smiled in the Kiss and Cry zone.”

“I have really focused on myself this week, and I am so proud to put out two solid performances at the World Championships,” said Bell. “I have just been taking it day by day, and it was no different in the program. Element by element, and then you just string together everything, and it was a really good skate today, so I am really proud at myself.”

“Next season I am definitely looking to up my technical a little bit,” said the 22-year-old. “Compared especially to the girls in the last group, I have a lower technical score for my free skate. I have a lot of room to improve in terms of technical, and that is what I am going to do when I go back home and get ready for next season.”

“I never missed triple flip, and it was at the end,” said Lim of her free skate. “So my skate was a bit weak, but I don’t know (what happened). This is my first senior Worlds and I am not satisfied with my free program because I missed my jump, but happy to compete with top skaters in the last group.”

“Despite having outside noise, I tried to focus on the competition,” added the 2018 Rostelecom Cup bronze medalist. “I don’t want to say something right now about the noise. I learned that I need to compete more and stay consistent. For next year, I will get new programs and want to skate better than this year and have consistent performances.”

Somewhat of a pall was cast in the event when reports emerged that Lim’s management company reported she had been intentionally cut by Bell’s blade during practice before the Ladies’ Short program. Social media and other news outlets were ablaze with speculations.

The incident was verbally reported by the Korean Team Leader to the the International Skating Union (ISU), but no official report had been received at the time. The ISU released a statement on Thursday in which it found no foul play and encouraged the respective figure skating associations to work it out.

“It was an unfortunate event,” said Bell. “I meant no harm. I was not following any of what was going on social media, so I don’t know what was happening in total. I was just focusing on my job.”

At press time, no other official word had come from either skater, the ISU, Korean Skating Union, or the United States Figure Skating Association.