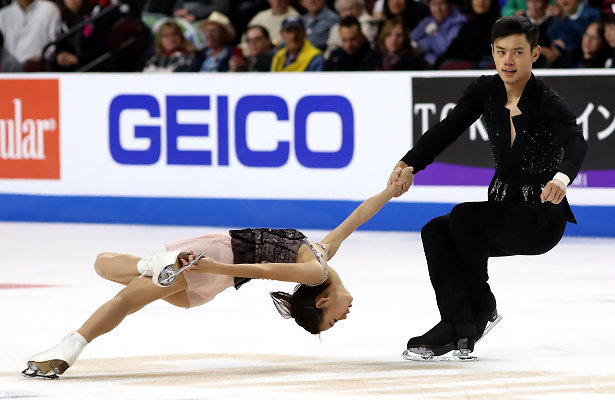 2019 Skate America is the first event of the 2019-20 Grand Prix figure skating series and kicked off with the Pairs Short Program on Friday afternoon in Las Vegas, Nevada. Cheng Peng and Yang Jin of China took first place, followed by Russia’s Daria Pavliuchenko and Denis Khodykin and USA’s Ashley Cain-Gribble and Timothy LeDuc.

In their routine  to “Alegria” by Cirque du Soleil, Peng underrotated and stepped out of the side-by-side triple toes, but the 2019 Four Continents bronze medalists were otherwise solid. Their short included a strong triple twist and throw triple loop, and the team earned a level 4 on the change combination spin, step sequence, and reverse lasso lift. The judges awarded Peng and Jin 72.72 points—three points shy of their personal best from last season’s Grand Prix Final where they took silver.

“We made a mistake on the side-by-side jump (triple toe) obviously, but the rest of the elements were quite good and we’re satisfied overall with the performance,” Jin said.

“The hardest part at the beginning of the season is to get back into competition mode,” added Peng. “It’s been half a year since the end of the last season.”

“We’ve been to the USA before, but never to a place like this,” Peng remarked. “Las Vegas is truly unique!”

Pavliuchenko and Khodykin delivered a powerful routine to “The Storm” by HAVASI, showing deep edges and good ice coverage throughout. The 2018-19 Grand Prix Finalists landed solid side-by-side triple toes, a level 4triple twist and a throw triple loop. The team also showed a nice spread-eagle exit out of a group 5 Axel lift which was also graded a level 4. They sit in a close second after earning a new season’s best of  71.25 points.

“It was a good performance for us,” said Pavliuchenko, adding that they lost two levels in the performance and noting the mistake in the step sequence. “Obviously there is always room to grow, but the free skate is still to come.”

Coming off a first-place finish at 2019 U.S. International Classic earlier this season, Cain-Gribble and LeDuc gave a near-perfect routine. With the exception of a fall on a throw triple Lutz, the U.S. National champions delivered a triple twist, side-by-side triple Salchows and earned a level 4 on the change combination spin and step sequence. Their routine to “A Storm Is Comin” by Liv Ash was awarded a score of 68.20.

“It was honestly just a small technical error,” said Cain-Gribble. “I tapped a little under, so it went up sideways, so I was under for the air position to land, so it landed on the right side. As soon as I watched the video in the kiss and cry, I knew what I needed to fix and will do that for tomorrow. There’s no issue with the throw Lutz, I’ve been doing it for four seasons now.”

“We’re really excited to be here at Skate America,” said LeDuc. “This is a special competition; this audience, it feels a lot like nationals even though it’s an international competition and we’re here to compete for Team USA. It feels very intimate because we look around and every place we look we know someone in the audience. So it is additional pressure because we want to do really well for everyone.”

Teammates Haven Denney and Brandon Frazier earned a new personal best of 65.18 and are in fourth after their program to “Atmadja” and “Reveil” by Cirque du Soleil. The 2019 U.S. silver medalists showed a strong throw triple loop, change combination spin and group 5 Axel lift, however, he turned out the landing of the side-by-side triple Salchows while she doubled hers.

“Technically we lost some points with the double, but actually it wasn’t bad,” said Frazier. “Haven and I have been tackling our own personal goals this season, and today was a right step in the right direction to achieving those. Basically what those are is going out and not letting our nerves get the best of us, not trying to be perfect. I think just in the past couple weeks, our mindset and practices have been way more solid. We feel better and I know we left points on the table, and we want to get those points. But we know we’re going to be competitive if we go out every competition shoulders back and we relax, we breathe, we focus on ourselves. Lately in the past few competitions we haven’t been doing that, been just getting way too nervous. Today we felt better.”

“I think this program had some mistakes like the jump,” said Denney. “I’m frustrated about it, but I’ll do it tomorrow. I think what we’ve been working on with our coaching team and our personal selves is just to always think about the progress and not just the perfection of our elements or the whole program; just taking more one thing at a time and emotionally and mentally we were better in this program than in Nebelhorn. So yes there were some mistakes, but I think we conquered ourselves more mentally in this program.”

USA’s Jessica Calalang and Brian Johnson are in fifth place with 55.06 points. Their routine to “Light of the Seven” by Ramin Djawidi featured a level 4 triple twist, back-inside death spiral, flying camel combination spin and group 5 reverse lift, however, she fell on the side-by-side triple Salchows and stepped out a throw triple Lutz. Johnson also had a stumble during the step sequence, however, it was still graded a level 4.

“Aside from the bobbles, I think we really stayed in character and overall, kind of let the mistakes go past us and skated,” said Calalang.

“We’re definitely gelling a lot better this year,” said Johnson. “I don’t know what happened in the footwork; that never happens. That was one of those things where I don’t worry about it because it’s one in a million. Everything else, we just have to do what we do in practice.”

Australia’s Ekaterina Alexandrovskaya and Harley Windsor had a disappointing outing and are currently in sixth place. She fell on the side-by-side trip and put a hand down on the throw triple flip. Points were chipped away due to the errors which resulted in a score of 55.06 for the team who placed ninth earlier this season at 2019 Nebelhorn Trophy.

Camille Ruest and Andrew Wolfe of Canada are currently in seventh (54.63) followed by Zoe Jones and Christopher Boyadji of Great Britain.