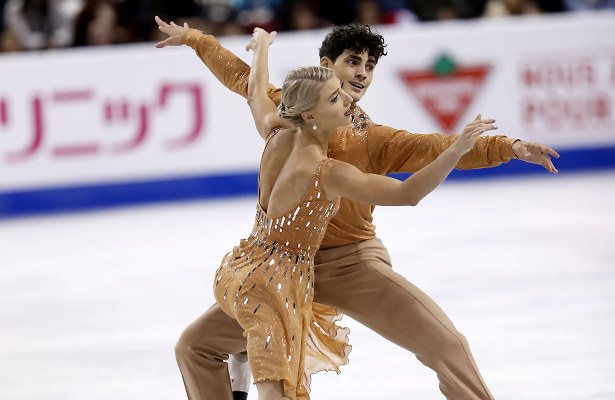 Canada’s Piper Gilles and Paul Poirier danced their way to the top of the podium at 2019 Skate Canada, winning their first Grand Prix gold medal of their career after surpassing overnight leaders and two-time U.S. Champions Madison Hubbell and Zachary Donohue. Great Britain’s Lilah Fear and Lewis Gibson rose from fourth to pocket their first Grand Prix medal—the bronze—in their fourth season together as a team.

Gilles and Poirier were near-perfect in their performance to Joni Mitchell’s “Both Sides Now”. The twizzles were graded level 4 (Gilles) and 3 (Poirier – slight bobble), and the one foot step sequence was also graded the same for both ice dancers. The 2019 Four Continents bronze medalists engaged the audience throughout, displaying level 4 lifts, combination spin, and strong level 3 diagonal steps. Both were thrilled when their scores (126.43 / 209.01) were announced in the Kiss & Cry; Gilles in particular, who jumped and screamed with joy. As she should have. They finished first in the free dance and moved up to first overall.

“We’ve worked really hard for this moment,” said Gilles. “I think we really trusted our training and knew exactly what we needed to do when we came here. We just went for it and skated today’s program and that’s all that we can do. We have plenty more to do in the next couple of weeks to keep this streak going, but I think we’re really up for the challenge.”

“It’s definitely an exciting day for us, but I think we’re really motivated and excited to go back home and start training for Rostelecom,” Poirier added.

In character, Hubbell and Donohue showed strong level 4 twizzles and lifts in their routine to music from A Star is Born. in which all elements received many positive grades of execution (GOE). The level 3 serpentine steps were very good, as were the one-foot steps in which he earned a level 4 and she a 3. All lifts were graded a level 4 and the current and two-time U.S. National champions placed second in the free dance with 123.10. With a total score of 206.31, however, they slipped to second overall.

“I felt there was so much energy in the rink,” said Hubbell. “We skated after Lilah (Fear) and Lewis (Gibson) and the crowd was absolutely crazy. We tried to feed off that and we really enjoyed another successful Skate Canada.”

Fear and Gibson entertained with their 80’s Madonna routine to “Vogue” and “Like a Prayer,” showing good level 4 twizzles, lifts, and combination spin. Fear earned a level 2 on the one-foot steps, while Gibson received a 3, and the midline steps were graded a level 2. The 2019 Autumn Classic and Shanghai Trophy silver medalists placed third (118.68) in the free dance and moved up to third overall with 195.35 points—both new personal best scores.

“For us, this is huge,” said Gibson. “We didn’t expect it. We were really happy that we had two great skates and scored very well.”

USA’s Kaitlin Hawayek and Jean-Luc Baker finished fourth (115.25) in the free dance and overall (194.77) with their cat-and-mouse Flamenco routine to Beethoven’s “Symphony No. 5” and Paganini’s “Caprice No. 24” performed by Marcin Patrzalek. The 2019 Nebelhorn Trophy silver medalists earned a level 4 on all lifts, twizzles, and the combination spin, and a level 3 on the circular steps. Hawayek was graded a level 2 on the one-foot steps, while Baker was a level 3.

Sara Hurtado and Kirill Khaliavin of Spain maintained fifth overall (180.64) while Canada’s Marjorie Lajoie and Zachary Lagha moved up one spot to sixth (177.53) despite a one-point deduction for an extended lift, earning a new personal best free dance score (107.03).

Both Russia’s Sofia Evdokimova and Egor Bazin of Russia and Haley Sales and Nikolas Wamsteeker of Canada earned a personal best in their free dance, placing ninth (167.39) and 10th (164.27) overall, respectively.