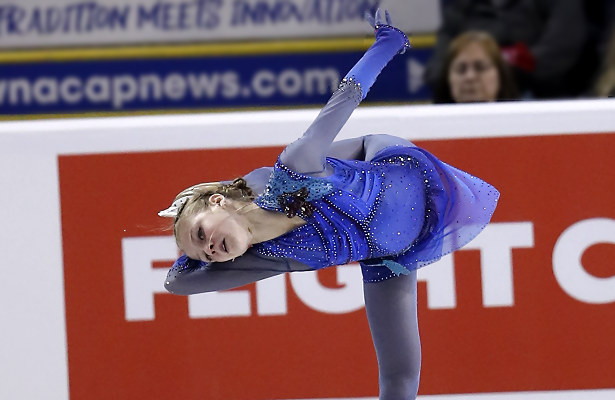 Alexandra Trusova of Russia rose from fourth to snag the gold with nearly 11 points to spare in her Grand Prix debut at 2019 Skate Canada International on Saturday afternoon in Kelowna, B.C. Japan’s Rika Kihira slipped to second, while debutante Young You of South Korea cinched the gold ahead of USA’s Bradie Tennell.

Trusova fell on her opening quad Salchow, but rallied back to land a quad Lutz followed by a quad toe-triple toe in her free skate to music from Game of Thrones. At the halfway-mark, the two-time World Junior champion then landed a quad toe-Euler-triple Salchow. In all, the young skater landed a total of five triple jumps and three quads—all solid. The 15-year-old from Moscow also earned a level 4 on two of her spins and racked up positive grades of execution (GOE) throughout to earn a new personal best of 166.62 in the free skate and 241.02 overall.

“Overall I am pleased with my performance,” said Trusova. “I am only upset that I missed the Salchow. It happens in practice quite often that I miss the first jump, but I just pull myself together and carry on.”

Performing to what she calls “International Angel of Peace”—a medley of seven pieces of music—Kihira stepped out of her opening triple Axel, but quickly recovered to land a triple Axel-double toe. In all, the 2019 Four Continents champion landed six triple jumps, including a triple flip-triple toe. She also earned many high GOEs for her level 4 footwork and displayed good spins throughout, earning 148.98 points for a second place finish in the free skate and overall (230.33).

“I made a mistake on my triple Axel and I regret that,” said the 17-year-old. “After that, I wanted to do all my other jumps, which I did, but some of my landings could have been better. My next event is the NHK Trophy and I am aiming for the Grand Prix Final.”

You impressed with her challenging routine to music to Evita soundtrack, landing seven triple jumps. The one major mistake was a fall on her opening triple Axel. While the two-time national champion received an edge call on her triple flip, she otherwise produced three level 4 spins and showed good footwork throughout. The 15-year-old who trains in Colorado Springs, Colo., earned 139.27 points for a fourth-place finish in the free skate. However, despite a total personal best score of 217.49, she slipped to third overall.

“I was disappointed with the triple Axel, but the other elements were good,” said the 15-year-old. “I am happy to have won the bronze medal at my first Grand Prix event—this is a great chance for me!”

Tennell underrotated the back end of a triple Lutz-triple toe and stepped out of a triple flip, but was otherwise steady-as-she-goes in her routine to music to Cinema Paradiso. The 21-year-old landed a solid triple Lutz-triple toe in the beginning of her routine, along with two double Axels and a triple Salchow. She also showed very good level 4 spins and footwork, racking up high GOEs along the way. Although she finished fifth (138.39) in the free skate, the 2019 Skate America silver medalist scored the third highest program component scores of the night. With a total score of 211.31, she finished fourth overall.

Russia’s Evgenia Medvedeva was rock solid in her  routine to “Memoirs of a Geisha” and looked more focused and confident than she did in the short program. In fact, she earned a new season’s best of 146.73 for a third-place finish in the free skate. Her program featured a total of six clean triple jumps along with good spins and level 4 footwork. “This Girl is on Fire” was appropriately playing in the background while she awaited her marks in the Kiss n’Cry. Her total score of 209.62 moved her up one spot to fifth overall.

Rebounding from a subpar short, Japan’s Marin Honda was all smiles during her light and playful routine to music from La La Land. Sporting a leg brace as a result of a car accident, the 2016 World Junior Champion still made some small mistakes, but managed to land  four clean triple jumps and showed two level 4 spins and footwork throughout. The 18-year-old from Kyoto earned a new season’s best of  120.06, finishing sixth in the free skate and moved up four spots to sixth overall (179.26).

Yelim Kim of South Korea underrotated several jumps and took a fall on a triple flip in her routine to “Love Story” to finish seventh overall (176.93).