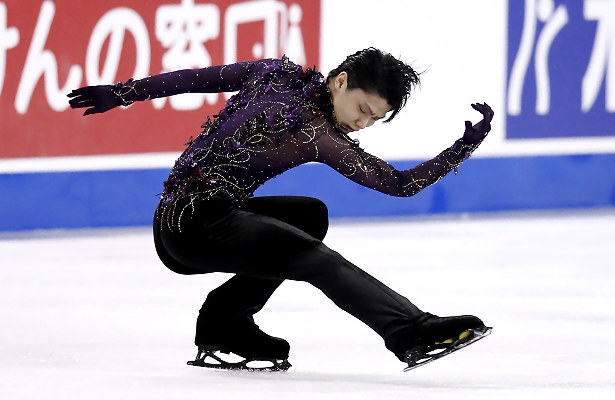 Japan’s Yuzuru Hanyu easily took the center podium to win his first Skate Canada gold with a whopping 60 points to spare in Kelowna, B.C. on Saturday night. Nam Nguyen of Canada was on fire and moved up one spot to win the silver, while Japan’s Keiji Tanaka, who was in a car accident Tuesday, jumped up two spots to third for the bronze in his first Skate Canada event.

Hanyu turned out his opening quad toe, but then effortlessly landed a quad Salchow in his powerful routine to “Origin” by Edvin Marton. The two-time Olympic Champion also landed a quad toe followed by a quad toe-Euler-triple flip. The 24-year-old also produced two solid triple Axels, both in combination, and earned a level 4 on all spins and footwork. In the end, the crowd adorned him with the traditional pooh bears while the judges awarded him a new personal best of 212.99. His overall score of 322.59 was also a personal best—a 22-point increase from worlds last year.

“In this competition I was able to win within myself,” said Hanyu. “I skated well in the short and free program which I didn’t manage before. I put a lot of pressure on myself before this competition, because I wanted to exceed 300 points and I wanted to win Skate Canada.”

On fire, Nguyen laid out an energetic and strong program to a Beatles medley which featured a quad Salchow-triple toe, quad Salchow, and six triple jumps. The only error came when he singled a toe on the back end of a triple Axel, but the two-time Canadian champion earned a level 4 on all spins and showed good level 3 steps throughout. He earned a new personal best of 178.69 for second place in the free skate, as well as a new personal best of 262.77 for second overall.

“It was a great experience overall,” said the 21-year-old. “To be able to put out that kind of performance after Yuzu’s god-like performance is a big step up in my career and I hope to continue the momentum.”

Tanaka put down a strong routine to music from Sherlock Holmes which included a quad Salchow, triple Axel-triple toe, and four more clean triple jumps. The 2019 U.S. International Classic gold medalist also landed a second quad Salchow, but singled the toeloop in combination. Nevertheless, he produced good level 4 spins throughout and earned a new personal best of 169.91 for third in the free skate and overall (250.02).

“Compared to the short program, the free skating was good,” noted Tanaka. “I was able to switch my mindset. However, my jumps were not perfect. I didn’t do the quad toe and there is room for improvement.”

USA’s Camden Pulkinen had a few errors in his “Last Emperor” routine when he underrotated his opening quad toe, stepped out of a triple loop, and triple flip, but otherwise landed a total of five clean triple jumps. The 2018-19 Junior Grand Prix finalist showed two level 4 spins and earned a new personal best of 155.73 for fourth place in the free skate. However, with a total score of 244.78—also a personal best—the 19-year-old slipped to fourth overall in his Grand Prix debut.

Deniss Vasiljevs of Latvia, who stood in fourth after the short, finished seventh (143.39) in the free skate and fifth (244.78) overall. The 20-year-old underrotated a quad Salchow and popped a triple Axel and Lutz, but showed good level 4 spins and level 3 footwork in his routine to “Lotus Feet” by Steve Vai.

Italy’s Matteo Rizzo underrotated the back end of a triple flip (edge call)-Euler-triple Salchow as well as a quad toe which was two-footed. He also stepped out of a triple Axel, but managed five clean triple jumps along with two level 4 spins. With a total score of 223.78, he moved up from ninth to sixth overall.