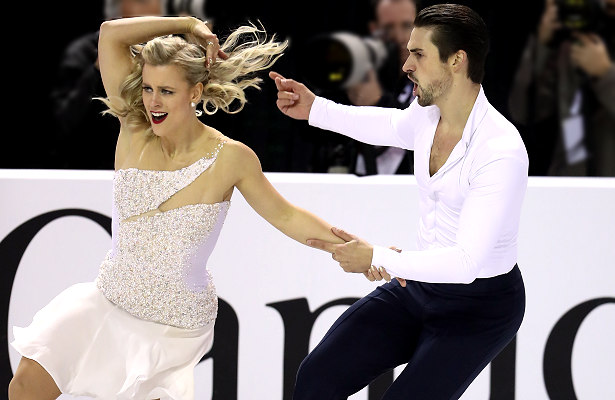 USA’s Madison Hubbell and Zachary Donohue, took the lead in Ice Dance as 2019 Skate Canada International kicked off in Kelowna, B.C., on Friday afternoon. Canada’s Piper Gilles and Paul Poirier are close behind in second, while USA’s Kaitlin Hawayek and Jean-Luc Baker sit in third.

Portraying Marilyn Monroe and her “beau,” Hubbell and Donohue put out a playful show dance which featured a very good level 3 midline step sequence with many positive grades of execution (GOE) as well as a level 4 straightline lift. Hubbell received a level 3 on her twizzles while Donohue earned a 4, and their pattern and Finn steps were graded a level 3. Fresh off a win from 2019 Skate America, the U.S. Champions are currently in first place with 83.21 points.

“We were actually pleased to end our Grand Prix (series) for the Rhythm Dance already,” Hubbell said. “We had this experience (of back-to-back Grand Prix events) last season and we kind of knew how to approach it. But, we also were able to stay with friends and really take a couple of days of full mental and physical rest in Vancouver before arriving here. We feel ready and prepared for this competition.”

“The two of us are both very proud of what we did today,” said Gilles. “We’ve trained really hard on the Short Dance (Rhythm Dance) to make a statement. Our first program on the Grand Prix series is usually a tough one, so it was nice to have the home crowd behind us. We felt their energy and we’re excited for tomorrow.”

Hawayek and Baker laid out a disco medley which was highlighted by level 4 twizzles and curve lift. The 2019 Nebelhorn Trophy silver medalists also showed good level 3 midline and Finn steps as well as level 3 pattern steps, earning positive GOE throughout. They sit in third with a new personal best of 79.52 points.

“Every time we come to Skate Canada, the crowd doesn’t disappoint us and they give us this extra boost of energy,” Hawayek noted. “We’re happy with the improvements we’ve made since our senior B events this fall and we’re looking forward to continue that in the free dance tomorrow.”

Lilah Fear and Lewis Gibson of Great Britain were strong in their theatrical Blues Brothers medley, showing level 4 twizzles and rotational lift, as well as strong level 3 Finn steps. They are fourth with a new personal best of 76.67 points.