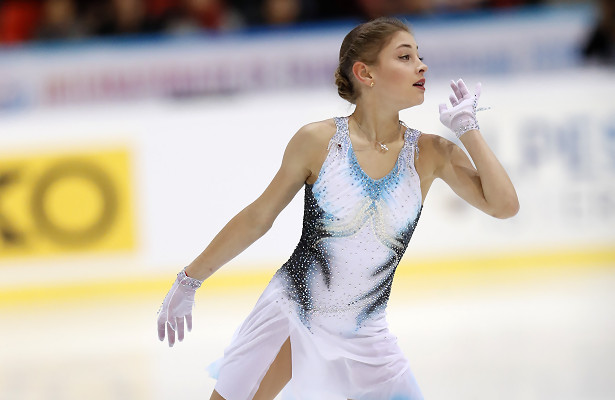 Kostornaia underrotated her opening triple Axel and received an edge call on a triple Lutz, but otherwise landed a solid triple flip-triple toe in her ethereal routine to “Departure” from The Leftovers and “November” by Max Richter. The 2018-19 Junior Grand Prix Final champion also received a level 4 for all elements along with many positive grades of execution (GOE). She scored 76.55 points, just shy of her season best at 2019 Finlandia Trophy where she won gold.

“I am pleased that I was able to show my maximum, but obviously there is something that can be fixed,” noted the 16-year-old. “Overall, it was a good start for my senior competitions.”

Zagitova also received an edge call on her triple Lutz in combination with an underrotated triple loop, however, the double Axel and triple flip were solid. Her performance to “Me Voy” by Yasmin Levy also featured strong level 4 spins and footwork, but she received a one-point time violation and scored 74.24 points for second place.

“I went out on the ice with the thought that I wanted to enjoy my performance and I think this is what I did,” said Zagitova. “Obviously, there is still some work left to do, but overall I am pleased with myself today.”

In her short to “Radar” and “Work” by Britney Spears, Bell landed a good double Axel, but also received an edge call on her triple flip in combination with a triple toe. The triple Lutz was solid, however, and the 2019 Nebelhorn Trophy gold medalist also showed good level 4 spins and footwork throughout to score 70.25 points.

“I’m really pleased with my skate today,” said the 23-year-old. “I had a lot of fun. I think there is obviously some room to improve, but I’m really proud of that skate for my opening Grand Prix of the season.”

USA’s Starr Andrews earned a new personal best of 66.59 for fourth place after her performance to “You Lost Me” by Christina Aguilera. The 2019 Egna Spring Trophy silver medalist produced a solid triple toe-triple toe, double Axel, and triple loop as well as level 4 spins and footwork.

Japan’s Wakaba Higuchi landed a double Axel but underrotated the back end of a triple Lutz-triple toe and received an edge call on the triple Flip and is in fifth with 64.78 points.

Teammate Kaori Sakamoto produced a solid triple flip-triple toe but fell on a double Axel and put a foot down on a triple loop. She sits in sixth (64.08).