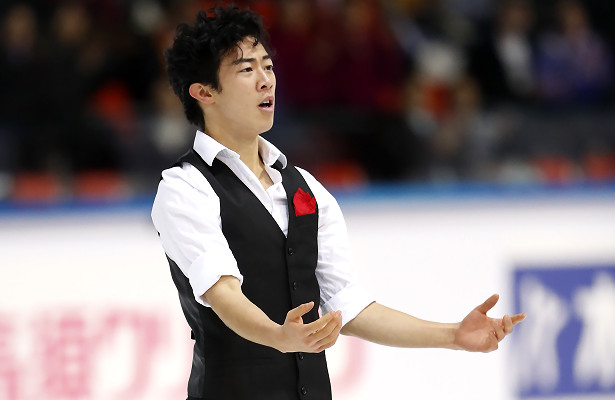 USA’s Nathan Chen took the lead in the Men’s Short Program at 2019 Internationaux de France in Grenoble on Friday afternoon, followed by Alexander Samarin of Russia and France’s Kevin Aymoz.

Chen opened his “La Boheme” routine with a quad toe-triple toe, but then stepped out and put a hand down on a triple Axel. He quickly recovered to land a quad flip and showed two level 4 spins and footwork throughout, earning many positive grades of execution (GOE) along the way. The two-time world champion earned 102.48 points and sits in first place.

“I’m happy to be in this position, however, the program was a little shaky,” said the 20-year-old. “The Axel, I obviously did a mistake, the (first) toe a little forward on the landing, but beyond that, I think it’s a good second run of the Short Program. Obviously, work has to be done, but it’s exciting to be in this position.”

Samarin reeled off a quad Lutz-triple toe and a quad flip, but the flip received an edge call in his performance to “Blues for Klook” by Eddy Louiss. The 2019 European silver medalist also stepped out of a triple Axel, but earned a level 4 on all spins and footwork to place second with a new personal best of 98.48.

“I really enjoyed performing here,” said the 2019 Shanghai Trophy silver medalist. “There were some mistakes, but overall, I am satisfied as a lot worked out as planned. The important thing for tomorrow is to keep the focus and show what I can do in training.”

Aymoz opened with a quad toe, but then two-footed and fell on a triple Lutz combination. The 2019 Autumn Classic silver medalist was solid otherwise, landing a triple Axel and displaying level 4 spins and footwork throughout his routine to “The Question of U” by Prince to score 82.50 points.

“The technical side was not here today, but I can skate this program,” said the French Champion. “I always enjoy my skate when I perform well. I am happy to be in the top three, because that was my goal. Even with the mistake I made, I am quite happy with what I did.”

Japan’s Shoma Uno sits in fourth (79.05) after taking two costly falls on a quad toe combination and triple Axel. The 2018 Olympic silver medalist did have a good quad flip and two level 4 spins, but the footwork was graded a level 2.

Morisi Kvitelashvili of Georgia landed a quad Salchow-triple toe and triple Axel, but fell on a quad toe. The 2019 Denis Ten Memorial Challenge gold medalists is currently in fifth with 78.79 points.

France’s Romain Ponsart landed a quad toe, but stepped out of triple Axel and two-footed the landing of his triple Lutz combination for sixth place (77.48).