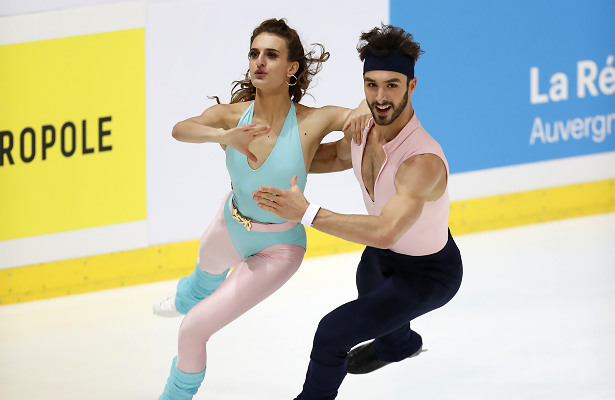 In their first appearance of the season, Gabriella Papadakis and Guillaume Cizeron of France took the lead in the Rhythm Dance at the 2019 Internationaux de France in Grenoble on Friday afternoon while scoring a new record in the process. USA’s Madison Chock and Evan Bates are currently in second, followed closely by Charlene Guignard and Marco Fabbri of Italy.

Papadakis and Cizeron, who haven’t competed since Worlds last season, took first place with a new personal best—upping their current record by .29 points—with a score of 88.69 after their theatrical disco routine to music from Fame. The 2018 Olympic silver medalists produced strong level 3 Finnsteps and midline steps, as well as level 4 twizzles and stationary lift. She received a level two for the pattern steps and he a level 3, however, all elements received many positive grades of execution (GOE) of mostly +4 and +5, across the board.

“It was a fun performance,” said Papadakis. “We were quite nervous because it was our first competition, but I think we were very lucky that it was in France. The audience was very responsive and very supportive, so it helped during the performance. We made a couple of small mistakes, so we have some things to work on for the next one.”

Chock and Bates earned a season’s best of 80.69 for their performance to “Too Darn Hot” by Cole Porter.  Their energetic show-biz routine featured a level 4 stationary lift and twizzles, while the Pattern steps were a level 3. However, the timing of the Finnsteps just didn’t go right from the start and only garnered a level 1. The diagonal steps were graded a level 2, but all elements received positive grades of execution.

“We really had our best performance of the season,” said Bates. “It’s our third time out and I felt like we’re really getting comfortable with the program and we’re able to have more energy throughout the program. It was really an amazing atmosphere in the arena today. I was delighted to see an almost full arena and the crowd went crazy.”

Guignard and Fabbri also took a season’s best with their “Paramour” routine, finishing third on the heels of the Americans with 79.65 points. The 2019 European bronze medalists were graded a level 4 on all elements with the exception of the twizzles and pattern steps in which Fabbri received a level 2 and level 3, respectively. In addition, this was the only team who met all four key points in the Finnsteps.

Olivia Smart and Adrian Diaz of Spain are currently fourth (76.09) after their entertaining “Grease” performance which featured a level 4 rotational lift and strong level 3 midline steps, however, the twizzles were graded a level 3 and the Finnsteps and patterns were a level 2.

“We’re very happy with the performance,” said Smart. “The crowd seems to enjoy our program, but there are still levels to work on. There was a level issue on our twizzles.”

Russia’s Tiffani Zagorski and Jonathan Guerreiro sit in fifth with a new season’s best of 75.05. Their routine to music from “The Greatest Showman” included good level 4 twizzles and rotational lift, as well as good step sequences—all of which were graded a level 3.

There were two instances of wrong data input of the Pattern Dance Element (Finnstep) which had been detected in due time by the Referee. The correction of the data resulted in a new score for teams Marie‐Jade Lauriault/Romain Le Gac (FRA) to 63.42 points and Allison Reed/SauliusAmbruvelicius (LTU)to 60.99 points. The ranking of the Rhythm Dance did not change.