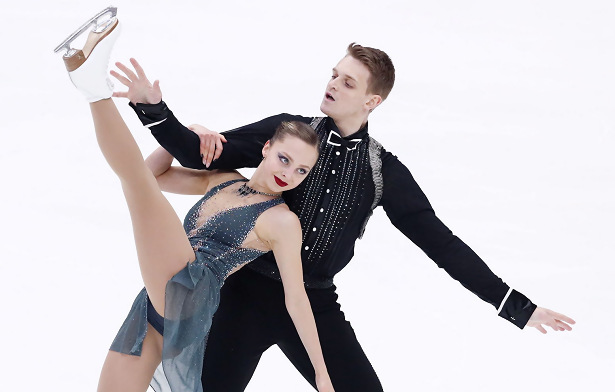 Boikova and Kozlovskii skated to “The Writing on the Wall” from the James Bond move Spectre, landing solid side-by-side triple Salchows and triple toe-double toe-double toes right out the gate. The 2019 European bronze medalists also produced an excellent level 4 triple twist and earned a level 4 on all three lifts. The team from St. Petersburg racked up more positive grades of execution (GOE) with their flawless throw triple flip and throw triple loop, earning a new personal best of 149.34 for first place in the free skate and overall (229.48).

“We are very glad to get to our first senior-level Grand Prix Final,” said Kozlovskii. “We had tough competitors in our events, but we did not set the task to beat someone. In the training process, we’re just competing with ourselves and in competition. The judges give the scores and we cannot influence that. The only thing that depends on us it to skate clean programs.”

“We’re very happy we made it to the senior Grand Prix Final for the first time in our career,” he added Kozlovskii. “We didn’t have easy competitors, so it’s nice we made it.”

When asked about their programs, Kozlovskii said the short program was “something abstract; everybody has their own vision of it.”

“The free skate is James Bond and it’s a great story,” he said. “It starts with a fight, but in the end, they get together. Hopefully our performance will be as great as the James Bond movies.”

Teammates Tarasova and Morozov opened with an effortless level 4 triple twist, but the side-by-side triple Salchows were downgraded to a double and the  and the last jump on the triple toe-double toe-double toe was underrotated. However, the throw triple loop and throw triple Salchow were good as were the level 4 lifts and pair combination spin in their routine to “Te Amo” by Umberto Tozzi. The 2019 World silver medalists earned 139.96 for a second-place finish in the free skate and overall (216.77).

“The path of improving our programs is very big,” said Morozov. “Every day we work on something new, adding emotions. It wasn’t bad, but there’s still a room to improve. No reason for us to get upset. We have a plan and we will move on.”

“I hope that people see our skating has changed,” said Tarasova when asked how working with ice dance coach Marina Zueva has helped them. “We’re putting more skating skills and transitions into our our skating, and Marina really helps us.”

“The training process is different,” add her partner. “The rink is only open for professional skaters during the first half of the day. We start at 8:15 a.m.and skate until 3:00 p.m.”

Hase and Seegert finished fourth in the free skate with 118.42 points, and with a total personal best score of 186.16, rose to third overall. Their routine to “House of the Rising Sun” featured side-by-side triple toe-double toes, but Hase fell on the side-by-side triple Salchows. She also two-footed the landing of a throw triple loop, but the team landed a throw triple Salchow and showed two level 4 lifts and pair combination spin.

“We’re very happy with this result obviously and we want to keep building on that,” said Seegert. “This is our biggest moment so far in our career. Coming here, we did not expect this result. We really wanted to go for just two good programs. The short program was flawless. In the long, we had like one major and one minor mistake.”

Miriam Ziegler and Severin Kiefer of Austria finished third in the free skate (120.18) and moved up to fourth overall (182.02). Their free skate was highlighted by solid side-by-side triple Salchows and a throw triple Salchow, as well as two level 4 lifts.