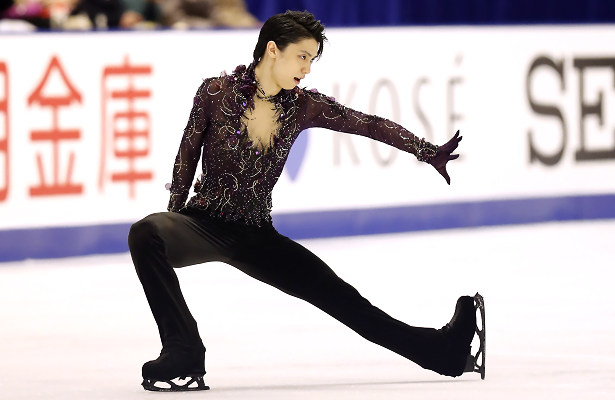 In his sixth appearance at this event, two-time Olympic champion Yuzuru Hanyu of Japan took his fourth NHK Trophy title with just over 55 points to spare on Saturday. France’s Kevin Aymoz maintained second overall to win the silver, his second Grand Prix (GP) medal of the season, while Canada’s Roman Sadovsky rose from fourth to capture the bronze—his first GP medal.

Hanyu laid out four quads—a loop, two toes, and Salchow—in his routine to “Origin” by Edvin Marton. The only mistakes came when he doubled a planned quad (meant to be a in combination with a Euler-triple flip) and then underrotated the back end of his final quad toe-triple toe which was originally meant to be a triple Axel-triple toe. The quick-thinking skater still showed a triple Axel-Euler-triple Salchow and produced level 4 spins and footwork to finish first in the free skate with 195.71 points.

“My goal is going to be a clean performance with no mistakes,” said the 2019 World silver medalist. “I am still trying to figure out what to put into the program. I want to be in a state where I can be confident no matter what my competition brings. I really appreciate all of the dedication from all of the fans, and what I would like to take from this competition is that energy, and I would like to leverage that at the Final.”

“Regardless of what type of form I am in, I want to do a clean performance,” said the 24-year-old. “It’s not possible to always be flawless, but that is what I practice. If something happens with my quad toe loop, I try to recover that and try to put something in the wall and barrier.”

The student of Brian Orser admitted to being very anxious during the morning practice.

“I was not worried about the jumps, but I wanted to finish without being injured, and I was worried about that,” he explained. “After I finished that practice, I had reassurance and did not have to change anything mentally.”

“To do two Grand Prixs then go to the Final, it is a work of condition,” Hanyu summed up. “When you are doing jumps, there is always the risk of injury. I’ve been to Sochi and been to the podium with Javier (Fernandez) and Patrick (Chan), and when I am with other (new) skaters, figure skating is changing and it makes me happy. Because I’ve had a long career myself, it’s really exciting for me to compete with other skaters.”

Aymoz underrotated his opening quad toe and then stepped out of triple toe in his routine to “Lighthouse” by Patrick Watson. The skater also put a hand down on a triple Axel and turned out the landing of a triple flip, but produced a solid triple Axel-triple toe and showed excellent level 4 spins and footwork which received very high grades of execution (GOE). The 2019 Internationaux de France bronze medalist finished third in the free skate (158.55), but with a total score of 250.02, was able to maintain second overall to win the silver and qualify for the GP Final.

“I am just happy!” said the 22-year-old. “Today was hard for me to fight, but I did the best I could tonight. I am just happy to be there on skates. It’s going to be my first Grand Prix Final. It wasn’t my goal for the season, so I am just going to take the experience from this. My coach Silvia Fontana did her Olympic performance on that rink (Torino), so there will be a lot of emotion for me at this Grand Prix Final.”

“It’s unbelievable, because Yuzuru is the true champion of the generation,” the French champion added. “When I was young, in 2012, I went to the World Championships in France to see and I remember his skating. I hope one day I will have the power when I step on the ice to give to everyone.”

Sadovsky impressed with his free skate to Schindler’s List, delivering a solid quad Salchow, followed by a triple flip and triple Axel-double toe. The 20-year-old from Ontario also landed a quad Salchow-Euler-triple Salchow, but the last jump was underrotated. The only other mistakes were a turn out on a triple Axel and a step out and hand down on a triple Lutz. Overall, the skater scored a new personal best of 168.99 for second place in the free skate. With a total score of 247.50, he rose from fourth to third overall.

“I’m still new to the senior Grand Prix circuit,” acknowledged the 2019 Finlandia Trophy bronze medalist, “and there are some mistakes that need to be fixed. I hope this success on the senior Grand Prix will not be my last. I think Yuzuru is a skating God. I think it’s really good we have Yuzuru in the sport, because he’s pushing the limits. He’s always adding more quads in his program and the program does not suffer. For me to skate with someone like that is amazing. I hope this is not the last time I can be next to Yuzuru.”

Russia’s Sergei Voronov, who stood in third after the short, finished sixth in the free skate and fourth overall (239.05). The 32-year-old landed a quad toe-triple toe, but popped one of his triple Axels and doubled a triple Lutz.

Sota Yamamoto of Japan finished fifth in the free skate and sixth overall (226.27), followed by Russia’s Makar Ignatov of Russia (222.45).