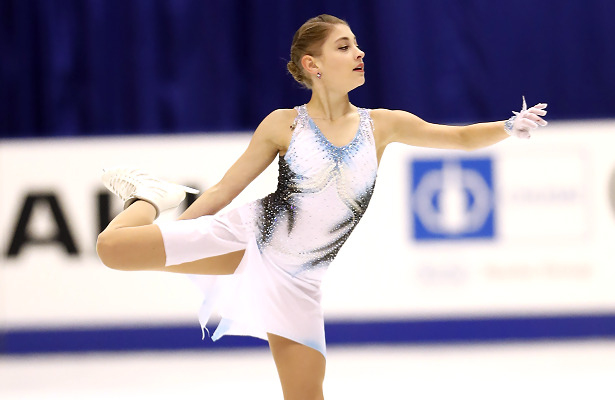 “Today’s program was a very good program because I was able to land my jumps and get a high score,” said the 16-year-old. “I am gaining opportunities because of my triple Axels. The quad jumps are banned (for ladies) in the short program, so I need to rely on my triples.”

Kihira also landed a smooth triple Axel and triple flip-triple toe, but fought for the landing of a triple loop. The 2019 Four Continents champion also showed very good level 4 spins and footwork while earning positive GOEs in her “Breakfast in Baghdad” routine, and was awarded a score of 79.89.

“I was able to land all jumps and achieve all points,” said the 2019 Skate Canada silver medalist, who admitted to being anxious after seeing Kostornaia’s score. “For the triple loop, it was a questionable mistake that I made, but it led to a good program. I will go through all my jumps in the practice tomorrow so I am able to skate with confidence.”

“I believe that today’s triple Axel was one of the best I’ve done, even in comparison to practices on the way here,” the skater from Nishinomiya noted. “I believe that in terms of the height of the jump and the width, it was higher than usual. I will evaluate it for tomorrow’s performance.  I also want to make sure I can jump all of my jumps in a clean fashion so I can be at the world’s best.”

The 2018-19 Japanese silver medalist is still deciding if she will put the quad Salchow in her Free Skate.

Chen delivered a clean routine to “You Say” by Lauren Daigle which featured a triple Lutz-triple toe, double Axel, and triple loop. The 20-year-old from New York also showed good level 4 spins and level 3 footwork to score a new personal best of 67.21.

“I put out a really solid performance, and I’m really happy with my scores and am looking forward to competing tomorrow,” said the 2018 U.S. bronze medalist.

2018 Olympic champion Alina Zagitova is currently in fourth (66.84) after popping the back-end of a triple flip-triple loop. The opening triple Lutz wasn’t perfect, but the double Axel was solid and she earned a level 4 on all spins and footwork.

Japan’s Mako Yamashita is in fifth (65.70) after her routine to “Una voce poco fa” from The Barber of Seville. The 2018 World Junior bronze medalist landed a triple Lutz-triple toe, double Axel, and triple loop, and all spins were graded a level 4 while the footwork was a level 3.

South Korea’s Eunsoo Lim took a fall on an triple Lutz-triple toe, both of which were underrotated, however, the triple flip and double Axel were clean. She is in sixth (65.28), followed by Russia’s Sofia Samodurova (63.85) and Japan’s Yuhana Yokoi (62.67).