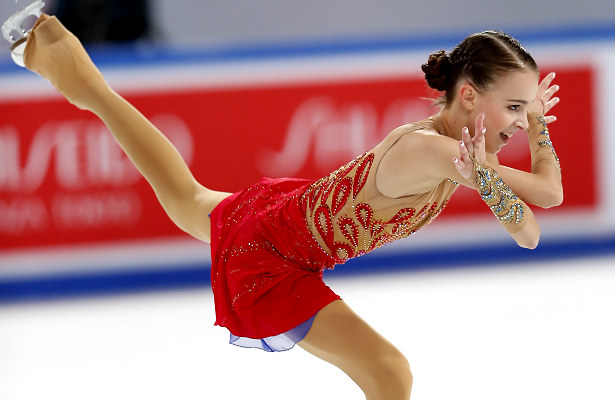 Anna Shcherbakova of Russia performs her Free Skate at 2019 Cup of China.

Russia’s Anna Shcherbakova won her second consecutive Grand Prix gold in the Ladies event at 2019 Cup of China on Saturday in her season debut on the circuit. Satoko Miyahara of Japan maintained second overall for the silver, while Elizaveta Tuktamysheva of Russia rose from fourth to claim the bronze.

Shcherbakova landed two quad Lutzes, however, the first (in combination with a triple toe) was underrotated. Unfortunately all Lutzes, including two triples, received an edge call. Nevertheless, the 2019 World Junior silver medalist showed a strong triple flip-Euler-triple Salchow and two spins were graded a level 4 in her technically-packed free skate to selections from The Perfume. The 15-year-old placed first (152.53) in the free skate and overall (226.04).

“The free program was good, but not perfect…there were some mistakes,” the 2019 Skate America champion commented. “I am very happy that I can go to the Grand Prix Final, that was my goal. I don’t know yet what my (program) content will be, but my goal will be as always, to skate clean.”

Tuktamysheva finished second in the free skate with 143.53. The 2019 Skate America bronze medalist stepped out of a triple Lutz and had a tight landing on a triple flip, but landed a two triple Axels, one in combination with a double toe, as well as a triple Lutz-double Axel sequence. With a total score of 209.10, the 22-year-old rose from fourth to third overall.

“I feel much better today than yesterday and I’m happy with my skate,” said the 2019 Lombardia Trophy and Finlandia Trophy silver medalist. “I have only a small chance to go to the Grand Prix Final and maybe I will go to the Challenger event in Zagreb. I’ll try to skate well and prepare for the National Championships.”

Miyahara underrotated a triple flip, triple Lutz, and triple toe in her passionate routine to Schindler’s List, but landed four clean triples and earned level 4 on her spins and footwork to finish third in the free skate (142.27). With a total score of 211.18, the 2019 U.S. International Classic champion was able to hang on to second overall.

“Today I felt my body very good, better than yesterday,” said the 21-year-old, “but I was still trying too hard at the end of the program. My next Grand Prix is in Russia next week. This is the first time for me to do two Grand Prix in a row and I am excited about that, but also need to take care of my body.”

Young You of South Korea also underrotated several jumps and fell on a triple Axel, but four triples were clean, including two Lutzes. The 2019 Skate Canada bronze medalist also received a level 4 on two spins and footwork, earning 130.32 for fourth place after her performance to Evita. The 15-year-old rose three spots from seventh to fourth overall (191.81).

USA’s Amber Glenn was also docked for underrotations on three triple jumps, including a flip, and popped a Lutz. The 2019 U.S. Classic bronze medalist placed sixth (110.66) in the free skate and overall (178.35).