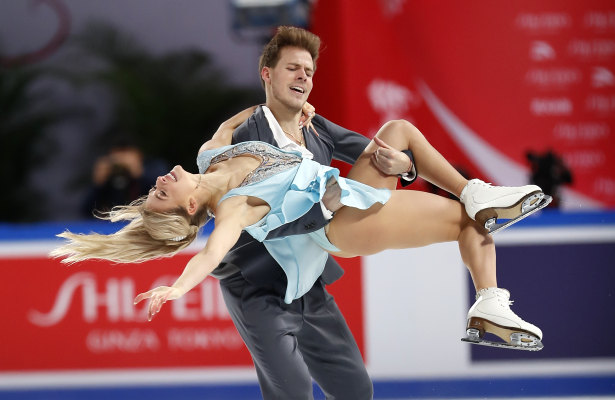 Victoria Sinitsina and Nikita Katsalapov of Russia took a comfortable lead after the Rhythm Dance at 2019 Cup of China on Friday afternoon in Chongqing. USA’s Madison Chock and Evan Bates are currently second followed by Canada’s Laurence Fournier-Beaudry and Nikolaj Sorensen.

Sinitsina and Katsalapov put out a technically difficult routine to “Singin’ In the Rain,” which featured level 4 twizzles for both skaters. The rotational lift was also a level 4 and they were awarded with many +4 positive grades of execution (GOE) for both elements across the board. The midline, Finnstep, and pattern steps were all graded a level 3 and the 2019 World silver medalists earned a new personal best of 85.39.

“We were missing competitions a lot,” noted Katsalapov. “We had a quite big break, almost a month, and we’ve worked very hard and trained every day and we couldn’t wait to come here and show what we’ve worked on.”

“We performed our program very well, the best so far I’d say, in our competitions,” Chock offered. “There are some technical things that we need to go back and check on when we get home.”

“It is our first time at Cup of China and it was very nice to break the ice with the short dance we love to do,” said Fournier Beaudry.

“It was our first Grand Prix medal at Skate America and we were extremely excited,” responded Fournier-Beaudry regarding the event. “I think it really opened some doors, some new possibilities for us and brought us more together.”

China’s Wang Shiyue and Liu Xinyu put out an entertaining “Chaplin” routine which featured level 4 twizzles from both ice dancers as well as a level 4 rotational lift. The Finnsteps and diagonal steps were graded a level 3 and she earned a level 3 on the pattern steps and he a level 2. The 2019 Finlandia Trophy silver medalists are currently fourth with 74.77 points.

Kaitlin Hawayek and Jean-Luc Baker of Canada are close behind in fifth with 74.70 points after their fun and engaging disco routine to from the Bee Gees.