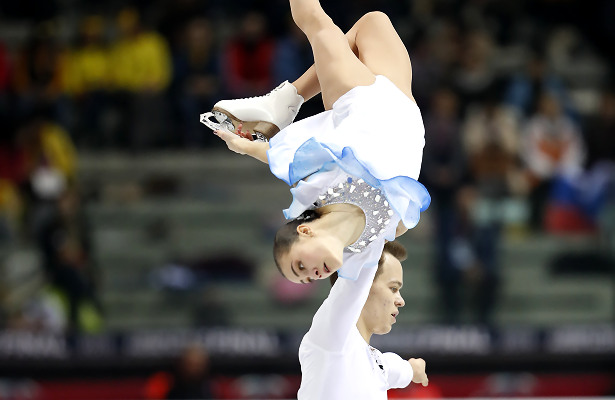 Apollinariia Panfilova and Dmitry Rylov of Russia perform their Free Skate at the 2019-20 Junior Grand Prix Final of Figure Skating.

Apollinariia Panfilova and Dmitry Rylov led a Russian sweep of the junior Pairs in Torino, Italy, on Saturday. Of six the teams, all were from Russia but one. Diana Mukhametzianova and Ilya Mironov rose from third to claim the silver, while Kseniia Akhanteva and Valerii Kolesov sipped to third for the bronze.

Panfilova and Rylov were strong in their routine to “No One Ever Called Me That,” which featured side-by-side triple Lutz-double toe-double toes and triple flips. The 2019 World Junior silver medalists also produced a throw triple flip and throw triple Salchow, as well as good lifts, however, Panfilova went down on a throw triple loop. The defending bronze medalists earned 116.43 for second place in the free skate, and with a total score of 185.23, they maintained their overnight lead to win the title.

“After our skate, to be honest, I thought we would be on the podium, but I did not expect we would be first,” said Panfilova. “Luckily, we had a good point margin from the short program and our component score, but I wasn’t happy. I am a perfectionist and I always want one hundred percent, but we couldn’t manage to do that today.”

Mukhametzianova and Mironov gave an amazing performance to “Endgame” from Chess that included a triple Lutz-double toe-double toe, a triple flip, throw triple flip and Salchow as well as a level-four reverse lasso lift. The team from Moscow earned a new personal best score of 119.47 points to win the free skate, and with a total score of 184.37, pulled up to second overall.

“It’s our best performance by points so far, but not the best by the quality for sure,” said Mironov. “We are going to work on our skating skills and the quality of pair elements like height and clean landings, because without these things, our programs don’t look complete in our opinion. Here, we were really impressed with the atmosphere of the event, with public support, it was really cool.”

“I’m satisfied that I managed to land the jumps and throw, because I couldn’t do it in practice,” added Mukhametzianova.

Akhanteva and Kolesov finished fourth (113.04) in the free skate but hung on to third overall (179.68). The team from St. Petersburg showed a good triple twist, but she stepped out of the throw triple toe and the triple Salchow-Euler-double Salchows were underrotated. Both lifts received a level 4, as did the pair combination spin, in their routine to “Shine On You Crazy Diamond” by Pink Floyd.

“The jumps did not work and there were also some errors on other elements,” noted Akhanteva.

“We showed like sixty percent of what we can do,” said Kolesov. “We basically lost two elements. Obviously, it is nice to be on the podium. It is our own fault that we didn’t do better.”

Iulia Artemeva and Mikhail Nazarychev finished third (114.67) in the free skate and rose from fifth to fourth overall (178.56). Skating to selections by Queen, the team from Perm landed triple toes and showed very good lifts and spins, but she stepped out a throw triple loop.

“This is our first time in the Final and we are very happy to have got here and to have done almost exactly what we planned,” said Nazarychev. “We had a small mistake on the first throw (triple loop) but on the second throw (double flip), we only ever planned to do a double because we wanted to maximize our score and do it as well and as clean as possible. We will look at making it more difficult when we get home.”

Alina Pepeleva and Roman Pleshkov placed fifth (107.86) in their free skate to “Romeo and Juliet” and overall (172.53). The 2019 CS Warsaw Cup silver medalists executed a very good throw triple Salchow, but the throw triple flip was two-footed. She also singled an Axel, but the death spiral was very good and was awarded a level 4 with many positive grades of execution (GOE).

“We have mixed feelings,” said Pleshkov. “On the one hand, we’re satisfied with our pair elements, and on the other hand, we’re not satisfied with the jumps. As for our short program, we have worked on mistakes. We had good practices and 6-minutes warm-up. But just before the free skate, we felt nervous. In general, we are pleased with our points and levels except for the jumps where we lost about 11-12 points. But it’s a good lesson and by the next competition, Russian Nationals, we will be more confident and more experienced. We hope to show our best there.”

Germany’s Annika Hocke and Robert Kunkel, the new team from Berlin, rounded out the top six (159.22). She took a fall on a throw triple flip, but the triple Salchows and throw triple loop were clean.

“I think both of us are positive about our performance,” said Hocke. “We’ve haven’t been together long, like half a year, so I think even being able to qualify is already something.”