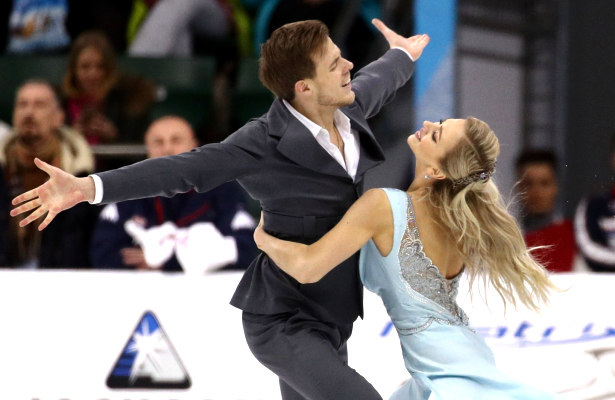 Victoria Sinitsina and Nikita Katsalapov edged Alexandra Stepanova and Ivan Bukin by a just over one point for the lead in the Rhythm Dance at the Russian National Championships in Krasnoyarsk on Thursday. Tiffani Zagorski and Jonathan Guerreiro are currently standing in third place.

Sinitsina and Katsalapov delivered a confident performance of their playful “Singin’ in the Rain” routine, except for a slight loss of balance by Katsalapov in the twizzles. The 2019 World silver medalists earned a level four and three for the twizzles, a level four for the midline step sequence and the Finnstep Pattern sequence, as well as for the rotational lift to score 88.48 points.

“I had an error on the twizzle, I got a level three for it,” noted Katsalapov. “Actually, when we finished the performance I had mixed feelings. I wanted more, especially at training, and I tried to pull myself together so that everything is well balanced. We watched our performance on video and it looked quite lively. If not for the mistake on the twizzle, even the elements were well done, with quality. So we improved in something, but I have to be even calmer going into the element that I have a special fight with (the twizzles). We can do better.”

Sinitsina agreed: “We could have done better, skated cleaner, maybe more energetic. Nevertheless, we’re happy with how we skated.”

Stepanova and Bukin were passionate and powerful in their Rhythm Dance to music from Moulin Rouge, collecting a level four for the twizzles, Finnstep Pattern and curve lift. The midline steps and the pattern dance type step sequence garnered a level three. The 2019 European silver medalists earned 87.13 points.

“When we went off the ice, the coaches were satisfied,” said Stepanova. “The performance was good, but not our best. There was not much time after the Grand Prix Final. We switched the mindset quickly, left all negative emotions behind ourselves. We took only the things we needed to work on and tried to fix the technical mistakes we made.”

Zagorski and Guerreiro’s dance to The Greatest Showman featured level-four twizzles and a level-four rotational lift. The pattern dance type step sequence was rated a level four for her and a level three for him. The team from Moscow picked up 77.38 points.

“We really wanted to be emotional, bright and really go for it and I think we pretty much stuck to that and we’re happy with our performance,” Zagorski shared. “It probably was the best performance of the season so far, but we still know we can do better.”

“We worked on some aspects after (the Grand Prix in) Grenoble and I think we did quite a good job,” Guerreiro added. “I think we’re just taking it step by step (in the free dance), and have a calm practice. Hopefully, we can put out a good performance and put ourselves in a good place before New Year.”