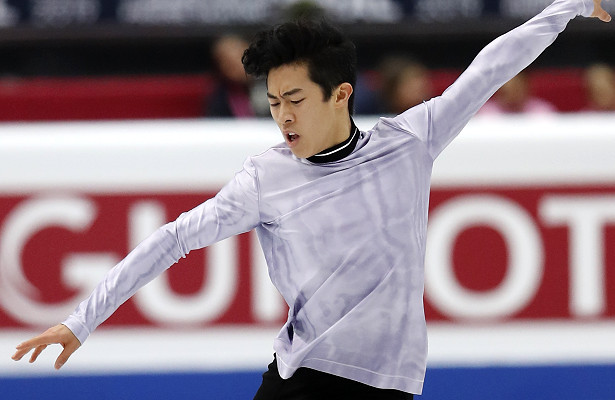 Chen was rock solid in his routine to “La Boheme,” landing a quad Lutz and triple Axel right out the gate. The 2019 World champion also landed a quad toe-triple toe in the second half of his program for beaucoup points, while racking up high grades of execution (GOE) on his level 4 spins and footwork to score a new personal best of 110.38. This score is just shy of the record score Hanyu set last year at Rostelecom Cup (110.53).

The three-time U.S. champion is not certain what the free program will feature.

“I’ve got two days to adjust and have to think. I’m not sure what the jump program will look like, but I love the program and I’m looking forward to it.”

Chen, who attends Yale University, has been trying to balance and maintain the work he is doing with coach Rafael Arutyunyan, but admits that he doesn’t see him much.

“Since I’ve been at school, I don’t have a coach’s eyes on me, so hopefully I’m maintaining the standard,” he remarked.

Hanyu’s only error was a step out on the quad toe combination in his otherwordly routine to “Otonal” by Raul di Blasio. The two-time Olympic champion landed a solid quad Salchow and triple Axel and showed superior level 4 footwork as well as strong level 4 spins. He scored 97.43 points and was not happy about it.

“I’m not satisfied with my performance today,” said the skater who turns 25 on Saturday. “This program was performed by Johnny Weir here and he got second place (in the Short Program) at the (2006) Olympic Games,” noted Hanyu. “I wanted a good performance as well. Also, the point gap between me and Nathan is a little big, so it will be hard to come back, but I just want to think about what to do in the free skate and take one step at a time and give a good performance.”

“I’m very happy to be here and it feels the same alone compared to having my coaches here,” said the highly decorated skater when asked about awaiting his scores alone in the Kiss and Cry. “Brian (Orser) is very busy with other competitions and skaters, and Ghislain (Briand) has some problem so he’s late, but I hope he will be here for the free skate. It was my first time by myself, but it feels pretty much the same.”

When Aymoz first took the ice, the wrong music began to play, and he stood center ice while it was sorted.

“I was so confident when I went out, but then when the music did not play, I felt so lonely standing there on the ice like I was the only one in the world,” he shared. “But when the music did start, I forgot totally and it was just a pleasure to share. It’s the job of the skater to stay focused whatever and I thought ‘that’s my moment.'”

The French champion gave a solid performance to “The Question Of U” by Prince, landing a quad toe, triple Lutz-triple toe and triple Axel. All elements, including his level 4 footwork and spins, received positive GOEs and the French champion earned a new personal best score of 96.71 points.

“The Grand Prix Final was not my goal for this season and so I was not stressed,” said the skater who finished fourth at Europeans last year. “I was just happy to be here and I just had fun.”

Dmitri Aliev of Russia sits in fourth with 88.78 points after his performance to “Je Dors Sur Des Roses.” The 2018 European silver medalist underrotated the first jump of his quad Lutz -double toe (meant to be a triple), but delivered a quad toe and triple Axel.

“I got a little bit tired near the end of the program, but I was not dying or losing all my efforts,” said the 20-year-old from St. Petersburg. “I was feeling good. The beginning of the program was good, but I made a mistake in the jump combination. In general, I’m satisfied that I fought for every element, despite the fact that it was hard, mentally. This event is important for me. I was at two Junior Finals and I know what this competition is like, so I want to present myself well here.”

Teammate Alexander Samarin stepped out of and put a hand down on the landing of his opening quad Lutz, and then underrotated and turned out the first half of a quad flip-double toe. The Russian bronze medalist managed a triple Axel, but the mistakes were costly and he sits in fifth with 81.32 points.

“The skate was very bad,” admitted the 2019 European silver medalist. “I don’t want to make any excuses. We won’t make the program easier. We’ll keep working with this layout, trying to skate it clean. It was an unsuccessful day, but we have a day’s break now and the free program is still to come. I will just rest (on the off day), maybe go for a walk, so that I can go into the free program calm and focused.”

Boyang Jin of China is in sixth place (80.67). The 2019 Four Continents silver medalist underrotated and two-footed the landing of a triple Lutz, but hung onto a quad toe-triple toe and landed a solid triple Axel.

“As for the quad Lutz, I popped it in previous competitions because I wasn’t focused enough,” admitted the five-time Chinese champion. “This time, I think I might have gone into the quad with too much force, but not on the right point. Then I decided to go for the quad toe-triple toe. The triple toe wasn’t perfect, but I decided to give it a try.”

“I was the last one to qualify for the Final, so I just wanted to enjoy the competition here,” added Jin, “but I do hope to use tomorrow as an opportunity to adjust and skate to my best in the free program. My coach thought that I would be able to qualify, so I held a little hope and was trying to adjust myself to prepare for this. But at the same time, I didn’t adjust that well after the Cup of China. I haven’t skated much to the music, but I did keep practicing the jumps, quad Lutz for example, in my training. I think I skated quite tight today. “