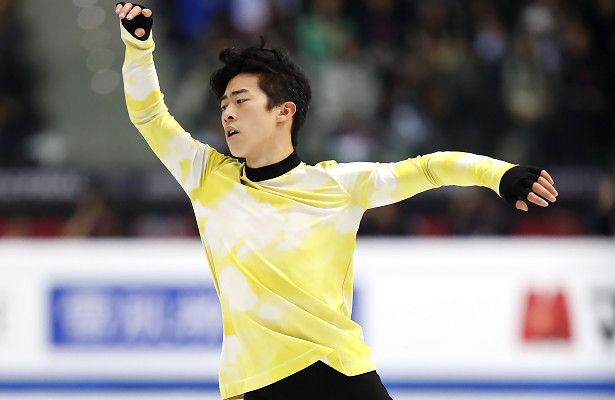 USA’s Nathan Chen maintained his overnight lead to defend his title with more than 43 points to spare on Saturday in Torino, Italy. Japan’s Yuzuru Hanyu finished second, followed by Kevin Aymoz of France, who is making is Final debut.

Chen gave both an incredible and historical performance with his “Rocket Man” routine, landing a total of five solid quad jumps—all of which earned many positive grades of execution (GOE). The two-time World Champion also showed strong spins and footwork to earn a new personal best and record score of 224.92. His total score overall was 335.30—also a new record.

“It felt amazing,” said the U.S. champion. “I got pretty gassed at the end of my program, so I guess I need to work on my stamina a little bit, but overall, I’m really happy to be here. I’m really thrilled with the score. It’s awesome experience and exposure for me to be able to compete against these amazing guys, and every time it’s a lot of fun for me, so I’m happy to be here and excited to keep moving forward.”

“Every time I compete, there’s always things I can improve on,” Chen responded when asked the question. “I haven’t yet felt after a program that I was as great as I possibly could have been. There’s little bits I can always tune—those are things I would love to clean up, but again I’m happy to be here, happy to be in this moment, so that’s what I’ll focus on for now.”

Hanyu took command of the ice with his “Origin” routine, landing a quad loop, quad Lutz and quad Salchow. However, he made mistakes in the second half when he underrotated and stepped out of the back end of a quad toe-triple flip and then put a foot down on the last jump in a quad toe-double toe. The two-time Olympic champion also popped his triple Axel, but earned a level 4 on all spins to score 194.00 for second place in the long and overall (291.43).

“I’m really satisfied that I could land the clean quad Lutz in my program,” said the skater who turned 25 today. “I’m also happy about the quad loop. Previously, if I was doing the quad Lutz, I was always nervous about the quad loop, because it’s the most difficult jump, and I think the audiences too. But now I have quad Lutz as the second jump. I felt lighter about the quad loop. I also felt the connection with the audience. I’m satisfied with the first half of the program, but regret about the second half. I was so tired in the end that I wasn’t able to hang on to the ending pose. I felt really tired and exhausted. I want to be better.”

Aymoz delivered a near-perfect routine to “Lighthouse” by Patrick Watson which brought his coach, Silvia Fontana, to tears. The only major flaw was a fall on an underrotated quad toe, but the 2019 NHK Trophy silver medalist landed a quad toe-triple toe and five clean triples while showing level 4 spins and footwork. He earned a season’s best of 178.92 for third place in the free skate and overall (275.63), and shared his emotions with the world in the Kiss and Cry.

That’s one happy Kevin Aymoz!! ? He takes home the bronze medal from the Grand Prix Final!

“Going into the (quad) jump I was good,” 22-year-old from Jarrie explained of the fall. “I was good in the air. I was good on the landing, but maybe too good, so I relaxed too much. I’m going to keep working this way for the Europeans trying to keep this dynamism. I want to put another quad in now.”

Russia’s Alexander Samarin finished fourth in the free skate (167.51) and overall (248.83). The 2019 European silver medalist landed a strong quad Lutz-triple toe, but put a hand down and stepped out of quad flip and doubled a quad toe. He was otherwise clean in his routine to “Good News” by Apashe, landing two triple Axels and earned a level 4 on all spins and footwork.

“It was very cool to skate here with an amazing audience and a huge Olympic arena,” said the 2019 Rostelecom Cup champion. “I am very happy to skate among the best six skaters in the world. I can take experience from this, which I still lack, as well as a lot of great emotions.”

“My team and my coaches helped me so much today, to gather myself after the short program and overcome myself,” added the 21-year-old. “I didn’t quite manage to do that yet and there were some big mistakes, but I will. I have so much good support and that helps me. I need to learn from this and analyse my mistakes to help me prepare for Russian Nationals; there is not a lot of time before then and I think that is the most important competition of the year.”

Boyang Jin of China landed a quad toe-double toe and two triple Axels, but fell on the quad Lutz and quad toe in his routine to “The Path of Silence” and “Yellow Moon.” The 2019 Four Continents silver medalist, who also earned level 4 on all his spins, finished fifth (160.77) in the free skate and overall (241.44).

“I think I still have some problems with my physical strength,” admitted the 2016 & 2017 World bronze medalist. “I didn’t adjust myself well enough after the Cup of China, because I qualified for the GPF, quite surprisingly. I think I didn’t prepare well enough for the training and also wasn’t able to do systematic training because I was changing my skates, so I think this is my own problem.”

The 22-year-old from Harbin wasn’t at morning practice as he had done a lot of training the previous day and wanted to conserve his energy.

“Regarding the jumps, my condition here and the practices are actually better than the practices in previous competitions, but I wasn’t able to show them in the free skate,” said the 2019 Cup of China gold medalist. “I think I really need to learn from the experience and be more matured mentally. Hopefully, next time I will be able to perform the best I can.”

Dmitri Aliev of Russia struggled in his “Sound of Silence” routine, taking a falling on a quad toe, triple flip and his final combination spin. The 2019 Rostelecom Cup silver also put a hand and foot down on a triple Axel, but produced a very nice quad Lutz at the beginning of his program. He finished sixth (131.26) and overall (220.04).