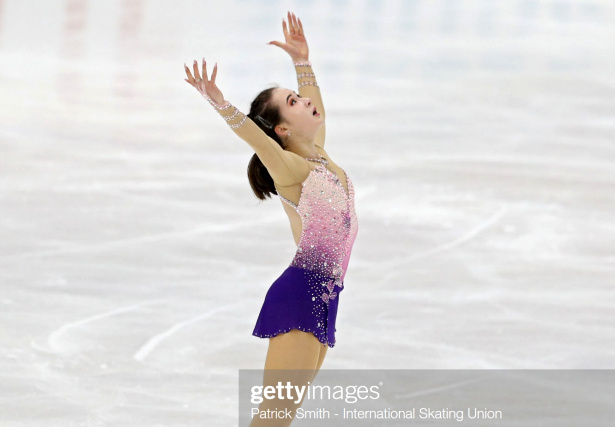 Emily Bausback skates to “My Heart Will Go On” performed by Julia Westlin for her Free Skate.

Skating to music from the Titanic, Emily Bausback toppled the old guard of Canadian ladies skating to win the national title. With five triples, including a double Axel-triple toe combination, Bausback earned 116.64 points for a total score of 175.54.

“I was thinking, ‘Just stay in the moment and take one thing at a time’ and finish all my movements and ‘soak it all in and seize the moment,'” she said about her performance.

Skating early in the final flight, Bausback had to wait for the remainder of the flight to realize her victory.

“There were a million emotions going through my body and a million thoughts and I was just watching people and I was just thinking after every jump they were doing,” said the 17-year-old from Vancouver. “I was thinking, ‘This could be it’, ‘I could win this’ and ‘This could be my title. Seeing all their scores come up and seeing my score still at the top, it was an incredible feeling. The best feeling I have ever had.”

The surprise new champion credits her new focus, in part, for the win.

“I have been working on my performance skills and projecting to the audience and telling my story in both programs,” she said. “Joanne [Macleod] and I, we chose the music. We heard a cover of it and it was so beautiful and I knew that I could sell the program and deliver the emotion. I have been reflecting on the movie and trying to portray the emotion Rose felt when she lost Jack.”

Coming to Mississauga, Bausback speculated that she may have a crack at winning.

“At the back of my mind, I was thinking I could have this in my pocket if I delivered,” she said. “But as I said before, my goal was to end up on the podium, so this was definitely a surprise, but it’s awesome.”

Alison Schumacher joined Bausback on the surprise new podium. With three clean triples, including a triple Lutz, Bausback performed a lovely routine set to “With You” from the Ghost musical.

“I feel really good about it, really relieved,” she said of her silver medal. “Just, no words.”

“I am not surprised about how I skated,” Schumacher reflected. “I can’t control [the results], but definitely I am a little surprised, because it is quite a strong event, but I just did what I had to do. I just wanted to put two solid skates out.”

While Schumacher skated with poise, the warm up was a challenge.

“The warm up was ‘eh,'” said the 17-year-old. “It was not great. It could have been better, but the program was good, so I think just keeping focused and not letting that doubt creep in. It’s really a strong flight, so just focusing on myself was really important for me.”

Skating last in the group, Madeline Schizas managed four clean triple jumps, including a triple flip, in her performance to Sounds of Silence to finish third. She scored 107.41 in the free skate to garner a total score of 168.07 overall.

“It feels really good,” said Schizas about her bronze medal. “I didn’t think about placements coming into this event. I just wanted to skate my best, so I am happy I put out two solid performances.”

“That was not my proudest moment,” she said about the repeated Axel errors. “The four single Axels, I don’t even know what I was thinking and the fourth one was an invalid combo, so there were some mental mistakes, but I think it comes along with experience which you cannot buy. This is my third nationals. Two years ago, I was a mid-ranking novice, so you can’t make up for years of skating at nationals.”

Schizas was a surprise second-place finisher after the short program and skated last in the free skate in which skater after skater delivered performances with mistakes.

“I had been paying a little bit of attention, so I know there was an opportunity and I just had to take advantage of it,” she said.

Michelle Long finished in fifth place with a free skate score of 105.91 for a total competition score of 155.02.

Two-time Canadian champion and 2018 Olympic Champion (team) Gabrielle Daleman finished in eighth place following a disastrous performance in which she fell four times and managed only one triple jump.