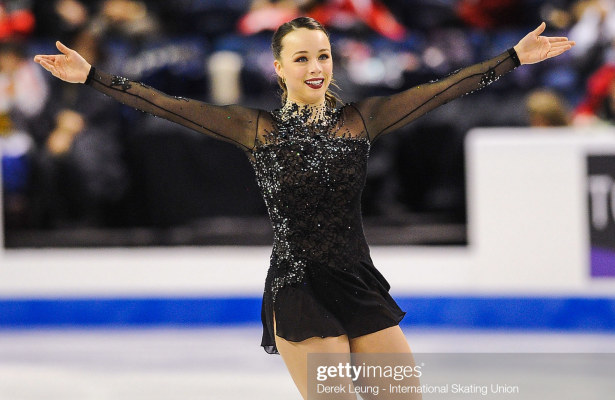 Alicia Pineault of Quebec performs to “Black to Black” by Amy Winehouse for her Short Program.

Last year, Alicia Pineault watched the National Championships in a wheelchair after spraining her left ankle in two places. This year, in Mississauga, Ontario, the animated performer finds herself on top of the standings after a provocative and punchy short program set to “Back to Black” by Amy Winehouse.

Pineault opened with a commanding triple toe-triple toe combination, however, the back end was underrotated. She went on to land a smooth triple loop and double Axel. All three spins and her step sequence were graded a level four for a total score of 63.15.

“I was so blessed to be on the bus going [to the Paramount Fine Foods Centre] and my family is here, my aunt and my grandmother, my sister,” shared the 20-year-old, who was beaming after her performance. “Everyone is behind me and I have a whole team at home. I have learned that there is never a perfect scenario. There is always going to be something that could be better, but I am working with what I have, and right now, I am just even more happy. I am just happier to know that I feel healthy and I am just going to go out there and try my best and see what happens.”

Pineault attributes her strong skate at the Nationals to repeated run-throughs and consistent training. A recent outing with friends helped affirm it.

“I went skating for fun with my friends and they were like ‘Oh my god, you look so at ease and you look like you belong there,'” she said. “Now that I am getting older and am more experienced, I am just more comfortable on the ice than walking. I trip all the time. It’s my nature I guess. I am better on ice.”

A surprise in second place is Madeline Schizas who spooled out a steady string of elements in her short program set to “Stranger in Paradise” by Sarah Brightman. A new senior, Schizas was unfazed by the step up from juniors.

She managed a score of 60.66 thanks to a clean program with level four grading on each of her three spins. Her only obvious error was doubling the second jump of her planned triple toe loop-triple toe loop combination.

“I think that my pick went in a little funny and I doubled the second triple which is a little disappointing, because I hit it in practice,” she explained. “I mean, it happens, but I am still happy.”

Schizas admits she did not have placement goals and does not want to overthink her second place standing, despite the celebration.

“I try not to think too much about the standings, I just wanted to come out here and skate my best,” said the 16-year-old from Oakville, Ontario. “I didn’t really think about where I was going to place. I am just really excited for tomorrow. I am excited to perform again. That is my favorite part of skating. I love to perform for people.”

Two-time Canadian Champion Gabrielle Daleman was steaming mad about her botched short program which included the doubling of the second jump of her signature triple toe-triple toe combination, a step out on the leaning of her double Axel and a wobbly level one flying camel spin. She finished in third place with a score of 59.51.

Between the gritty elements however, the 2018 Team Event Olympic Champion shimmied and scintillated in her routine set to Beth Hart’s “Jazz Man” to salvage the program. She was without explanation for the gaffes.

“It’s been a while for competition, but at the end of the day, that’s no excuse,” she said. “Just like injury is no excuse. Pneumonia is no excuse. Nothing is an excuse. I am not going to be one of those people who is going to blame it on something. It was a bad skate. I’m an athlete, it happens and I am going to put it behind me.”

Daleman remained resolute however, adding that, “Tomorrow is a new day and it’s the free program. A lot can change.”

Emily Bausback finished in fourth place with a score of 58.90, followed by Veronik Mallet (57.94).