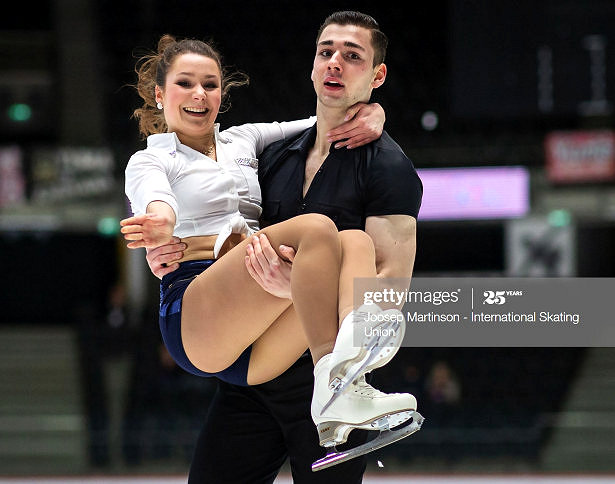 Beginning last spring, German pair skaters Annika Hocke, 19, and Robert Kunkel, 20, started practicing together from time to time just to keep in shape as they were both without partners. When they noticed how well it was going, they decided to team up a few months later, but not many believed their partnership would come to fruition. Last season, they not only qualified for the Junior Grand Prix Final, but finished fourth at the 2020 ISU World Junior Figure Skating Championships, proving to naysayers that their union was a good call.

Like most other athletes, the skaters from Berlin are currently stuck at home due to the corona virus pandemic.

“We keep fit with an off-ice training plan that has been specifically made for us by our new athletics coach,” Kunkel said. “Usually we are do two sessions a day for strength, flexibility, and endurance.”

They are also running outside, which is allowed in various countries as long as the social distancing is observed.

Her partner agreed and he is glad that the two of them are supporting each other in this situation. “It is good that we are together in this and that we can talk to each other about how the training went,” he said. “I don’t know if I would have had the motivation to push the limits every day if I was all alone.”

Coach Rico Rex explained that the German Skating Union has submitted a request to the authorities to allow national team members to train in small groups or single sessions on the ice in Berlin.

“We are now waiting for a reply,” said the coach. “Obviously, we know that the overall well-being of the people has priority,” Rex explained.

Beginning April 20, many shops in Germany will reopen if they can ensure that the social distancing and hygienic rules are observed while most schools will re-open step by step after May 4.

Hocke and Kunkel can’t wait to go back on the ice and continue were they had left off and keep building after a successful maiden season. As Germany’s number two team, they had been selected for the 2020 ISU World Figure Skating Championships. When the event was cancelled, they didn’t lose time and began working on their new free program right away while they still had ice.

Catherine Papadakis, the mother of four-time World Ice Dance Champion Gabriella Papadakis, had come to Berlin and the plan was to fly together to Montreal. When Worlds was cancelled, she decided to stay a few days longer and started to mount the new long program.

“We started Sunday (March 15), but in the evening, she sent a message that she had to return home to France quickly because she might not get back otherwise,” Kunkel said.

The skaters were able to finish the program with their dance coach and choreographer Fabienne Schaerer before the rink closed a few days later. For the music, they picked “The Other Side” by Ruelle, which was Kunkel’s suggestion.

“We listened to a lot of music and we pre-selected some pieces,” he said. “Then we listened to it on the ice and discussed with our coach and choreographer and finally picked this one.”

The pair had planned on keeping their short program, but were worried that they might have outgrown it and that people would associate it with their junior season.

“We wanted to change both programs to make it clear cut that we are now skating as seniors and we aren’t a junior team anymore,” Kunkel pointed out.

“We want to have two different programs to set ourselves apart and also, because you want to show different sides of yourselves,” Hocke added regarding plans for the short program. “We have some suggestions, but nothing definite yet.”

They asked Olympic Champion Aljona Savchenko to do the choreography and she agreed to help them with the program. Right now, however, the skaters are not certain when and where they will be able to meet to begin work. They are also currently discussing music options with Savchenko.

Looking back at their first season as team, Hocke and Kunkel are still amazed how far they had come in a short time and how fast everything happened for them. A year ago, Hocke and her former partner Ruben Blommaert split up shortly following the 2019 ISU World Figure Skating Championships where they had placed 14th. At the same time, Kunkel was skating by himself as his partner Talisa Thomalla underwent surgery after the ISU World Junior Figure Skating Championships.

“I wasn’t really looking for a partner right away,” Hocke shared. “I thought I would have to search internationally and I knew I wouldn’t find someone so quickly. I didn’t think that was a bad thing, because I wanted to have some time for myself to find consistency and to get my joy of skating back.”

However, she and Kunkel decided to train some pair elements from time to time in order to keep fit.

“Annika and I did some lifts off ice and death spirals, as well as some double throws on the ice, but we didn’t think that it was a try-out; we just did it to keep in shape,” said Kunkel.

The skaters realized after a few weeks that they enjoyed skating together and that they were getting along well. They asked Kunkel’s coach, Rico Rex, what he thought of the idea to team up. Then they went to national pairs coach Alexander Koenig.

“I think it was good that the decision came from us and nobody told us to skate together,” Kunkel pointed out.

In fact, he even felt that other skaters at the rink were not in favor of the idea.

“Nobody really said at the beginning ‘this will be great’ and ‘cool that you’re doing that,'” he recalled. “People reacted in a neutral way, but behind our backs they were saying ‘they’ll never do a competition, nothing will come out of it.'”

Their first competition together was at the ISU Junior Grand Prix in Gdansk, Poland, at the end of September 2019 where they won a bronze medal.

“We didn’t expect that, because there was an extreme shortage of time,” recalled Kunkel. “I think the free skate at our first Junior Grand Prix was only our second or third full run-through. We didn’t really have a preparation for the season.”

Even though he and Hocke were experienced pair skaters, they needed to adapt to each other and work out their technique for the pair elements.

“The twist was definitely the hardest element at the beginning,” Hocke said. “It was very weird. We both had a different rhythm, different entry and different technical guidelines.”

Eventually they found a compromise and even were able go with a triple twist into their first competition. Kunkel noted that the lifts were a big change for him as well.

While Hocke had hoped for a top-five finish in their first Junior Grand Prix, she and Kunkel were very surprised to make the podium. The week after, the Germans captured another bronze medal at the Junior Grand Prix in Zagreb, Croatia, and thus qualified for the ISU Junior Grand Prix Final in Torino, Italy – a first for a German Junior Pair team. They competed against five Russian teams that all had much more experience as pair skaters and finished sixth with two solid performances.

“The Junior Grand Prix Final was an extra motivation,” said Hocke. “It really pushed us, because we realized – it is possible. I had watched the Final only on TV before.”

At German Nationals in January, the team took silver, but there were only two teams competing. They continued their successful debut season with a seventh-place finish at the ISU European Figure Skating Championships in Graz, Austria. At Junior Worlds, the ISU Junior Grand Prix Finalists placed fourth and were ranked third in the Free Skating segment.

“Looking back at the Annika’s and Robert’s season, I am very happy that they did so well internationally as a new team,” said coach Rico Rex. “To compete in juniors was the right decision.”

Now it is about moving forward. Sometimes the second season for a new team is harder than the first one. When the honeymoon is over, things might get more difficult.

“As experience tells, it is like in real life,” Rex noted. “In the beginning, there are rosy clouds and there’s lots of euphoria. Then the work on the relationship and on building the future starts. But I have a good feeling concerning Annika and Robert, as both are very goal-oriented and know what they want.”

Another good sign is that the skaters get along well. Together, they got involved in a social project called “Children need fans.”

While they can’t physically train together at the moment, the skaters and the coach remain in touch every day.

“We’re working on a potential plan for the season or we discuss music for future programs,” Rex shared. “We are making plans and we are setting new goals. We want to take one or two steps forward technically, for example with a throw triple Axel or fancier lifts. We need to work on a daily basis on skating skills to reach the world class level in the long term,” Rex explained.

The forced break from training has one positive side for Hocke as she is preparing for her high school graduation exams.

“Now I have more time to prepare for the exams that hopefully will take place,” she said.