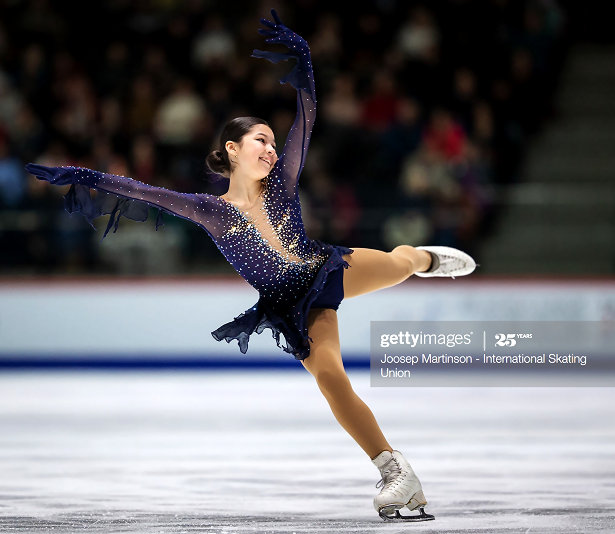 Alysa Liu of the United States competes in the Junior Ladies Free Skating at the the 2020 ISU World Junior Figure Skating Championships.

When USA’s Alysa Liu won her first U.S national title in 2019 at age 13, the youngest U.S. ladies’ national champion in history, she was still too young to compete at the ISU Junior Grand Prix (JGP) circuit for the 2018-19 season. This past year, Liu started her international career with a bang when she debuted at 2019 JGP Placid, making history again as the first American female figure skater to successfully land a quadruple jump, the Lutz. She also landed a triple Axel in the same program, thus becoming the first female skater to land both a triple Axel and quad in the same program.

Liu made the podium in all events she entered for the 2019-20 figure skating season, bagging another gold at JGP Poland and then a silver in the JGP Final. In the second half of the season, she not only defended her national title, but claimed bronze at the 2020 ISU World Junior Figure Skating Championships. Despite all her success, the upbeat teenager is still constantly seeking improvement.

“What motivates me is a lot of different skaters and myself,” the two-time U.S. Champion shared. “I always want to improve myself, I just have a drive. I’m also inspired from seeing other skaters, like (Alexandra) Trusova and (Anna) Shcherbakova doing those quads. I want to keep up with them and step it up.”

“My favorite part (in training) is repetition,” she explained. “That sounds really weird, but I like repeating jumps. I fall and then I land it the next time and that feels good. Or just landing everything, but then I don’t feel super satisfied if I land everything in a session. I’m like, ‘did I improve or did I not learn anything,’ because sometimes failing it helps you. Sometimes when I do bad, but then do really good at the session, I feel very satisfied.”

Like many others, Liu’s preparation plans for the upcoming season were obviously affected by the Covid-19 pandemic, and she was unable to train on the ice for weeks.

“I am trying to do my best to deal with the current situation, doing off ice training and workouts,” the skater noted. “I miss the regular training on the ice a lot and I had a dream about doing a triple Axel.”

The first thing she wants to do when she is back on the ice is “focus on skating skills and jumps.” The World Junior bronze medalist wanted to have two new programs for the upcoming season, but at the time of writing had not yet decided on what music to skate to.

Liu, who has been coached by Laura Lipetsky since she began skating nine years ago, is very committed.

“I think in skating you always want to improve,” said Liu, who trains in Oakland, Calif. “There’s no time to stop or go down. When I train my programs, I make sure that I’m doing everything in my program that I need to be doing. If I mess up on a jump, I’ll repeat it after the program just so that I make sure that I keep up with myself.”

Liu, who will turn 15 in August, is too young to move up to the senior ranks internationally for the 2020-21 season, as are her Russian rivals Kamila Valieva and Daria Usacheva, who claimed Junior World gold and silver, respectively. Nevertheless, Liu actually doesn’t mind staying in juniors for another year.

“It’s more time to train before you go to a higher level internationally,” she pointed out. “I think it’s good that I’m still junior, because I’m one level lower than the very top and I have more time to train.”

At her rink in Oakland, Calif., Liu is currently the only high-level skater and she sees the disadvantages and the advantages of this situation.

“It’s not too competitive in my rink,” she offered, “but I like the competitiveness, because it gets me going more. I think some advantage is that there is more chill at my rink. No one is like speeding right past you.”

Competing internationally was a good experience for Liu and she hopes to build on that. She feels it is a bit more hectic, especially with the the competitive Russian skaters on the ice, as well as having more spectators than she is used to.

Currently, however, there is a big question mark on when any skater will be able to compete this upcoming season. Thus far, the first two JGP events of the season have already been canceled.

Liu, who is the oldest of five children of her family, comes across as a fun, smart kid that loves what she is doing. She does her school online and enjoys spending time with her sisters, brothers and her friends. Her sister Selina,12, actually even started skating as well, but not for long.

“She did skate for I think almost a year maybe, but then at her first competition she got second place and my cousin, who is a boy, beat her, so she got very mad and quit after her first competition,” Liu recalled. The youngest three siblings are triplets, aged 10, and like to skate just for fun.

The skater describes herself as “crazy” but not “annoying”.

“I’m kind of loud at home with friends,” Liu shared. “Some friends are quiet, I’m not. I talk a lot, almost too much sometimes. I like to perform in front of people. In my rink or at competitions, not many people come to watch, you don’t feel you’re at a competition. But when there are people watching you’re like, ‘this is a competition.'”

Liu not only likes to perform herself, but also enjoys watching other skaters perform. She explained that she likes being nervous for other skaters, that it’s the “worst feeling,” but also the best.

“When the person you’re supporting does really good, you’re really happy, almost like you did that program,” she said.

The skater feels a lot of support from her family, especially from her single dad Arthur, a lawyer. He normally attends her competitions.

“I know there’s a lot of skating moms, but he’s like skating dad,” the teenager shared with a laugh. “Sometimes he does (give me advice), but sometimes his suggestions are not so good. I trust myself more with that,” she said with a twinkle in her eyes. “My mom is always texting congratulations after a competition. Right after, I go on my phone and see a ‘congratulations’ text.”

Liu nurtures the hopes of figure skating fans in the U.S. for a new female skating star and there is a lot of attention on her with the Olympic Winter Games 2022 on the horizon. The American will be age eligible to compete in Beijing.

“I don’t actually feel too much pressure like being this and that,” said the athlete in regards to how she’s perceived. “I kind of just do it (skating) for myself and I always want to be my best and beat my personal best.”

“I’m definitely looking forward to it (Beijing),” Liu added. “I just hope I make it, but I do need to work on a few things. I’ve watched Sochi and then Pyeongchang and I can’t imagine the feeling of being there, it’s crazy. I feel it improved from Sochi to Pyeongchang. I think the Olympics are going to keep improving every four years. I dream about going there, but I don’t visualize what is going to happen.”

“Michelle, because she of course she was really young when she was really good and she won a lot of championships,” Liu said. “She stayed in the sport for a long time and I admire her for work ethics. I admire Shcherbakova because of all her amazing quadruple jumps and her skating. She is like the whole package, basically.”