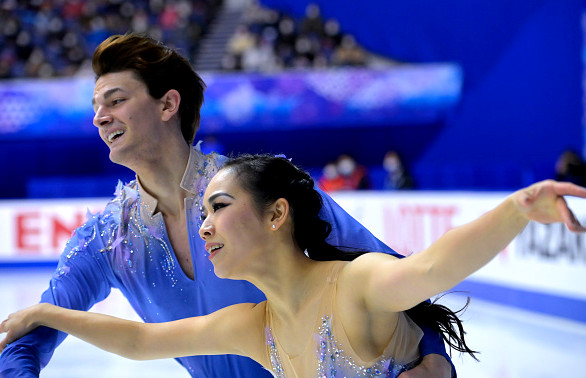 Misato Komatsubara and Tim Koleto maintained their overnight lead in the Free Dance to win their first Grand Prix medal at 2020 NHK Trophy on Saturday. Teammates Rikako Fukase and Eichu Cho and new-comers Kana Muramoto and Daisuke Takahashi battled it out for silver and bronze, finishing second and third, respectively in their Grand Prix debut.

Due to the ongoing COVID-19 pandemic and travel restrictions, the ISU Grand Prix of Figure Skating events are primarily domestically run events with domestic skaters and skaters who train in the host country or respective geographical region. As a result, all teams competing were from Japan.

Komatsubara and Koleto delivered a solid routine to “Une histoire d’amour” for a first-place finish in the Free Dance with a score of 108.29. The two-time and current national champions earned a level 4 for all three lifts, the combination spin, twizzles with positive grades of execution (GOE). The one-foot steps were graded a level 2 for her and three for him, while the midline steps were a level 2. However, they received a one-point deduction for a time violation. Nevertheless, their total score of 179.05 was more than enough to secure the gold.

“I am very happy and proud we skated two powerful programs,” said Komatsubara. “Yesterday, the distance between us was what we worked on and we discussed it, although the morning practice didn’t go that well. So we are being more professional. I am grateful to everyone who made this competition possible. We will continue to do our best.”

“It was difficult to do on-line lessons and we want to work harder, but it felt great,” said Koleto. “This season, we talked and are on the same page, so that was different from last season. I wanted to improve my condition and work together to get on a good wave.”

“Keiji (Tanaka) and other friends have already made it to the Games and I think we are at the starting line,” said Komatsubara on their hopes to qualify for the Olympic Winter Games. “We want to be proud to be Japanese and we want the young ice dancers to be proud of us.”

Fukase and Cho earned a level 4 on their twizzles, two lifts, and combination spin, while the midline steps were graded a level 1. The one-foot steps were a level 2 for her and 3 for him, and they finished second with 94.43 points for their routine to “My Funny Valentine” and “Feeling Good.” With a total score of 157.89, the national silver medalists edged out Muramoto and Takahashi for the silver by 0.64 points.

“The Personal Best was great news,” said Fukase. “The lifts went well, but we made some mistakes we should never make. Being in a real competition was great for us. Lots of events were cancelled or without the audience. The fans were there for us. Our teammates are amazing, so just being in practice, we can learn so much. Training during the quarantine was possible on the ice due to the bubble created by the JSF (Japanese Skating Federation).”

“It was a pretty good performance for us,” added Cho. “We do have some parts to work on. With nationals coming up soon, we will work hard to improve, and with the coaches and JSF help, we will make improvements.”

Performing to selections from La Bayadère, Muramoto and Takahashi  showed level 2 diagonal steps, and the one-foot steps were graded a level 3 for her and 2 for him. Two of the lifts were graded a level 3, while the rotational lift was a 4. Unfortunately, Takahashi stumbled and fell during the twizzle sequence, and they finished third in the free dance (93.10) and overall (157.25).

“In today’s free, I made a mistake and I hate that,” said Takahashi of the fall. “I realize the challenges and motivation and everything here. Even in practice, I don’t make such a big mistake on the twizzle and other mistakes in the transitions. So I guess that is what the competition means.”

“We are happy to have made our debut,” said Muramoto. “We were calm, but made mistakes we never do, so there are many things to work on, but I feel that we can do better at the next competition. We learned how to regroup and get back in sync, so that was good learning. There were little mistakes in the lifts, the twizzles and transitions. The takeaway is that we got a feel for the levels we can get so we will work on that.”

The newly-formed team is now focused on the upcoming Japanese Figure Skating Championships and are aiming for a spot on the Olympic team next year.

“We are a team that has just started,” Muramoto pointed out. “We are all excited and coaches are telling us that we will bring a new breeze into this world, so we are just excited to have started.”

“There are still three weeks, so I think we will focus and work hard,” said Takahashi regarding nationals. “Also we are getting all eager.”

Takahashi, the 2010 Olympic bronze medalist in the Men’s discipline, has had to train a great deal with the transition into the world of ice dance.

“I had to change meals,” he noted. “In singles, I had to refrain from eating, but now it was about weight training and eating more. I stop breathing in my lifts, so still lots to work on. The single skater in me is still there, so every day I heard instructions on the free leg, toes and hold.”

What are your thoughts on the Ice Dance event? Discuss here.