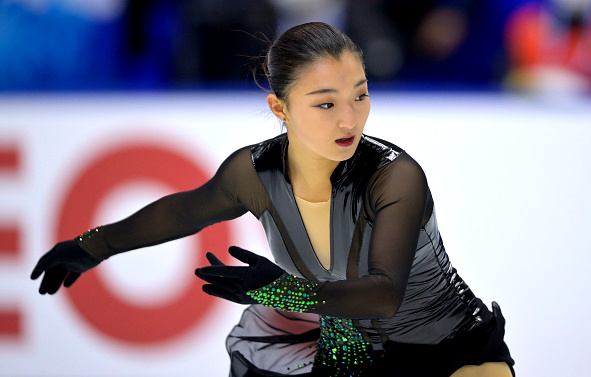 Kaori Sakamoto of Japan maintained her overnight lead to win the Ladies at the 2020 NHK Trophy after the Free Skate on Saturday in Osaka, Japan. Teammates Wakaba Higuchi and Rino Matsuike earned the silver and bronze, respectively.

Due to the ongoing COVID-19 pandemic and travel restrictions, the ISU Grand Prix of Figure Skating events are primarily domestically run events with domestic skaters and skaters who train in the host country or respective geographical region. As a result, all ladies, except for Young You (KOR), were from Japan.

Sakamoto put out a very solid program to music from The Matrix soundtrack, earning positive grades of execution (GOE) for all jumps. She landed a total of seven triples, including a triple flip-triple toe, as well as producing level 4 spins and footwork. The 2018 Four Continents champion earned 153.91 points for the free skate and her total score was 229.51.

“Last season, I was not able to skate this program clean because I lacked stamina,” 20-year-old Sakamoto offered, regarding her six-week quarantine. “I couldn’t skate for a month and a half, so I was able to work more on my strength training and maybe that has contributed to no major falls this season. These six weeks have helped. I have more power than last year, so stamina is helping me in putting more effort into the expression of the music and other parts of the program.”

Higuchi slightly under-rotated her opening triple Axel as well as the last jump in a triple Lutz-triple toe in her routine to “Poeta” and “Flamenco Passion & Soul.” She also stepped out of a double Salchow and doubled a Lutz. However, two spins and her footwork earned a level 4 with positive GOEs and the 2018 World silver medalist placed fourth (131.27)  in the free skate. With a total score of 200.98, she was able to maintain second place overall.

“When I jumped I also thought that maybe it was a q,” said the 19-year-old of the quarter under-rotation on her triple Axel. “I lacked lift or height, but was a bit delayed in rotating. That may be it. I was able to land it in this atmosphere so training is paying off.”

“I really had to hold it there and I was happy, but realized that I need to focus so I changed my mindset,” Higuchi said when asked about her smile after landing the triple Axel. “I have practiced that I will remain calm after the Axel to really focus on the triple-triple. The atmosphere with the audience is both a joy and tension of a real competition, so I welcomed it.”

Matsuike received an edge call on both her triple flips, but otherwise showed a clean skate that featured four clean triple jumps, including a triple Lutz-double toe. All spins were graded a level 4 with positive GOEs and she scored 133.23 for second place in the free skate after her performance to “Perhaps Love” by Jones Denver. With a total score 0f 198.97, she rose from fourth to third overall in her Grand Prix debut.

The skater from Nagoya said she has always aspired to compete at NHK Trophy and that being on the podium is a dream come true.

“It is something I’ll never forget and it is a real confidence booster for me. Yesterday, I didn’t think I would be in the second group, so I was nervous,” admitted the 16-year-old. “I told myself that it is an honor to be skating here at NHK Trophy, so I wanted to enjoy every moment. I realized that the senior-level skaters have more energy and use the whole rink and look larger, so I learned a lot and will work on that.”

Mai Mihara, who stood in seventh after the short, placed third in the free skate (131.32). The 2019 Four Continents bronze medalist slightly under-rotated the back end of both a triple Lutz-triple toe and double Axel-triple toe combination, but otherwise showed a total of four clean triples, including a triple Lutz-double toe-double loop. She also earned a level 4 for all three spins in her routine to  “Fairy of the Forest” and “Galaxy” by Yuko Toyoda. With a total score of 194.73, she moved up three spots to fourth overall.

“Today, I put out everything I had and I was determined to skate my maximum for practice and competition,” she said. “The crowd welcomed me back and I can’t thank them enough. There were banners and standing ovations from some so I am grateful. In both the short and free, I am not at the level to compete with others. This event and at other events, I need to move forward one step at a time but here, I maybe took five steps forward. This was my fourth competition since I made a comeback, so at Nationals, I hope to move forward. I haven’t thought about changes to the program yet. We’ll probably stick to this, but refine the jumps and steps to a higher level. All the elements are things I should be able to do, so it’s about refinement.”

“It was not the best (performance), but with my triple-triple and everything, there were no major mistakes,” added the 21-year-old in the post-press conference. “From the beginning to the end, I lacked power, so at Nationals I would want to show more energy. I need to work on my stamina. I was able to be a better forest fairy that I can be, but not ready to show Lori (Nichol, choreographer) yet. I need to evolve more and hope Lori will say it is getting good.”

Young You of South Korea landed a triple Axel, but still struggled with other jumps in the free skate, placing fifth (126.17) in this segment of the event. With a total score of  181.73, the 2020 Four Continents silver medalist managed to move up five spots to seventh overall.

The 16-year-old said she felt more comfortable today than yesterday, but admitted that the practice was not her best.

“Today’s performance was not perfect, but I was better in my choreography,” she said. “I hope the audience saw that. It wasn’t in the details, but the overall program.”

“I learned a lot from this competition,” You added. “It was different from last year. I couldn’t practice as hard, everybody is getting tired with the COVID. Even though it is tying us down, I can practice, and next season, I will not be in a panic like yesterday and do better.”

Mana Kawabe of Japan finished sixth in the free skate and overall (122.08 / 185.70) in her Grand Prix debut at this event. She attempted a triple Axel but it was under-rotated.

“I could have done better,” said the national junior champion. “It was the best practice and still it ended up in mistakes, so I will work harder for nationals. Anxiety played a role today in competition. Ms. Hamada (coach) said the mistake in my Axel should not affect my Lutz. It made me nervous to perform with the crowd, but it was nice to hear them clapping. I guess it’s all about my mental strength. Compared to the seniors, I still have a large gap, but I know I am growing. I need more practice but it’s all about what I have done that makes me today.”

Mako Yamashita, who stood in third, slipped to fifth overall (186.13) after finishing seventh (118.57) in the free skate. The 2018 World Junior bronze medalist under-rotated her opening quad Salchow, stepped out of triple Lutz, and popped a triple toe.

“I was relieved after I finished,” admitted the 18-year-old. “At the morning practice, I was asked what to do with the quad (Salchow) and in the six-minute warm up I said I will give it a try. I made the final decision after my warm up. The other jumps are not at an ideal level, so I was a bit hesitant, but I thought it would be for my good if I attempted it. The Lutz in the second half was clean but the loop has been a major concern since I came here. Even with the quad, I can’t afford any mistakes.”

What are your thoughts on the Ladies’ event? Discuss here.