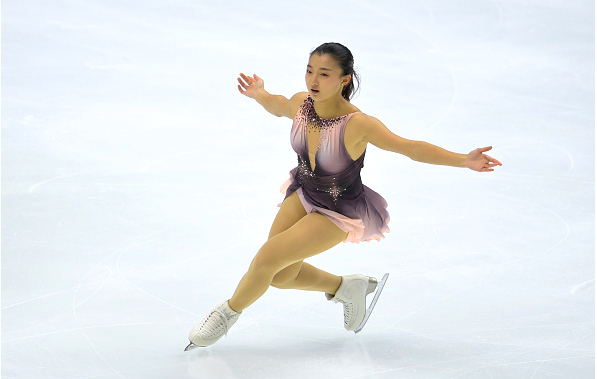 Kaori Sakamoto leads the Ladies after the Short Program concluded at the 2020 NHK Trophy in Osaka, Japan, on Friday. Teammates Wakaba Higuchi and Mako Yamashita are in second and third place, respectively.

Sakamoto ticked off each element in her program with, landing an excellent double Axel, triple Lutz, and triple flip-triple toe. The 2018 Olympian earned a level 3 on two of her spins and footwork, but all elements received many positive grades of execution (GOE). She scored 75.60 points.

“I was able to skate a good short program and I feel relieved,” said the 20-year-old. “It was for the first time that I had the (triple) Lutz (in the Short Program) for five years and I was able to skate clean. It is very motivating to skate in front of an audience. In the free program, I hope to have more energy and to keep my position.”

Higuchi fell on her opening triple Axel, but recovered to land a triple Lutz-triple toe and triple flip in her program to “Bird Set Free” by Sia. The 2018 World silver medalist earned a level 4 on two spins and footwork to earned 69.71 points.

“In my Axel, my axis was off so that was a mistake, but I was able to regroup and remain calm to land the next two jumps,” explained the 19-year-old. “It was the first time to attempt a triple Axel in the short program, because I need to earn points. The entry into my Axel will be different in the free skating and I have long practiced this one so, I will feel more confident.”

Yamashita earned 67.56 points after a strong skate to “Una voce poco fa” which featured a triple loop, triple Lutz-triple toe, and double Axel. The footwork was graded a level 2, but all spins garnered a level 4.

“I did all my jumps and the skating overall went very well. I wasn’t nervous,” said the 2018 World Junior bronze medalist. “It was really nice to skate with an audience. The best thing about my program was that I did the triple-triple combination in the second half of the program.”

Rino Matsuike under-rotated the first jump in a triple flip-triple toe, but was otherwise clean in her performance to music from The Color Purple. The 16-year-old from Nagoya also showed a triple Lutz and three level 4 spins to score 65.74 for fourth place in her Grand Prix debut.

Yuhana Yokoi opened her skate to “Nandemonaiya” with a solid triple Lutz-triple toe, but later slightly under-rotated a triple flip. The 2019 Finlandia Trophy bronze medalist sits in fifth with 65.18 points.

Young You of South Korea finished a distant 12th (55.56) after under-rotating several jumps and falling on a triple Axel and triple Lutz.