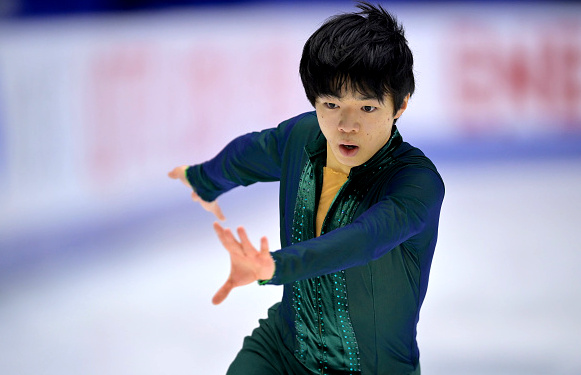 Due to the ongoing COVID-19 pandemic and travel restrictions, the ISU Grand Prix of Figure Skating events are primarily domestically run events with domestic skaters and skaters who train in the host country or respective geographical region. As a results, all competitors in this discipline were from Japan.

Kagiyama was near solid in his routine to selections from the Avatar soundtrack, reeling off a quad Salchow, quad toe-triple toe, and quad toe. He landed a total of six clean triple jumps, including two triple Axels. The only mistake came when he singled a loop in combination with a triple Lutz. The 2020 Four Continents bronze medalist earned a level 4 on all spins and garnered many positive grades of execution (GOE) to place first in the free skate (188.61) and overall (275.87).

Tomono doubled his opening toe, turned out the landing on a quad Salchow, and doubled a flip combination his skate to Moulin Rouge. The 22-year-old from Osaka landed a quad Salchow-double toe, but received an edge call on a triple Lutz and singled the first jump in a triple Axel-Euler-triple Salchow combination. He finished third in the free skate (145.35), but with a total score of 226.62, maintained second place overall.

“The practice and the warm up felt good, but at the end, I was not aggressive enough,” Tomono said. “I was too careful and the jumps ended up as doubles. I need to trust my training more. I want to be more confident, and for that, I need to train harder.”

Honda finished sixth in the free skate (138.34), but was able to maintain third overall with a total score of 217.56. The national junior bronze medalist popped his opening triple Axel and doubled a loop, but managed to hang on to a second triple Axel. He also landed two clean combinations, both a triple Lutz-triple toe.

“My free was not that great, but I was surprised again,” said the 18-year-old. “I didn’t really worry about the placement today. I just wanted take in the atmosphere here with the audience. Two competitions in a row, I had ended with a double loop. The Axel was good and the combination is getting better.”

“Going into Nationals, I will need to rest a bit after two back-to-back competitions, so I will work on the triple loop,” he added. “Of course if I can land quads in practice, I want to try them in the program. The quad toe is so far the best, so I will start with that. With this tough schedule, I think I had to pace myself and not overdo it since I had an injury. I have to work on not being too tired going into a competition. I just enjoyed it and with the audience as well. It felt great.”

Keiji Tanaka landed a quad Salchow-double toe, but popped both his triple Axels in his routine to music from the Sherlock Holmes soundtrack. Nevertheless, he earned a level 4 on all spins and footwork, placing fifth in the free skating with 138.95 points. With a total score of 215.52, the 2018 Olympian was able to maintain fourth overall.

“It’s not the placement, but there was a lot to do coming into the Free and there were so many things I didn’t get right,” said the 26-year-old. “I landed one quad, so it was a step forward from yesterday. Missing the Axels is a terrible outcome. I popped the Axels and the coaches said the back outside edge going into takeoff was a bit weak.”

“After my injury, this was my third competition and it didn’t worsen,” he added. “I am actually starting to feel better and it’s important to improve through competitions. I wanted more from NHK Trophy, but I will work on them going into the Nationals.”

Shun Sato, who stood in seventh after the short, finished fourth (142.71) in the free skate and fifth overall (215.52). The 2019-20 Junior Grand Prix champion landed two quad toes, but fell on an under-rotated triple Lutz and stepped out of the back half of a triple flip-Euler-triple Salchow.

“I am relatively happy with today’s performance,” said the 16-year-old. “The quad (toe) was good. Now I am feeling better, now it’s about landing the (quad) Lutz. I lost the timing for triple flip and switched to quad Lutz.”

The skater said he pulled his neck while practicing for the triple Axel, but it was treated and he said he’s “OK.”

“I need to revisit the elements and check if it is the right ones and I want to make the necessary adjustments,” he added. “Yesterday I was so tense, but today I was able to relax and the six minutes warm up was good. It was too much for me to try two Axels today and the flip turned out to be a Lutz. I am not yet at the level I want to be with this program. In the seniors, I have to have more quads and other things I am not used to. I want to go over what worked for me in the Juniors and fine tune my program.”

Kao Miura landed a quad Salchow and quad toe-triple toe, both of which received high GOEs. However, he doubled his opening toe, stepped out of a triple Axel and triple flip. The 15-year-old finished second in the free skate (143.69), and with a total score of 210.53, rose from eighth to sixth place overall.

“I couldn’t pick up pace in practice, but it went well at the NHK Trophy,” he said. “I was able to regain myself after missing my first jump to the quad. There are more problems. I still lack stamina, so I need to work on it. I got tired and my legs weren’t moving. I had fun! I want to skate at NHK Trophy again. I want to work on the issues I discovered here and make improvements.”

What are your thoughts on the Men’s event? Discuss here.