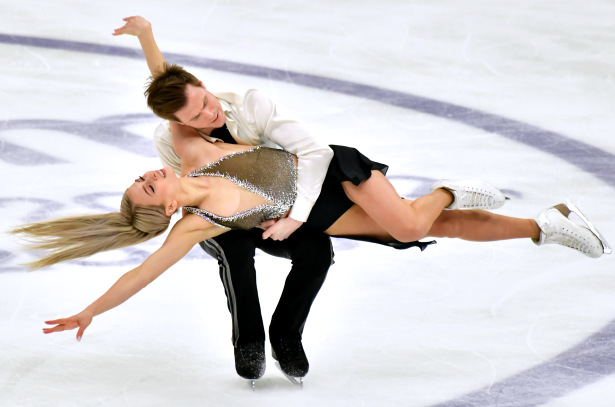 Victoria Sinitsina and Nikita Katsalapov of Russia perform their Free Dance at 2020 Rostelecom Cup in Moscow.

Sinitsina and Katsalapov put out an engaging routine to a Michael Jackson medley which opened with very strong level twizzles that garnered nearly all 5+ in grades of execution (GOE) across the board. The 2019 World champions also earned a level 4 on the curve and stationary lift, as well as the serpentine steps, but they struggled in the rotational lift which was graded a level 1. They earned 126.38 for first place in the free dance and overall (217.51).

“It was our first full competition and full run-through of the free dance and we really felt the support of the crowd,” Sinitsina said. “Unfortunately, we made an error on the lift. We hope to improve and to skate without mistakes next time.”

Zagorski and Guerreiro were solid in their buoyant “Survivor” routine which featured level 4 lifts, twizzles, and one-foot steps. Only the diagonal steps were graded a level 3 and the 2018 Olympians easily finished second with 122.45 points in the free dance and overall (206.91).

“It is our third Grand Prix medal, but we’d never got a medal at our home Grand Prix in Moscow,” Guerreiro said. “We think we gave two good performances. We feel like it is a breakthrough for us to show the program the way it is supposed to be.”

Skoptcova and Aleshin scored 119.50 points, finishing third in the free dance and overall (199.25). The 2018 World Junior champions showed level 4 twizzles, lifts, and midlines steps in their edgy dance to music from Fifty Shades of Gray.

“For us, it is very important and exciting, because this is our first (senior) Grand Prix medal,” Skoptcova said. “Obviously, the Grand Prix format is different this year, but nevertheless, there were strong couples competing and they were not only from Russia.”

Russia’s Elizaveta Khudaiberdieva and Egor Bazin finished fourth in the free dance and rose one spot to fourth overall (117.08 / 193.18)  after their expressive routine to “Experience.” The new team showed level 4 twizzles and lifts, as well as good level 3 circular and one-foot steps.