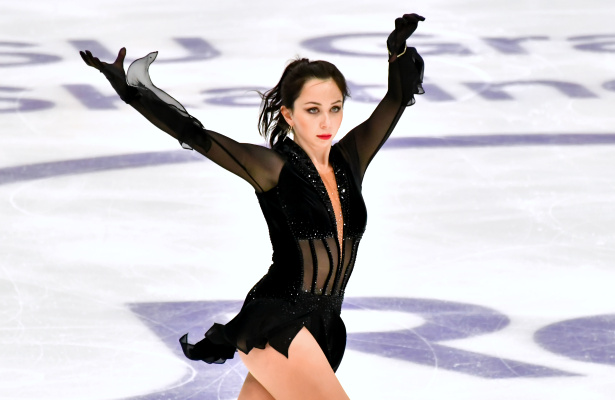 Russia’s Elizaveta Tuktamysheva rose from second to clinch the gold after the Ladies’ Free Skate concluded on Saturday at Rostelecom Cup in Moscow. Teammate Alena Kostornaia slipped to second by a few mere points, while Anastasiia Guliakova captured the bronze in her Grand Prix debut.

Performing to “Chronicles of a Mischievous Bird” by Russian composer Bhima Yunusov, Tuktamysheva opened with a triple Axel-double toe, but then stepped out of her second Axel. That was the only error the 2015 World champion made, however. She landed five more clean triple jumps, including a triple Lutz-double Axel, and received a level 4 on two spins. The skater scored 148.69 points to win the free skate, and with a total score of 223.39, rose to the top of the podium.

“I was not confident of victory as the competition was very strong,” admitted the 24-year-old. “It was a nice surprise and a nice ending to this Grand Prix.”

“It was a great atmosphere and great support and I did not want the program to go downhill,” she added. “The music keeps building and it is such a rare chance now to perform in front of an audience. I fed off the energy of the crowd and I gave energy back.”

Kostornaia landed four clean triple jumps, but under-rotated her opening triple Lutz (in combination with a double toe) and both jumps of a triple flip-Euler-triple Salchow. She otherwise gave a stirring performance to Romeo and Juliet and W.E. which featured two level 4 spins, scoring 141.94 points for second place in the free skate. Her total score was 220.78, and she slipped to second overall by less than three points.

“I knew that Lisa (Tuktamysheva) had skated very well as I watched her while I was waiting at the boards for my turn,” added the 2020 European champion. “I just went out to do my job, but not everything worked out. Obviously, you need jumps like the triple Axel and quads to compete at the highest level, so it is in my plans and I’m working towards that.”

Guliakova under-rotated four triple jumps in her routine to “Don’t Say You Do” and “Real Boy” by Lola Blanc. She did, however, land a triple Lutz and triple loop, and showed two level 4 spins to earn 128.96 points. With a total score of 199.03, she rose from fourth to third overall to capture bronze in her Grand Prix debut at this event.

“It was my first Grand Prix and I am happy that I was able to give two decent performances,” Guliakova said. “There still were some errors and we’ll keep working on that. When I saw my score, I did not think it would be enough to be on the podium, so I am very happy now.”

Russia’s Alexandra Trusova struggled in her “Romeo and Juliet” routine, falling on three quad attempts as well a a triple Lutz. The mistakes were costly and the uncharacteristic falls not only impacted the flow of the program, but clearly affected the skater as two of her spins and footwork were graded a level 3. As a result, the 2020 European bronze medalist placed fourth (128.12) in the free skate and slipped to fourth overall (198.93).