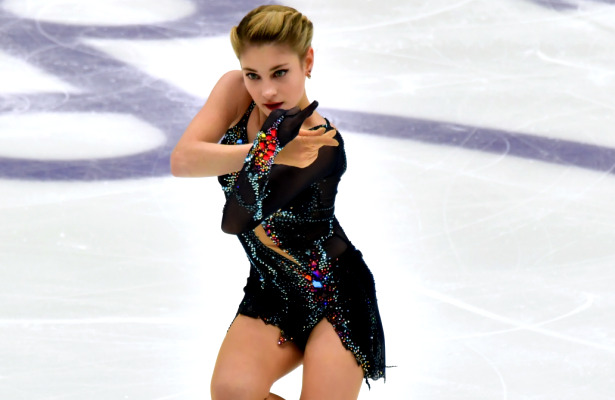 Alena Kostornaia of Russia dominated the Ladies event in the Short Program at the 2020 Rostelecom Cup in Moscow on Friday. Teammate Elizaveta Tuktamysheva finished second, while Alexandra Trusova sits in third.

Kostornaia was solid in her performance to “No Time to Die” and “You Should See Me In a Crown” by Billie Eilish. The 2020 European champion delivered a double Axel, triple Lutz, and triple flip-triple toe—all of which received positive grades of execution (GOE). While the footwork was given a level 3, the spins were graded a level 4, and she scored 78.74 points to lead the pack by four points.

“There is something to compare,” said the 17-year-old, referring to her previous competition at a Russia Cup event a week ago. “This was better and I am very happy about that. I did not change anything in my training process after Kazan and I had a rest. Then I realized that I need to work on harder.”

The skater, who remains undefeated in international competitions since last season, hopes to bring back the triple Axel for the Russian National Championships.

Tuktamysheva impressed with a huge and easy triple Axel in her “Spartacus” program, but then stepped out of a triple flip which was meant to be in combination with a triple toe. However, she followed up with a triple Lutz-double toe and showed level 4 spins to collect 74.70 points.

“The mistake was unexpected, because the combination has been working well,” Tuktamysheva said, regarding the mistake on the flip. “But something was off in the warm-up and I started to think about the technique too much. It is better to switch off your mind and trust your body.”

“Overall I am pleased with the performance,” added the 23-year-old. “It was one of the best short programs this season so far if you don’t count the mistake on the flip.”

Trusova took a fall on her opening triple Axel and then received an edge call on a triple flip. Nevertheless, the rest of her routine to “Love Story” and “Appassionata” was solid. The 2020 European bronze medalist delivered a triple Lutz-triple toe and all spins were graded a level 4. She was awarded 70.81 points.

“This is the third competition I couldn’t do the (triple) Axel,” the 16-year-old said. “I will work harder and will try to do it clean. We are skating the program a lot in practice and I am always trying to forget about a mistake and do the rest clean.”

In her Grand Prix debut, Russia’s Anastasiia Guliakova landed a triple flip-triple toe, double Axel, and triple Lutz, however, the Lutz received an edge call. All spins were graded a level 4 and she scored 70.07 points.

Russia’s Anna Shcherbakova withdrew before the Short Program due to illness.

What are your thoughts on the Ladies’ Short Program? Discuss @ GS Forums.