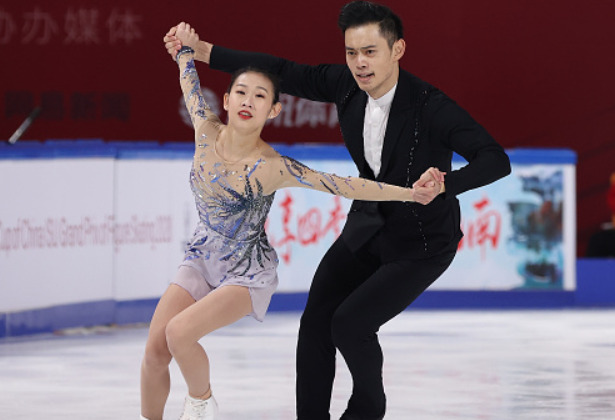 Cheng Peng and Yang Jin perform their free skate at 2020 Cup of China in Chongqing, China.

Cheng Peng and Yang Jin maintained their overnight lead to win the gold at the 2020 Shiseido Cup of China in Chongqing on Saturday. Yuchen Wang and Yihang Huang finished second for the gold, while newcomers Daizifei Zhu and Yuhang Liu took their first Grand Prix medal—the bronze.

Peng and Jin delivered a near-solid performance, opening with strong side-by-side triple Salchows in their routine to music from the Cloud Atlas soundtrack. The only mistake came when Peng doubled her jump on the toeloops. The 2020 Four Continents silver medalists otherwise executed an excellent triple twist, throw triple loop, and throw triple Salchow—all of which received very high grades of execution (GOE). The lifts and spins were graded a level 4 and the team earned 148.28 for first place in the Free Skate and overall (223.90).

“Today we skated better and more relaxed than yesterday in the short program,” Peng said. “Also, since we are skating this program for the second season, we feel more experienced with it. We have not changed it because of the pandemic, but also because we felt we have not yet shown the full potential of this program.”

“We are really happy to come here and to compete with our teammates,” Jin added. “We are just focusing on executing and completing our elements. We will analyze this competition and learn from it.”

Wang and Huang showed a level 4 triple twist and a triple toe-double toe combination in their routine to selections from The Lone Ranger soundtrack. While the pair combination spin and Axel lift were graded a level 4, Wang fell on the triple Salchows while he doubled his. She also fell on the throw triple loop. The national junior champions received a score of 111.84 for the free skate and 175.40 overall in their Grand Prix debut.

“Overall, we skated pretty well and showed what we can do in training,” Huang said. “Today we tried the throw triple loop for the first time (in competition). We had some mistakes and we want to make up for it next time.”

Zhu and Liu had two falls in their program to “Suite from Mulan” from the Mulan soundtrack, but landed a throw triple Salchow and showed two level 4 lifts. The new team from Beijing scored 86.00 points in the Free Skate and 140.37 overall.

“I feel like we had a few mistakes today,” observed Zhu. “We’re not able to show what we could do in our training.”

“This competition is a challenge for us,” added Liu. “Anything can happen in competition, including mistakes. We need to learn how to adjust mentally.”