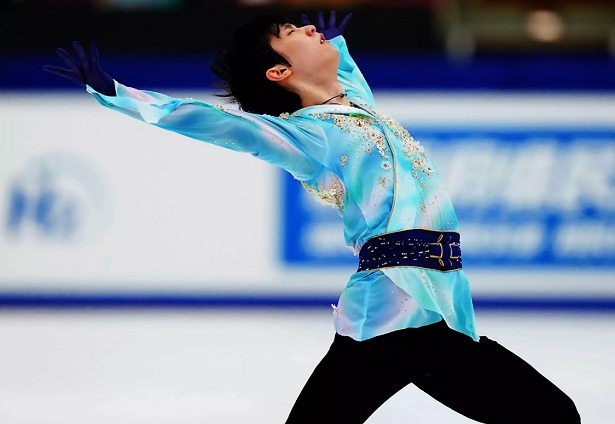 Hanyu was solid in his impressive “Heaven and Earth” routine, landing a total of four quads: loop, Salchow, toe in combination with a triple toe, and toe in combination with a Euler-triple Salchow—all of which garnered many positive grades of execution (GOE). The two-time World champion also landed a two triple Axels and showed two level 4 spins. The only small glitch was that his final spin, the change foot combination spin, was graded a “V” for not meeting all the revolutions, but it still earned a level 3, as did the footwork. He scored 118.61 for first place in the free skate and overall (319.36).

“Last year, my result was very frustrating,” said the 26-year-old. “I wanted to do better this time, but it was more important to me that I didn’t give up in times like these. It would have been disrespectful to my coach not to give my best.”

“I took part in this competition in order to be able to participate in the World Championship later on, if it takes place,” he added. “If I don’t take this step, it will be difficult in the future. Now that the world is so dark because of corona, I want to reach out to the light.”

Hanyu admitted that he was on “his own” for a long time after the pandemic hit and he began to have doubts. Even so, he still continued to connect with those around him during his training and received a lot of advice from “afar” and was grateful for that.

“Last season, I was not so good and I had the feeling after the Grand Prix that I had couldn’t improve and that I had not fought enough,” he shared. “I believed I had been too tired to fight. I could always quit, but there are many people who support me and would certainly be very disappointed about it. I had a lot of doubts, but I realized that the best way to get rid of them was to compete, which is why I want to continue. The statue of Uesugi Kenshin motivated me a lot. The way he fights and his philosophy touched me deeply. My situation is similar to that of Uesugi Kenshin and I could identify with him.”

In fact, his free skate represents this. The pose at the beginning of the program represents the front arm and is the armor of a samurai. “Plus, you have to imagine the helmet,” Hanyu explained. “I used the title of the taiga drama Ten to Chi to, but for me, it is ‘Ten to chi no hito’ (Man between heaven and earth). My arm is the transition where I am, above is the sky and below is the earth.”

“At the beginning of the piece, I imagine that I am fighting,” he continued. “Then the part with the Biwa begins. This is not part of the actual piece and was cut in by me. It symbolizes that I actually don’t want to fight, but have to in order to protect my loved ones. The biwa as an instrument was best suited for this. I wanted to bring in typical Japanese elements with the traditional instruments. For me, it represents the battles of Kawanakajima where (Uesugi) Kenshin and Takeda (Shingen) fight each other. I developed many different versions of the piece, but since I’m not a professional musician, I just adapted it to the step sequences and my choreography.”

Uno, who was third after the short, opened with a quad Salchow and quad toe, but then popped second quad toe, planned in combination with a double toe, to a triple. To compensate, he later changed out a planned triple Salchow-triple toe with a quad toe combination, but the second toe was downgraded. The Olympic silver medalist also landed a solo quad toe and two triple Axels and showed two level 4 spins in his routine to “Dancing On My Own” and “Your Last Kiss” to score 190.59 points. He finished second in the free skate and moved up one spot to second overall with 284.81 points.

Uno didn’t think much about going into the free skate in third place. In fact, he said he felt very calm as opposed to the day before.

Uno noted that Hanyu didn’t make any mistakes during the morning practice and that it was very different from last year in terms of physical condition.

“His success rate was very high and he was able to give the same performance in the competition as he did in training,” Uno pointed out. “That is really very difficult and I found that very admirable. My goal is to become like Hanyu. I am motivated to have found a goal again after such a long time.”

Skating to music from the Avatar soundtrack, Kagiyama opened with a quad Salchow, but then stepped out a quad toe and received an edge call on a triple flip. The 2020 World Junior silver medalist also landed a a quad toe-triple toe and two triple Axels. The second triple Axel was in combination with a Euler-double Salchow and the Euler was downgraded, but he earned a level 4 on two spins and scored 180.19 points for third place in the free skate. With a total score of 278.79, he slipped from second to third overall.

“This event was the one I was most nervous about this season,” admitted the2020 Four Continents bronze medalist. “After hearing Uno’s score, I got even more nervous. Last year I was third and I really wanted to do better this time. I didn’t do very well, but I gave everything I could. My first spin was not so good, but I was able to recover on the second jump. The triple Lutz-triple loop worked our for me.”

“I am also very happy to have participated in this competition,” added 17-year-old Kagiyama. “This time, my goal was to finish in the top three. Therefore, I am satisfied. Of course, I am a little frustrated that my program was not completely flawless, but overall I am happy.”

Keiji Tanaka finished fourth in the free skate (155.22) and overall with 238.83 points. The two-time national silver medalist put a hand down on his opening quad Salchow as well as a triple Axel, but otherwise produced a quad Salchow-double toe in his performance to music from the Sherlock Holmes soundtrack.

Shun Sato struggled with several jumps, but managed a clean quad toe-triple toe to come in sixth in the free skate (153.21) and fifth overall (236.52).

What are your thoughts on the Men’s Free Skate? Discuss here.