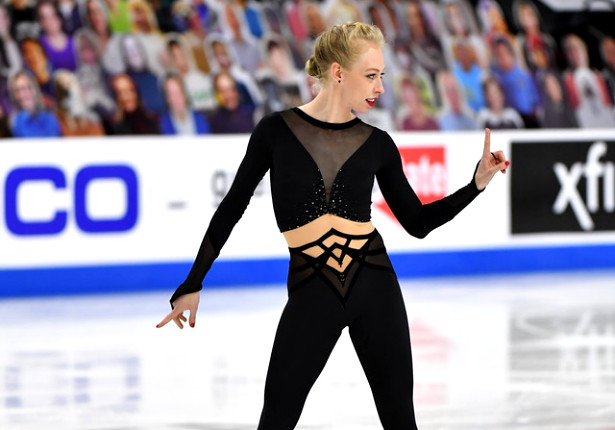 Skating to “Moderation” by Florence and the Machine, Tennell landed a double Axel, triple Lutz-triple toe, and triple flip—all of which received positive Grades of Execution (GOE). The 22-year-old also earned a level four on all three spins and footwork to score 79.40 points.

“I’m really happy with the way I skated tonight, and I think I really went out there and attacked it,” said the 2020 Four Continents bronze medalist. “I’m just really happy with everything that’s been going on this year that I was able to put out a performance that I’m really proud of.”

Tennell’s coach, Tom Zakrajsek, is not in Las Vegas for safety reasons as one of his students, Paige Rydberg, tested positive for COVID-19. Not having her head coach at competition is a new experience for Tennell.

“He’s here with me in spirit,” said Tennell. “It’s been a bit strange, especially since all the recent changes I made. I don’t remember when life has gone according to plan, so I’m kind of just trying to dodge and weave and roll with the punches. I’ve trained so hard for this and all the work is already done, so I feel really good about being here and performing to my best. I know that if I need anything, I can just call up Tom and he’ll be there for me.”

When asked if Zakrajsek’s absence was planned and if he was at home, Tennell responded, “That’s not my story to tell.”

Liu gave a strong performance to La Strada which featured a triple flip, double Axel, and triple Lutz-triple toe. Like Tennell, the 15-year-old earned many positive GOEs for her jumps as well as her three spins and footwork—all of which were graded a level four. She scored 76.36 points.

“I’m glad I could do my program how I do in practice,” said Liu. “It’s my first and last competition of the season so I’m really happy I got to skate.”

The 15-year-old doesn’t plan to do a triple Axel in the Free Skate.

“I’m not thinking about placements, but just doing my best in the long program,” she said. “I’ll think about the actual results when they come out.”

Bell was near-solid in her routine to “Glitter in the Air” by Pink with the exception of a slightly under-rotated triple Lutz. The 2020 Skate America champion otherwise produced a triple flip-triple toe, double Axel, and earned a level 4 on all three spins to earn 72.37 points.

Karen Chen put out an expressive routine to “Rise” by Katy Perry, but under-rotated the last jump in a triple Lutz-triple, while the first jump, as well as a solo triple loop, were deemed “slightly” under-rotated. Still, the 21-year-old earned a level 4 on two spins and her footwork to score 70.99 points.

“Training has really paid off and I feel like I’m in a good place going into the long program,” said Chen.

Amber Glenn attempted her first triple Axel in competition, but it was under-rotated. Nevertheless, the rest of her program to “Scars” by Madilyn Bailey was clean and included a triple flip-triple toe, triple loop, and level four on all spins and footwork. She sits in fifth with 70.83 points.

“I originally planned to try the triple Axel at Skate America, but I was in a off-ice accident and had a concussion and face fracture (mid-Sept),” said the 21-year-old. “I’ve been training it, so decided to try it. I finally got it out of the way!”

The Ladies’ event will conclude on Friday with the Free Skate.