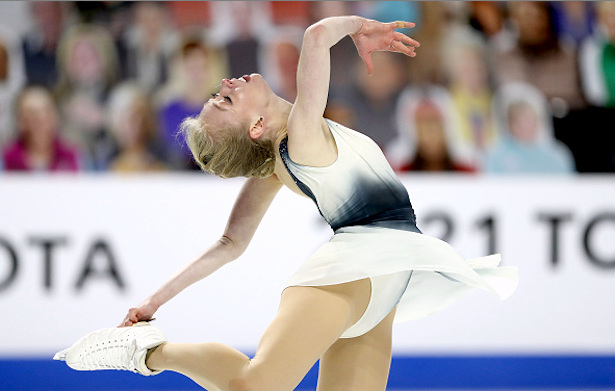 Tennell slightly under-rotated the last jump in her opening triple Lutz-triple toe, but was otherwise very solid in her performance to “Sarajevo” and “Dawn of Faith.” The 2020 Four Continents bronze medalist went on to land five more clean triples, including another triple Lutz-triple toe, and earned a level four on her footwork and two spins. She scored 153.21 points for first place in the free skate and maintained first overall with 232.61.

“I’m kind of speechless actually,” said the 22-year-old. “That was exactly the performance I wanted to give and I enjoyed every second of it. I’m so happy and so grateful that we have this opportunity and that I was able to perform the way that I wanted to. I felt very in command and Tom (Zakrajsek) helped me with that.”

“I’m going to continue to training as if Worlds is happening,” Tennell responded, when asked about training moving forward. “Obviously, I would love for it to happen, and if it does happen, I’ll be there and I’ll be ready to do my job and fight for our three spots. But of course we have to take into consideration the pandemic and make sure that it can be held safely, because the number one priority is obviously the health and safety of every one involved.”

Glenn flowed through her routine to “Rain, in Your Black Eyes” with a quiet confidence, landing all six triple jumps without err, including a triple flip-tripe toe and triple Lutz-double toe-double loop. The 2019 U.S. International Classic bronze medalist also picked up a level four on all of her spins and finished second in the free skate with 144.50 points. Her overall score of 215.33 was enough to move her up three places into second.

Glenn, 21, revealed earlier that she had a foot infection which was giving her problems yesterday. Today, she learned that the infection traveled up to her knee (right leg) and resulted in a swollen calf and shin, and was put on a course of antibiotics.

“I’m very happy that we were able to have this event during this pandemic and it’s been handled so well,” said Glenn. “I’m so happy that I was able to perform like I do in practice. To be with such a great group of competitors is so motivating. I was just happy to finally put out a performance I’m proud of.”

Glenn stepped back from the sport completely for a season in 2015 to evaluate. She came back to the sport in February 2016 with a new mindset and started training under Peter Cain and Darlene Cain. She finished eighth in both 2017 and 2018, seventh in 2019, and fifth last season.

“I was in utter shock to be honest,” responded Glenn, dodging the answer when asked what she said at the end of her program. “It didn’t feel real. That was a personal best in a free skate by about 15 points and a good 25 points for a national championship free skate.”

“Of course I would love to be on the World team,” said Glenn, echoing Tennell on Worlds. “It would be an honor to be able to make it onto the team. If Worlds happens, US Figure Skating should go with a team that they know will go and get those three spots back. Whether that includes me or not, I’m all for it either way. I’ll be happy with whatever decision they make because I know they will make the right one. Whoever goes, I will be cheering for her to get those slots.”

Chen showed elegance and maturity in her routine to “Butterfly Lover Concerto” by Takako Nishizaki. The 21-year-old opened with a double Axel-triple toe and triple Lutz, but received an edge call on the triple flip. She also underrotated a triple loop, but recovered to produce a triple Lutz-double toe-double loop and earned a level four on her footwork and two spins. Her triple loop, in combination with a double toe, was slightly under-rotated, as was a solo triple Salchow. The 2017 U.S. Champion scored 143.99 points for third place in the free skate and overall (214.98).

The skater was happy with her program, but felt she left a lot of points on the table. While she had visualized the skate of her life, she made what she called “silly” mistakes.

“Regarding next season, obviously it is the most important for everybody, but for me, this year I grew a lot as a skater and I hope to continue this momentum,” said Chen. “The biggest thing is consistent training, staying injury-free, and working on the triple Axel is the main goal for next season.”

Chen also said she would continue to train in case Worlds takes place.

“I love to train, so that’s not going to be a problem,” she said. “It’s definitely a tricky situation that’s all out of all of our control. We just have to see how everything plays out.”

Chen relayed that returning to the podium was an “incredible experience” and that she felt like a veteran as it’s her third bronze medal. She also revealed that she may keep the same long program for next season as she hasn’t had a chance to compete it as much as she’d like.

Alysa Liu, who stood in third after the short, landed three clean triple jumps in her routine to “The Storm” by Balázs Havasi.  The two-time and defending champion slightly under-rotated a triple flip and the back-end of a triple Lutz-triple toe, but showed three level-four spins and footwork to score 137.03 for fourth place in the free skate. With a total score of 213.39, she slipped from the podium by 1.59 points.

Mariah Bell struggled in her free skate, under-rotating and falling on a triple flip and stepping out of a triple loop. The 2020 Skate America champion also slightly under-rotating the first jump in a triple Lutz-double toe-double loop and another triple flip. She finished fifth (127.58) in the free skate and slipped from third to fifth overall (199.95).

Update: US Figure Skating announced on Saturday that Chen and Tennell were selected for the World team. Glenn, Bell, and Shin are alternates, respectively.