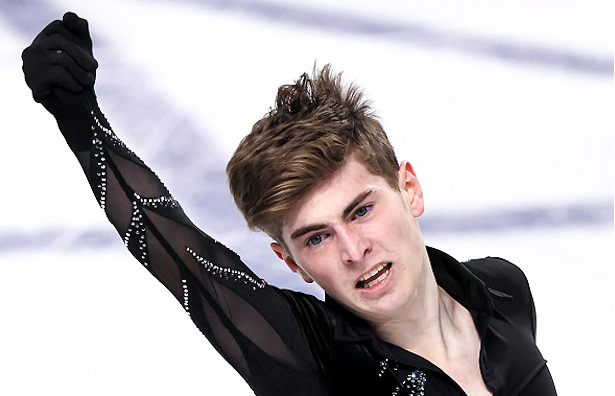 Mark Kondratiuk performs his free skate in his debut at the 2021 Russian Figure Skating Championships in Chelyabinsk.

Who is Mark Kondratiuk, the figure skater that came out of nowhere to claim the bronze medal at the Russian National Championships last December? Who then stole the show at the Channel One Cup team competition this month? Chances are that most fans, especially those outside of Russia, have never heard of the 17-year-old who has yet to compete in a grand prix or ISU championship event.

All that has changed. Kondratiuk is now a contender for the Russian World team. There are two spots for the Men and the Figure Skating Federation of Russia has only selected Mikhail Kolyada (National Champion) thus far. The second spot is up for grabs and the final decision will be made at the Russian Cup Final which will be held February 27 to March 2 in Moscow.

“I do think about this possibility (to get the second spot), but I just need to work and skate well at the Russian Cup Final,” noted Kondratiuk. “Then whatever happens, happens.” Before saying this, the skater had just turned in a career-best performance in the team competition, reeling off three quads – one toe and two Salchows. “This was the best I’ve ever done, score-wise and element-wise,” he said. “My performance at Russian Nationals has given me confidence and I focused on this event as I always do, like for an important competition and not for a show.”

Kondratiuk debuted at Russian Nationals at the senior level and shocked everyone, including himself, when he skated off with bronze. “I am still in shock that it ended that way,” he admitted. “There were a lot of emotions and they were all very diverse—happiness, tears, relief—all that together. I’ve never felt like this.”

The 17-year-old ranked third in the short program and was second in the free skate but remained in third overall.

“During quarantine we were not resting on the sofa,” the teenager recalled. “I think we had maybe one week without training, the first one. But even then, Artur (Danielian), myself and some others went running in the park. After that we had off-ice training, worked on jumps, choreography, and pumping up. We had a training process, just without ice. It seems to me that in the summer, after quarantine, I started to approach the jumps with more confidence. It was like I forgot that I was afraid to do them.”

Svetlana Sokolovskaia, his coach for seven years, confirms that she saw a change in her student in the summer.

“He just has grown up!” she said. “It became embarrassing for him to fall and to lag behind the others all the time. Something changed in his consciousness.” Sokolovskaia pointed out that she always believed in the skater.

The coach pointed out that Kondratiuk had a lot of support from his family and that the family stood behind her, the coach, as well. “The parents kept saying ‘he’ll get there.’ He has a great family and they did everything for him.”

In the summer, Kondratiuk first learned the quad toe and then the quad Salchow, to his own surprise.

“When quarantine started, I thought it would be very difficult to get back the jumps, but in fact it was not,” the Russian bronze medalist explained. “On the first day, at the first practice (on ice), I did the triple Axel. And I started to try quads. A few days I kept falling, but the coaches said I can land them and one day just landed one, the quad toe. A few days after that I did the Salchow and after that the loop. I am not ready to do the loop yet in competition, but I’ve done it in practice.”

Sokolovskaia, who saw his progress over the past few months, was not too surprised about how well her student did at Nationals and at the team event.

“He has been skating well in practice and when I saw this, my hopes grew that he’ll do it in competition,” she noted. “When he did three out of five clean run-throughs, I was kind of ready for the performances we saw now.”

Kondratiuk has two new programs this season and both are modern arrangements of well-known pieces: “Summertime” (arranged by Larry Adler) for the short program and “Swan Lake” (After the Nightmare by Dark Tenor) for the Free Skate. Both routines were choreographed by Nikita Mikhailov, who also suggested the music.

“In the free, I love both parts of the music,” said the skater. “The first part is really classical; it is a genius piece of music. And the second part is very strong. I don’t know how it is like for others, but when I am listening to it, I feel this energy in the music. This is probably helping me not to lose steam at the end of the program as I am trying to keep up with the music.”

The Muscovite enjoys the short program as it is fun and upbeat and he feels it suits his character very well.

“I am a cheerful person, but sometimes there are sad moments,” he shared. “But mostly I am happy and I am probably even an optimist.” Coach Sokolovskaia agreed: “He is funny, but he can listen and he can understand the subtext. He does not get upset easily. He will draw his own conclusions.”

Kondratiuk needed his optimism when he lost more or less two complete seasons due to injury problems. When he was 13, the skater was diagnosed with Osgood–Schlatter disease, a painful inflammation of the patellar ligament in the knee that affects mostly boys when they are growing.

“I missed one season completely,” he recalled. “I wasn’t even skating, and in the second season, I was just trying a little bit. I thought about quitting. I thought, if it is that painful, I probably can’t do it (skating). But I felt it would be stupid to stop because I was told that this will go away with time. So, I decided to wait, to heal and see how it goes.”

When he came back, it took some time to get back on his previous level. “I remember that I was falling on a double toe. I couldn’t do it because I forgot it, although I had done triples just some months earlier.”

Kondratiuk focused on school during that time. He is now in 11th grade and will graduate from high school this spring. His favorite subjects in school are history and geography and he also enjoys reading and modern art. He actually began painting three years ago after watching a movie about modern art. He then traveled to Tate Modern in London which inspired him further. His favorite artists are the American artist Jean-Michel Basquiat and Russian painter Kazimir Malevich.

“I can be inspired by very different things, but mostly by other arts like movies, books, music, theatre, and so on,” the skater explained.

Last summer Kondratiuk had a personal exhibition and has also participated in about seven collective exhibitions.

“The most memorable one was held by an organization that is supporting homeless people,” he revealed. “I gave a performance there that was about humanity and help for people.”

He is also collaborating with musicians and has created covers for singles and albums. “Once I did the cover of a single for a rapper in the USA and another album had like half a million listenings. That was nice!”

Now Kondratiuk is preparing for the Russian Cup Final that could become another milestone in his career.

“He still needs to work a lot on skating skills and we need to clean up everything,” Sokolovskaia said. “We’ll probably keep the same jump content for the short with two quads and maybe we’ll add a second triple Axel in the free. We’ll see how it goes. He needs to skate clean in practice.”