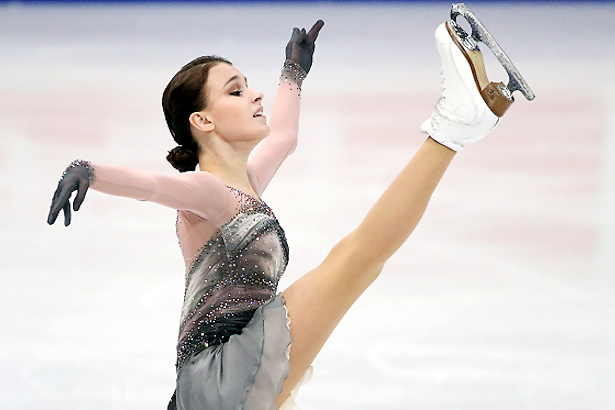 The Ladies’ event concluded with the Free Skate at the 2021 ISU World Figure Skating Championships on Friday night in Stockholm, Sweden. All three ladies that represented the Figure Skaters of Russia (FSR) medaled with Anna Shcherbakova winning the gold, while teammates Elizaveta Tuktamysheva and Alexandra Trusova took silver and bronze, respectively.

Shcherbakova underrotated and fell on her opening quad flip, but rallied  to land seven clean triple jumps—including a triple flip-triple toe, triple Lutz, triple flip-Euler-triple Salchow, and triple Lutz-triple loop—in her exquisite routine. The 2020 European silver medalist, who turns 17 on Sunday, also displayed two level four spins to finish second (152.17) in the free skate. With a total score of 233.17, she easily maintained first overall in her debut in this event.

“Honestly, I don’t know what to say after my performance,” said the three-time Russian champion. “I really tried to do my best and fight for every element. I’m not satisfied at all with my performance, but I’m so happy I’m first. It was my goal, thank you so much everyone! It was a real fight for me because from the first element, everything was not like I wanted. I understood that now I can try to do my best on every element and not lose points.”

Tuktamysheva turned out her opening triple Axel (in combination with a double toe), fell on an underrotated triple flip, and slightly underrotated the backend of a triple Lutz-triple toe, but otherwise landed a second triple Axel, as well as three more triple jumps. The 2015 World and European champion also earned a level four on two spins in her innovative routine to “Chronicles of a Mischievous Bird” and placed third (141.60) in the free skate and second (220.46) overall.

“The feeling is amazing!” said the 24-year-old. “I didn’t want to think about the placement nor podium when I was coming here. Deep down I was hoping that perhaps after all I’d medal and when it happened, the emotions were incredible! I am so happy and am so in peace with myself now. I did all I could and am second. I’m so satisfied, thanks to Mishin and Prokofieva, it was all for them.”

Her next goal is to make the Olympic team.

“I will do all I can to make it happen,” said Tuktamysheva. I’m thrilled about the pre-Olympic season and being second at the Worlds will give me the motivation and the will to keep working. I want to continue developing just as figure skating develops, not to be left out, but to improve. I don’t feel the responsibility as such, but I want to show the women in figure skating that everything is possible and that medals at the Worlds at the age of 24 is a proof.”

Trusova, who was 12th after the Short Program, won the free skate with 152.38 points. The 2020 European bronze medalist made five quadruple attempts and fell on two—a quad Salchow and quad Lutz—while the opening triple flip received an edge call. She also underrotated and turned out a quad toe (in combination with a Euler-triple Salchow), but managed a solid quad Lutz-triple toe. Her routine to music from the Romeo and Juliet soundtrack also featured an triple Lutz-triple toe along with three level-four spins, and catapulted to third overall with a total score of 217.20.

“Obviously, I am not satisfied with my performance today, I wanted to do it clean,” said the the 16-year-old. “In the future, I will do my best to show clean skating.”

“When you have an unsuccessful performance, you need to forget about that right away and just move on,” Trusova said regarding her short program. “Everybody helped me after the short program. I got a lot of calls from my parents, they showed me my dogs and my cat on the phone. Dmitri Sergeevich (Mikhailov) also called me right before the warm-up and Evgeni Viktorovitch (Plushenko) helped me on site. They all helped me to concentrate.”

Trusova told the press she has no intention of changing coaches despite any current rumors.

“I can’t say my free skate was perfect, but I did everything I could possibly do and I fought for it,” said the 21-year-old. “Because of that, I’m honestly proud of myself.”

Chen plans to work on a triple Axel for next season and was thrilled about gaining another spot for the U.S. ladies for the Olympics.

Loena Hendrickx, 21, of Belgium came from 10th place after the short to fifth overall (208.44) after finishing fourth (141.16) in the Free Skate. The 2021 Challenge Cup champion gave a solid performance which featured six solid triple jumps, including a triple Lutz-triple toe and triple flip-double toe-double loop. She also produced level-four footwork and spins in her routine to music by Beyoncé.

“I wanted to achieve what I did tonight, skating clean, because in training I did do a lot of clean programs, so I wanted to be as good as I am in practice,” said the three-time national champion. “I think I proved it and I’m happy about my skate tonight.”

“The most important thing is to stay healthy and injury free, to enjoy skating and training as I do now,” said Hendrickx of what comes next. “I will have two new programs next season, so a lot of work is ahead of me. I will be trying to achieve more technical points in my programs and I will try to be better and better every time I compete.”

Japan’s Kaori Sakamoto turned out the landing of a triple flip (in combination with a triple toe) and received an edge call on a triple Lutz, but was otherwise solid in her dynamic “Matrix” routine. The 2020 NHK Trophy champion produced a total of six clean triple jumps, including a triple flip-triple toe and triple flip-double toe, to finish fifth (137.42) in the free skate and sixth (207.80) overall.

“For my first triple-triple jump I did a three-turn, but in the second half I was able to skate as planned and my jumps were good,” said Sakamoto. “As for the score, it just is what it is. I feel that the error in the Lutz in the short program and free program were a big blow. I guess that happens and I’m still a little bit frustrated, but this is the kind of thing I need to experience, so I will accept it. I will work on that as my number one focus.”

Teammate Rika Kihira, who stood in second after the short program, had an off day after falling on an underrotated triple Axel and then underrotating a triple Salchow (in combination with a triple flip-Euler) and triple Lutz. The two-time ISU Four Continents champion finished ninth (126.62) in the free skate and slipped to seventh overall (205.70).

In her debut at this event, Olga Mikutina of Austria landed a total of seven triple jumps, including a Lutz-triple toe, to finish eighth overall (198.77).

“I was very excited,” said the 17-year-old Ukrainian-born skater. “I know that for every athlete this is a big competition. Actually, it should be like any other competition, but still I felt quite excited and finally somehow I was able to loosen up in my program and show what I do in training. It was my best performance, my best score here and I’m very happy!”