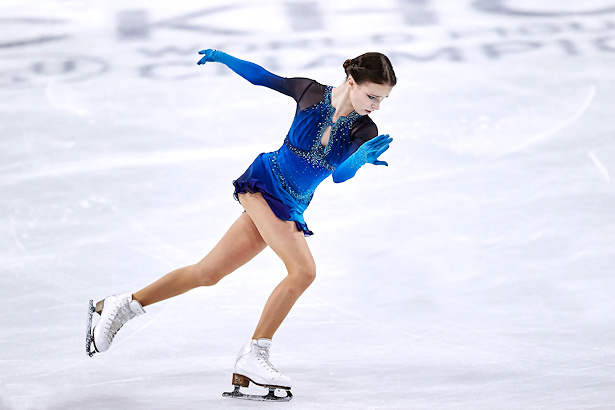 With a lot of high expectations, Shcherbakova did not disappoint. The 2020 European silver medalist gave a solid performance to “O doux printemps d’autrefois” which featured a double Axel, triple flip, and triple Lutz-triple loop. All jumps were solid and all elements received many high positive grades of execution (GOE), including three level-four spins. The three-time Russian champion earned 81.00 points for her effort in her debut at this event.

The 16-year-old admitted to being very nervous, but said she controlled every movement and was happy that all of the elements were successful.

“Most of all I am satisfied with the jump combination, because it was the most difficult and most important element of the program,” said Shcherbakova.

“I work a lot in trainings and I don’t want it to be wasted,” she added regarding her ability to focus during performance. “I want to get the results on the competitions. We work hours every day to show everything during these few minutes.”

Due to the pandemic, the event is being hosted in a bubble without an audience.

“The support from the audience is very important,” pointed out Shcherbakova. “I know that there’s a big support now, a lot of people write that they support me from their homes. It is also very important for me, but I miss full stands of people supporting you before the start and during the performance. Maybe for this reason I was very nervous, but I understand why the restrictions are needed.”

Kihira had a slight underrotation on her triple Axel and the back end of a triple flip-triple toe, but was otherwise solid in her engaging performance to “The Fire Within.” Her triple Lutz received many positive GOES as did her level-four spins and footwork, and the two-time Four Continents Champion sits in second place with 79.08 points.

“I managed all the jumps, but my triple toe wasn’t combined too well with the flow of the program,” said the 18-year-old. “I want to work on that for the free skating and do better. I didn’t give 100 percent and will have to work on my mental strength and rethink how I use my time before the tournament.”

The two-time national champion was thankful to all the people who helped get her to this point and wanted to give back the “gratitude in the rink.”

“That’s why I did my best for the jump,” said Kihira. “I still have to work on my program, but I’m happy that I didn’t make big mistakes and landed every jump. For my free skating, I’m going to do more difficult things like a quad Salchow and triple Axel, so I want to concentrate on training them, give my best, and enjoy the performance.”

Kihira doesn’t train the quad Salchow every day and leaves it out of her training when she’s tired.

“When I’m in a good condition, I can jump three or four times a day, but it’s like a wave,” she explained. “In comparison to the last season, I became better and better, so I want to concentrate on the quad Salchow tomorrow and the day after tomorrow and try to put on a good performance.

Tuktamysheva has had a consistent triple Axel this season and showed it in her incredible routine to “Lovely” by Billie Eilish. The 2015 World and European Champion also landed a solid triple Lutz-triple toe and triple flip while displaying level-four spins throughout. She is in a very close third at 78.86 points.

It’s been long since I’ve been to Worlds and Europeans, so it meant even more for me to do a clean skate,” said the 24-year-old. “Raising my fist at the end of the program, it was my best skate this season and am thrilled it happened here at worlds.”

“The triple Axel right now is in a good working condition,” she added. “I worked on it a lot. I knew there was still the whole program to come and I was only feeling relieved after the triple flip when all the jumps were behind me.”

“I’m really happy with my performance,” said the 21-year-old. “Coming here, I felt a lot of pressure and I haven’t been to Worlds in such a long time and I’ve definitely been struggling in the past with injuries and what not. But to be here and skate a really solid short program is such a great confidence booster for me and I’m really happy to keep that momentum onto the free skate.”

“I definitely feel like I’m a totally different person and skater,” said Chen when comparing herself to 2017. “I feel like I grew a lot when I was at college (she started her freshman year at Cornell in 2019). Just being on campus and being around other students gave me perspective in life. It also made me realize how much I love skating—I’m addicted to skating and it’s something I truly love. I know that as I get older, it’s definitely going to be more challenging, and now is the time to pursue my skating goals. I just have a better grasp and a better perspective on my life and my goals and it’s really helping me with my training and my consistency.”

Yelim Kim travels as the new Korean Champion to Stockholm in her first appearance at this event. The 18-year-old from Gunpo was solid, landing all her jumps including a triple Lutz-triple toe, double Axel, and triple flip. All spins were graded a level four and she earned 73.63 for her performance to Liebesträume, placing fifth.

“First of all, I still can’t believe that I skated a clean program and that I received such a high score!” said the 18-year-old. “And this being my first World Championships. So I hope to complete this competition with no regrets.”

Japan’s powerful Kaori Sakamoto delivered a playful routine to “Concerto in D minor, BWV. 974: II. Adagio” and “Bach A La Jazz,” but had to hang on to a triple Lutz that received an edge call. The 2018 Four Continents Champion was otherwise clean and showed a strong double Axel as well as a triple flip-triple toe. All spins were graded level four and she sits in sixth place with 70.38 points.

“If we just look at the skating, I wasn’t stable before my Lutz and the landing after my triple-triple was a little bit late,” pointed out the 20-year-old. “The rest I did well. The flip (in the combination) was very good and helped me out.”

“There’s a distinct contrast between the first and second halves of this short program,” she added. “The first half is rather soft and smooth, whereas the jazzy second half only has steps and spins, so I wanted to make sure to perform in a way where those watching could feel the excitement.”

USA’s Bradie Tennell received an edge call on her triple Lutz-double toe combo (a triple triple was planned) and the back end was slightly underrotated. However, the 2020 Four Continents bronze medalist showed lots of confidence as she landed a solid double Axel and triple flip in her routine to “Moderation” by Florence and the Machine. She is currently in seventh place (69.87).

“I think my timing was just a bit off,” said the 23-year-old. “It’s very strange because my (triple) Lutz combo is one of my most solid jumps, so I’m pretty disappointed with that skate. I’ve been skating a clean short program every single day since nationals, so to come here and put out a program like that is very surprising to me and I’m pretty unhappy with it, actually. I think I really let myself down there.”

Tennell plans to look ahead and leave the Short Program behind.

“Obviously, I want to come out strong and put out the best program I possibly can, which is no more than what I’ve been training,” she said. “I’ve been training very well and very solid. I just want to go out there and enjoy myself in this very strange circumstance that we’re in. I’m so grateful that we have the opportunity to compete here in a bubble at the World Championships and I just want to go out there, enjoy myself and put out the best skate possible.”

Alexandra Trusova (FSR), who sits in 12th, struggled in her short and it was costly (64.82). The 2020 European bronze medalist received an edge call on a triple flip and stepped out of a triple Lutz. The triple Axel wasn’t going well for the 16-year-old during practice and she opted not to do it.

“I think I couldn’t handle my excitement,” said the feisty teen. “I’ve been getting really nervous at competitions lately.” She would not confirm the number of quads she has planned for the Free Skate. “You will see everything in the program. I will not say anything.”

Mae Berenice Meite of France withdrew during the short program and was evacuated on a stretcher after she sustained a painful injury from a fall on a triple loop attempt. Hong Kong’s Yi Christy Leung withdrew prior to the event citing injury.

The Ladies’ event will conclude on Friday with the Free Skate.